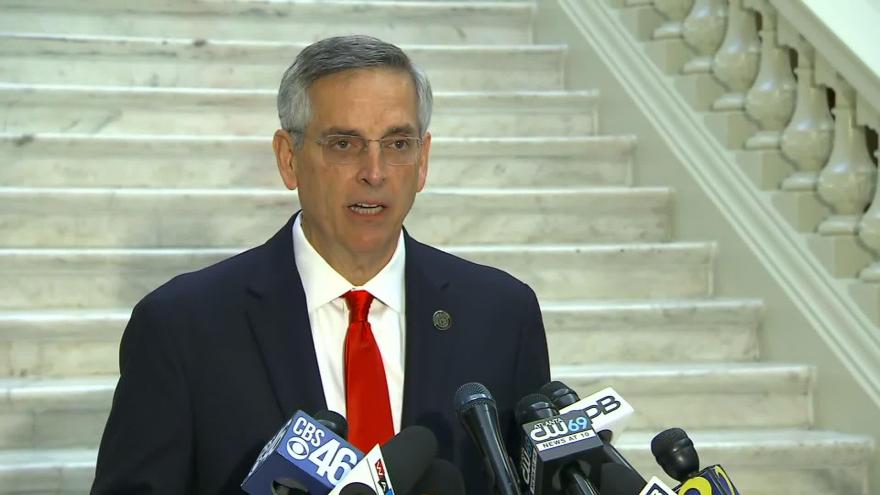 (CNN) -- Georgia Secretary of State Brad Raffensperger on Monday rebuked calls from Republican US Sens. Kelly Loeffler and David Perdue to resign as both of their Senate races appear to be headed for a January runoff.

"Earlier today Senators Loeffler and Perdue called for my resignation," Raffensperger, who is also a Republican, said in a statement. "Let me start by saying that is not going to happen. The voters of Georgia hired me, and the voters will be the one to fire me."

"As Secretary of State, I'll continue to fight every day to ensure fair elections in Georgia, that every legal vote counts, and that illegal votes don't count," Raffensperger continued.

"I know emotions are running high. Politics are involved in everything right now. If I was Senator Perdue, I'd be irritated I was in a runoff. And both Senators and I are all unhappy with the potential outcome for our President."

Earlier Monday afternoon, Loeffler and Perdue called for Raffensperger's resignation in a joint statement that bemoaned the state's election process without offering any specific evidence to back their claims.

"Georgians are outraged, and rightly so. We have been clear from the beginning: every legal vote cast should be counted. Any illegal vote must not. And there must be transparency and uniformity in the counting process," the pair said, echoing President Donald Trump's false claims that illegal ballots are shaping the election.

Raffensperger, they maintained, "has failed the people of Georgia, and he should step down immediately."

Georgia Republican Gov. Brian Kemp's press secretary, Cody Hall, similarly said in a statement that Raffensperger should "look at any and all voting irregularity allegations" but stopped short of calling for his resignation.

"Georgians deserve to have every legal vote counted in order to have full confidence in the outcome of our elections," Hall said.

On Capitol Hill Monday evening, Loeffler refused to respond to questions from reporters about Raffensperger's statement.

Perdue is leading Ossoff by more than 88,000 votes, but has not received the more than 50% of votes needed to prevent a runoff.

"My job is to follow Georgia law and see to it that all legal votes, and no illegal votes, are counted properly and accurately," Raffensperger said in concluding his statement.

"As Secretary of State, that is my duty, and I will continue to do my duty. As a Republican, I am concerned about Republicans keeping the U.S. Senate. I recommend that Senators Loeffler and Perdue start focusing on that."