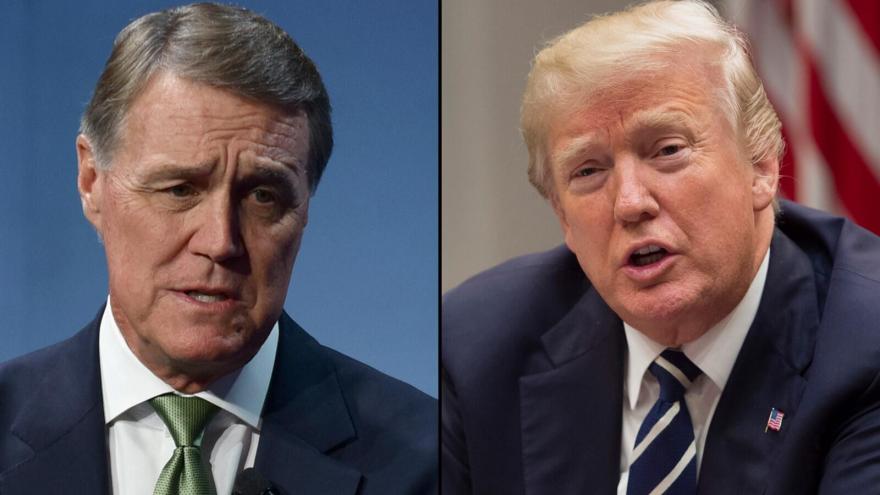 Republican Sen. David Perdue of Georgia spoke to President Donald Trump this week to personally lobby him to sign into law the omnibus spending bill that includes $900 billion in coronavirus relief, a person familiar with their conversation told CNN.

(CNN) -- Republican Sen. David Perdue of Georgia spoke to President Donald Trump this week to personally lobby him to sign into law the omnibus spending bill that includes $900 billion in coronavirus relief, a person familiar with their conversation told CNN.

Perdue, who is fighting for his political career in a runoff in Georgia next week, met with Trump over the holiday break, according to sources familiar with the discussions. CNN reported earlier Monday that the President's signature on the sweeping legislation, which includes direct checks to Americans, came after days of quiet and careful nudging from not only Perdue, but also House Minority Leader Kevin McCarthy of California and Republican Sen. Lindsey Graham of South Carolina, who was seen golfing with Trump in Florida last week.

Perdue worked to be an invaluable voice in the President's ear, according to multiple aides, encouraging Trump to sign the bill, which the senator argued could bolster the GOP's Senate majority and would inevitably be celebrated as a win for Trump in his waning days in office. The source familiar with the call said Perdue and Trump are in regular contact and that Perdue specifically asked Trump to sign the bill into law.

Perdue and his fellow Georgia Republican Sen. Kelly Loeffler, both of whom are fighting to hold their seats in the state's January 5 runoff, had both voted, and lobbied, for the bill. Perdue had advertisements running the day after the bill's passage boasting that he had delivered Covid relief to Georgians.

Trump, however, complicated the GOP victory lap on the bill when he revealed a long list of problems he had with the legislation, including his desire to have the direct payments increased from $600 to $2,000.

Trump ultimately signed the legislation late Sunday night but said he still wants the payments increased to $2,000. While Perdue and Loeffler lauded Trump's "leadership" in signing the bill, they refused to weigh in on whether they support increasing the direct payments, something they will likely have to vote on after the House passed a measure on Monday increasing the amount to $2,000.

Senate Minority Leader Chuck Schumer, a New York Democrat, has said he plans to try to quickly pass the measure in the GOP-led chamber through requesting a unanimous consent agreement, which can be blocked by any senator who opposes it.

Loeffler has said she would be open to increasing the payments, if there were cuts to the package in other areas. Perdue has not weighed in at all, despite multiple inquires to his office.

His campaign and official office did not respond to CNN's request for comment on the phone call with Trump.

The runoffs in Georgia will determine which party controls the US Senate, making the campaigns of Perdue and Loeffler -- both of whom are Trump loyalists -- two of the most closely watched this cycle.