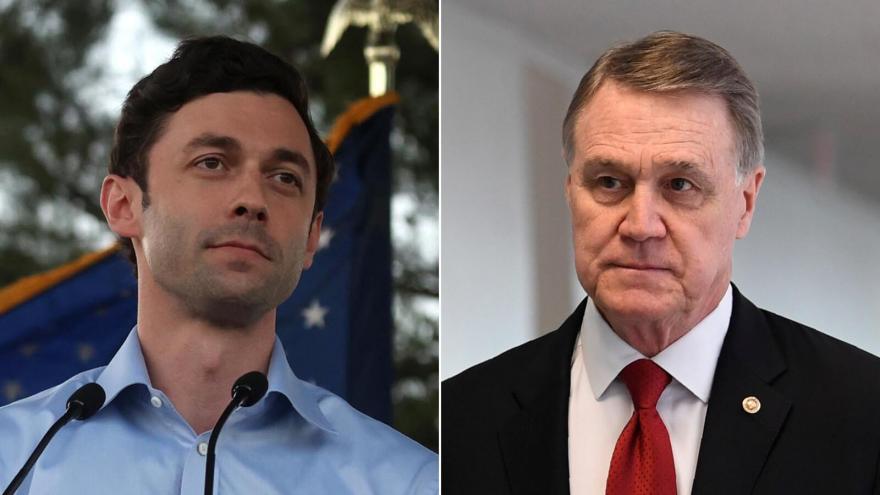 Georgia has started recruiting poll workers for the runoff election amid holiday and Covid-19 challenges.

(CNN) -- Evan Malbrough already spent the summer recruiting poll workers to staff in-person voting and count ballots in Georgia -- but now, with a heavily contested January 5 runoff that will determine control of the US Senate, he's back at it.

"We need to start raising a new generation of poll workers. Most poll workers are over 60, so as young people, we have to take up the reins and start taking responsibility for our democracy," said Malbrough, who founded the Georgia Youth Poll Worker Project after working in the state's June primary.

With a team of fellow Georgia State University students, Malbrough recruits people ages 16 to 25 online through Google forms and Instagram posts, as well as speaking to other organizations. He recruited about 1,000 students to work in the November general election and is currently asking counties how many they need for the runoffs.

"Without poll workers, we won't have enough precincts to serve the community that needs them and that's where we see the long lines and voter discrepancies," said Malbrough. "So we need to make sure we have adequately staffed elections, so we know we have a free and fair one."

It's an uphill battle. Election workers who are busy recounting the November presidential ballots are being run "into the ground" as state voting systems implementation manager Gabriel Sterling said in a recent press conference.

Some county officials say they are worried that, along with being burned out, potential poll workers will be put off by the surge in coronavirus cases and the timing of the runoff right after the holidays.

"It's harder to get people during the holiday season, so for our early voting workers, we're challenged to getting those because that's right through the holidays," said Janine Eveler, director of elections and registration in Cobb County, northwest of Atlanta.

A wave of youth activism is helping recruitment

Georgia Tech student Samuel Ellis decided to get involved in election work because of his experience going to vote for the first time in 2018, when he and two Black friends were met with older White workers at the polls.

He served this year as the poll manager for Georgia Tech's student-run polling precinct and led recruitment for the November general election.

"Most of the folks voting are students, and it's really important that when you go into a polling place, you feel heard and represented by the poll workers, and that they're folks you can trust," said Ellis. He'll still be on campus for the January runoff, and said it will be "something of a scramble to wrangle folks for Election Day."

The coronavirus pandemic gives younger people like Ellis, who are less at risk of serious complications, another reason to step up. To become a poll worker in Georgia, you must be a citizen of the United States, a resident of the county you would work in and be at least 16 years old.

"People say democracy is something worth dying for, and I agree, but not like this," Ellis said. "It is not worth dying, when there are able bodies of young people who can work the polls."

Universities in Georgia are also encouraging students to participate in voting initiatives and working the polls.

Counting on a last-minute push

The Secretary of State's office began a campaign to recruit poll workers in April and expects counties to be able to draw from a pool of 50,000 people.

"We had a big recruiting campaign with a number of other organizations, and we provided the counties with names of more than 50,000 people that were willing to serve as poll workers," said Walter Jones, communications representative of Georgia Secretary of State Brad Raffensperger's office.

Lisa McGlaun, elections assistant at the Athens-Clarke County Board of Elections, said the county had 500 people apply to work in the general election, and many of those who were hired have said they'll come back to work in the runoffs. "We were overrun with people who wanted to work the polls in November," McGlaun said. "We normally hire about 250 people. We had over 500 people apply."

Fulton County hired 3,000 poll workers to serve at the 255 polling locations during the November 3 general election, according to Regina Waller, Public Affairs Manager of Fulton County. She said there are no shortages or expected shortages for the runoffs at this time.

Officials in Gwinnett County, northeast of Atlanta, said it would be very unusual to be filled with workers by now ahead of the runoffs, and said they recruited right up to Election Day in November.

"Right up to the days before, we didn't have enough, but we ended up getting it," said communications director Joe Sorenson. "We typically recruit just in time, but I don't want anyone to think that we don't need poll workers because we'll be pushing hard between now and Election Day."