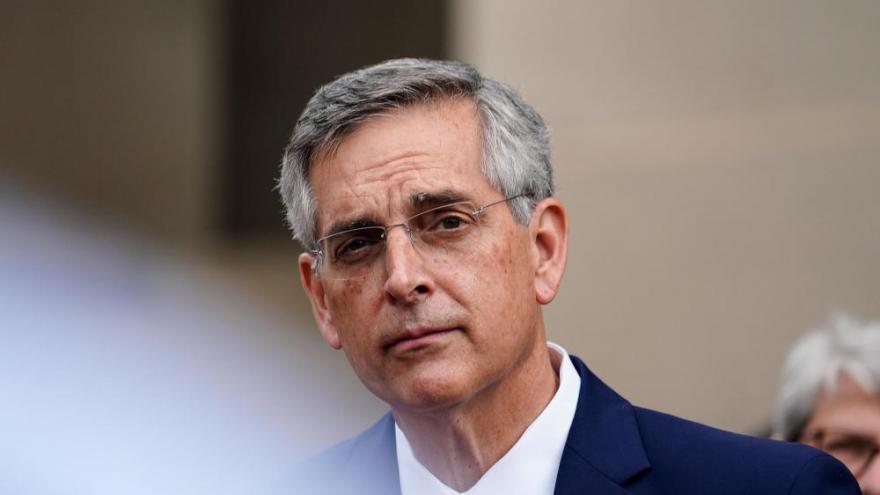 Georgia removes 100,000 names from the voter registration rolls. Pictured is Georgia Secretary of State Brad Raffensperger on November 11, 2020, in Atlanta.

(CNN) -- More than 100,000 names will be removed from Georgia's voter registration rolls in an attempt to keep the state's voter files "up to date," Georgia's secretary of state announced Friday.

"Making sure Georgia's voter rolls are up to date is key to ensuring the integrity of our elections," Republican Brad Raffensperger said in a statement. "There is no legitimate reason to keep ineligible voters on the rolls."

The voter files being removed are "obsolete and outdated," according to the statement, which says that since the 2020 election, Raffensperger has "made it a priority to continue with the list maintenance process."

Raffensperger -- who was censured at the Georgia GOP convention earlier this month -- has received harsh criticism from those in his own party for stating that Biden won Georgia in November and for refusing to help former President Donald Trump overturn the results of the election after his loss.

Raffensperger and his family have also received death threats since the election.

The effort to remove 101,789 names from Georgia's voter files marks the first time the state has conducted a "major cleaning" since 2019, but Georgia regularly removes the voter files of convicted felons and the dead on a monthly basis, according to the statement.

"The 101,789 obsolete voter files that will be removed include 67,286 voter files associated with a National Change of Address form submitted to the U.S. Postal Service; 34,227 voter files that had election mail returned to sender; and 276 that had no-contact with elections officials for at least five years," the statement said. "In each of these cases, the individual had no contact with Georgia's elections officials in any way - either directly or through the Department of Driver Services - for two general elections."

The full list of "obsolete and outdated" names that are being removed was published publicly with the statement.

In addition to the "obsolete and outdated" files, Georgia also removed "18,486 voter files of dead individuals based on information received from Georgia's Office of Vital Records and the Electronic Registration Information Center (ERIC), an interstate partnership of 30 states and the District of Columbia focused on maintaining accurate voter rolls," the statement says.

"That is why I fought and beat Stacey Abrams in court in 2019 to remove nearly 300,000 obsolete voter files before the November election, and will do so again this year," Raffensperger said.

Raffensperger has for years spoken out against Abrams. Following her loss to Georgia Gov. Brian Kemp, Abrams started Fair Fight Action, a voting rights organization that filed a lawsuit disputing, in part, Georgia's removal of voter files for those who haven't participated in recent elections, according to the Atlanta Journal-Constitution.

Georgia emerged as a major battleground state this past election and was home to two pivotal races that determined the balance of the US Senate.

In March, Georgia Republicans sped a broad elections bill through the legislature that Kemp signed into law against the objections of state Democrats and voting rights activists. The law imposes voter ID requirements for absentee ballots, reduces the number of ballot drop boxes in large counties and shortens the length of runoff elections, among other provisions.

Republicans defended the legislation as necessary to boosting confidence and security in elections, despite election officials saying the 2020 election was the most secure in American history. Trump had repeatedly promoted unproven theories about the 2020 election and Georgia's election system that took hold among his base of supporters.

While Georgia was the first state to enact new voting restrictions since the 2020 election, 13 other states have enacted nearly two dozen laws that restrict ballot access, according to a tally by the Brennan Center for Justice. And other Republican-led states are advancing measures that would restrict absentee and mail-in voting.

This story has been updated with additional details and context.