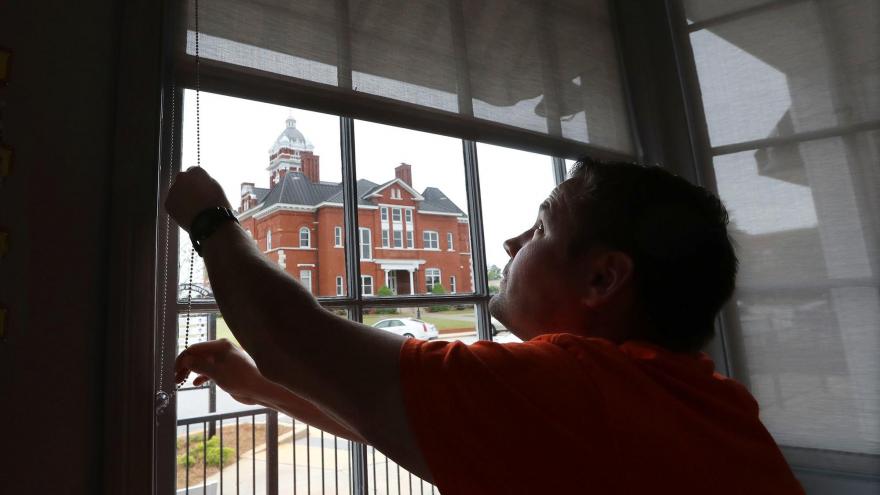 Brian Lambert, owner of a coffee and sweets shop in Forsyth, Georgia, opens the windows of his business as he gets ready to reopen next week.

(CNN) -- Hair stylists at Salon Gloss in Woodstock, Georgia, wore masks and gloves on Friday, maintaining distance by using every other work station and keeping a supply of hand sanitizer nearby. Their customers also donned masks and gloves, while another employee disinfected a countertop.

Similar scenes played out across the state Friday, the first day Republican Gov. Brian Kemp allowed gyms, barber shops, hair salons, tattoo parlors and bowling alleys to reopen their doors, just a few weeks after he issued a stay-at-home order to slow the spread of the coronavirus.

But other businesses remained closed, like Sabrina Watkins' salon in College Park, an Atlanta suburb. She won't return to work until she feels safe, she said, even though customers called asking if they could get their hair done Friday.

"I said, 'No, absolutely not. Get your hair done for what?'" Watkins said. "There's a pandemic, people are dying. As much as I love the business, now is not the time, regardless of who says it is."

Kemp and state officials moved ahead Friday with the plans to reopen some businesses, undeterred by a barrage of criticism. Now, the state, along with several others, is trying to safely navigate relaxing restrictions while keeping residents safe.

The governor's decision pits him against mayors from cities such as Atlanta, Augusta and Savannah, as well as advice rooted in a data model often cited by the White House.

Georgia should not even begin to reopen until June 22, according to the model by the Institute for Health Metrics and Evaluation at the University of Washington, which assumes states will implement aggressive testing, contact tracing, isolation and crowd-size limits to prevent more infections.

Bottoms has called Kemp's decision perplexing for a state battling a virus that has killed nearly 900 residents and sickened about 22,000 others. Nationwide, the death toll has surpassed 50,000, according to the Johns Hopkins University.

"I've done the best that I can using my voice as mayor to just say to people to use your common sense," she said.

Bottoms said Friday morning that she expects some people will not heed pleas for social distancing.

"They will go into hair salons and go and get manicures and pedicures as if it's business as usual," Bottoms told CNN's John Berman. "And then what I expect is that in a couple of weeks we will see our numbers continue to rise in this state."

Bottoms said her chief concern is that reopening businesses is going to compound the already existing problem of coronavirus cases in the state, especially "in the African American community where there is a beauty and barbershop on every corner."

"By opening hair salons and barbershops, these nail salons and these nonessential businesses, we know that African Americans are dying at much higher rates and when you have people flocking into barbershops and hair salons, it's not only a risk for the people who work in those salons, it's a risk for a community as a whole that concerns me greatly," Bottoms said.

Georgia isn't alone. Other states have started easing restrictions, including Oklahoma, which allowed businesses like salons, spas and pet groomers to reopen for appointments beginning Friday.

Those small business owners who have opened are struggling to figure out how best to protect themselves, their employees and their customers from the coronavirus.

Businesses that reopen must follow social distancing guidelines, maintain sanitation and screen their employees for symptoms such as fever and respiratory illness, Kemp said. Theaters and dine-in restaurants will be allowed to reopen Monday -- even with a statewide shelter-in-place order that expires at the end of the month.

Tim Timmons, owner of Salon Gloss, told CNN Friday his shop is booked for the next three weeks. His employees have been suffering since the social distancing and stay-at-home guidelines went into effect.

"They've been out of work, they're not getting assistance, no unemployment, no stimulus money for the business," Timmons said. "These are real people with real problems and they have to put food on their table."

When customers arrived to Salon Gloss Friday, Timmons said they had their temperatures taken and they were asked about whether they've had contact with anyone who's had the coronavirus or if they've traveled to heavily impacted places.

During shampoos, their faces were covered by a towel, he said. After checking out, customers are asked to discard their masks and gloves in a trash bin outside the salon.

Employees stood 14 feet apart, Timmons said, adding that his business is not running on full staff, but is instead running on split shifts so they can social distance.

But it will be hard for some businesses to maintain appropriate distance. Savannah Stafford is opening her salon in Savannah, but she conceded maintaining 6 feet of distance is not possible between a hair stylist and a client.

"You can kind of distance between the next two people throughout the salon," Stafford said Friday, "but it's going to be difficult because we're so hands on."

Before the outbreak, Watkins saw about 10 clients daily at the work space she shares with five stylists -- an arrangement she said raises the risk of exposure. Some of her clients are elderly and more vulnerable to infections.

"None of us are being tested; how do we track who's carrying it, who is giving it to whom? I don't want to take part in spreading the disease and risking their lives," she said. "Staying home gives us a greater chance until the numbers go down as far as infections and the death toll."

Eric Greeson opened his barbershop in Douglasville, 20 miles west of Atlanta, but said he was initially "kind of shocked" when he heard the governor's announcement earlier this week. Still, he felt he had no option but to open.

"We would feel more comfortable if he had the backing of health officials and the President," Greeson said of Kemp. "But we know so far there's not been one health official that's, you know, agreed with him."

The head of the Georgia State Board of Cosmetology and Barbers, Kay Kendrick, has applauded the governor's move, pointing out that most of the 95,000 licensees under the board are independent contractors who don't have another source of income.

One of the owners of Southern Lanes Bowling Alley in Douglasville told CNN he was happy to open but also sensitive to the public's concerns.

"We're not trying to hurt anybody," Randy Hicks said. "Look, we just want to get a business going. We have 25 employees that support families out of this bowling center, so we're trying to get them back to work also."

Another owner, Deborah Holland, said she was a lung cancer survivor and aware of cleanliness. "I don't want to have to go to the hospital with this virus or anything. I'm missing half a lung."

Customers were asked to clean their hands and have their temperatures checked before entering. The alley normally sanitizes the bowling balls and rental shoes, but Holland said they're requiring customers to place the borrowed bowling balls in one area to be sanitized before being used by someone else.

Dustin Schmidt, owner of Electric Ink Tattoo in Woodstock, decided to open because he needed to pay his bills, he said.

To keep customers safe, only one person is allowed inside at a time and tattoo artists will wear masks, Schmidt said. They're also cleaning the shop, he said, but that's something they do anyway.

Still, only one of his tattoo artists returned to work. The others, he said, are scared.

Nikolas Long, the employee who returned, said he was a little nervous to be back at work. "But I'm excited to make some money. I've been broke about a month-and-a-half."

Other businesses decided not to open on Friday, though, including Christopher Escobar who owns Plaza Theatre, an independent, 500-seat movie theater in Atlanta.

"It comes down to a difference between what you can do and what you should do," he said, adding he was looking out for the safety for staff and customers. "It just doesn't make sense at this time. We're looking for clear indications and signals from our mayor as well as public health officials."

Escobar's business is looking for other ways to operate though. He told CNN Friday his theater planned on doing a drive-in outside where they can operate in a completely no-contact manner.

"We're getting creative and working with property owners here and a number of different partners," he said.

Some customers were glad to see businesses reopening, including Leon Perpignan, who was in line at the bowling alley in Douglasville 10 minutes before it opened at noon. Typically, he bowls four times a week, he said. About a dozen bowlers were there shortly after opening.

If people are worried they should stay home, Perpignan said, adding, "No one's forcing you to come out."

Jerry Robinson showed up Friday at Salon Gloss. He's a regular customer and normally visits every three weeks. But Friday, it had been two months since his last haircut.

"No fear for me," he said, asked if he had any concerns. "We have to live and take risk. Life is a little bit of a risk."

In Martinez, Georgia, gym owner Greg Smith said he wanted to reopen for his customers who are worried about heart disease, high cholesterol and high blood pressure. To keep customers safe, the gym is spacing its equipment 10 feet apart and checking temperatures as clients arrive.

"We believe what we're offering today and getting our clients started back is going to be as safe as possible," Smith said.

Meantime, some national gym chains have indicated they will not reopen, even with a green light from the governor.

In an email to members, LA Fitness said it would not reopen "while we seek a greater consensus between the federal, state and local authorities on the proper path forward."

Until then, the company is working to space equipment according to social distancing guidelines and reducing capacity by about 30%, the email said, in addition to new cleaning protocols.

SoulCycle studios in Georgia also was staying closed Friday, according to Harvey Spevak, the executive chairman of Equinox Group, which owns chains like SoulCycle and Pure Yoga in addition to its health clubs.

The company's reopening plans will vary by state and local area, Spevak told CNN, based on guidance from officials. The company is implementing precautions like new cleaning technology and consulting infectious disease experts on its plans to reopen.

Health experts have criticized the move, saying it's too soon and risks setting off another wave of infections. President Donald Trump at first applauded Kemp for his aggressive plan to restart the economy, a source told CNN, then publicly bashed him during news briefings.

"I told the governor of Georgia, Brian Kemp, that I disagree strongly with his decision to open certain facilities," Trump said. "But, at the same time, he must do what he thinks is right."

When asked for his response to Trump's criticisms, Kemp told reporters Friday he thought Trump has been doing a great job with the coronavirus response.

"We've been working with him the whole time. We've laid our plan out to meet the phase one criteria. I think it's the right move at the right time, and I appreciate all they're doing for us," Kemp said.

Several other states have taken steps toward easing restrictions. Besides Oklahoma, where personal care businesses were allowed to open for appointments Friday, retail stores in Texas were able to use delivery and curbside service beginning Friday.

Alaska will also allow salons and restaurants to open in many areas, though restaurants must keep distance between tables and can't exceed 25% of their normal capacity.

In South Carolina, GOP Gov. Henry McMaster announced some stores could reopen at 20% capacity along with beaches.

That state shouldn't reopen until June 8 at the soonest, the health institute's modeling indicates.