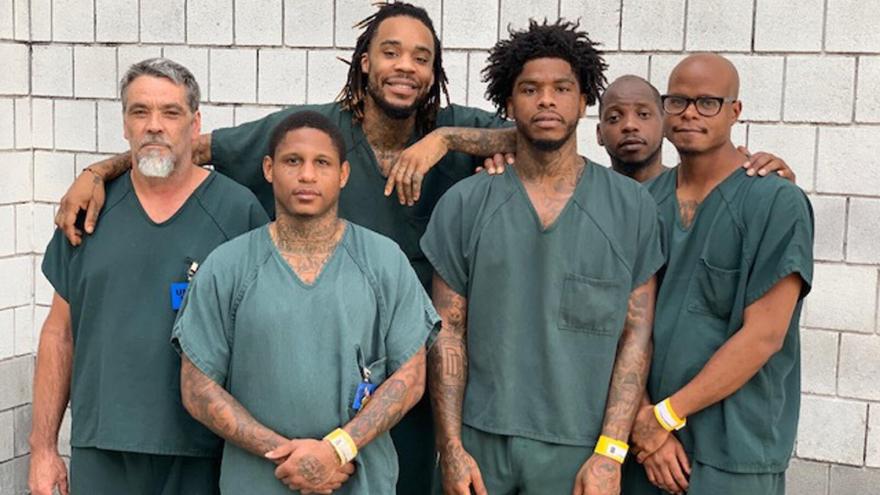 (CNN) -- A group of men incarcerated at a jail in Georgia are being credited with saving the life of a sheriff's deputy.

Gwinnett County Sheriff's Deputy Patrick Edmond was conducting a routine cell search in a housing unit at the county jail on August 16 when some of the jailed men noticed something was wrong.

"I could see in his eyes that he was starring off in space and he just wasn't right," John Queen told CNN affiliate WGCL.

Edmond had been repeating the same phrase and had dropped a blanket he had been holding, Deputy Shannon Volkodav said the men told her. Video showed him staggering and at one point, leaning over a table for support.

It turned out that Edmond was experiencing a life-threatening stroke. And were it not for the actions of six incarcerated men who alerted staff to the medical emergency, the outcome could have been much worse, Volkodav told CNN.

"No one would have known about it so quickly if it weren't for the efforts of these inmates who intervened and made sure they got help to Deputy Edmond quickly," she said.

One man pulled up a chair for the deputy, while others helped ease him into it, Volkodav said. Another went over to the housing unit's phone to call for help, while two others used the deputy's radio. Others started banging on the walls to get the attention of a deputy in the neighboring unit.

Edmond underwent surgery after passing a blood clot in his brain and is now recovering at home, she added.

The men now get to watch movies and eat pizza

This is the second time in recent weeks that the heroic actions of inmates in Gwinnett County have made headlines.

Last month, three men in the county jail noticed that a deputy appeared "to be feeling poorly" while carrying out his security procedures in the housing unit. As the officer lost consciousness and hit his head on the floor, the men began pounding on the doors for help and rushed to administer aid.

Volkodav said this latest incident is evidence of the relationship Edmond has with the incarcerated people he supervises, adding that "they speak very highly of him."

"He encourages them to make better choices in their lives," she said. "They know he cares about them."

Jattir Moton, one of the men who came to Edmond's aid, echoed that sentiment.

Volkodav said the men in the housing unit were given movies on DVD and allowed to watch them for a week. They were also given a special meal last week, and will get pizza on Friday, she said.