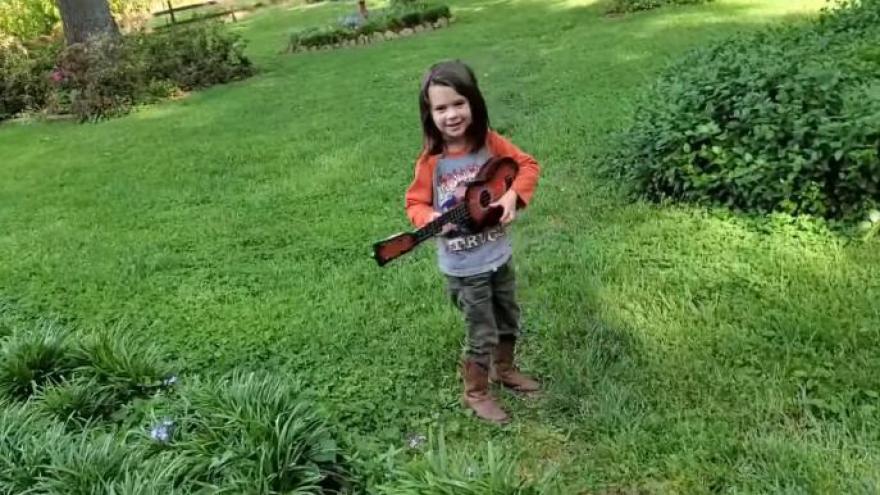 A family in Georgia is mourning after 5-year-old Wyatt Gibson, described as someone who had "nothing but pure love," died just days after being diagnosed with Covid-19.

(CNN) -- A family in Georgia is mourning after a 5-year-old boy -- described as someone who had "nothing but pure love" -- died just days after being diagnosed with Covid-19.

Wyatt Gibson suffered a stroke and died on July 16 in a Chattanooga, Tennessee, hospital where he'd been intubated because he was having trouble breathing and his oxygen levels were low, his godmother Amanda Summey told CNN.

He was a healthy child, and his parents thought he had just had mild food poisoning or a stomach bug when first got sick, according to a statement written by the family.

The family said they noticed that Wyatt's tongue was white on July 12, and rushed him to their local emergency room where he was diagnosed with strep, staph and Covid-19.

"There are no words," Wyatt's mom Alexis Gibson wrote on Facebook. "Wyatt was nothing but pure love and the perfect overload of happiness. We see you everywhere we look Bitty Wy and I still feel you holding my hand."

The post included a video of Wyatt spinning around outside in a big pair of cowboy boots, strumming his guitar and singing a made-up song about things he loved.

"I have lost my best friend," Wes Gibson, Wyatt's dad, wrote on Facebook

"We loved having fun and going on adventures together. He loved his momma and his sister so very much, and he was always looking for ways to help," he wrote, adding that Wyatt liked to wave at people in grocery stores because he knew it would make their day.

Wyatt's dad and 8-month-old sister, Alyssa, also tested positive for Covid-19, along with his maternal grandmother, who was at the house, according to Summey.

Summey said she took care of Alyssa on Friday, and is now in quarantine. She's tested negative for Covid-19 and has no symptoms.

Wyatt was too young to get the shot, which is only approved for children over the age of 12.

Summey said she doesn't know if other members of the Gibson family were vaccinated.

Only about 38% of Georgia residents are fully vaccinated, according to data from the US Centers for Disease Control and Prevention (CDC).

Deaths and hospitalizations of children remain rare -- the Georgia Department of Public Health reports 11 deaths of children under 18.

The number of pediatric Covid-19 cases is climbing, which has health officials concerned as kids around the United States prepare to go back to school in the next few weeks.

The American Academy of Pediatrics said that 23,500 child cases were reported between July 8 and 15, representing 15.9% of the week's reported cases.

Wyatt's family is in quarantine as they struggle to make sense of their loss, Summey said.

"I wasn't supposed to be able to have children, so Wyatt, he was my boy before I could have a boy," Summey said. "That's why I'm the godmomma."

She described Wyatt as her 3-year-old son's best friend, and "the most loving, joyous kid," who thought everything was fun.

He'd even respond with an excited "Yay!" when it was time to go grocery shopping, Summey said.

"He was so helpful and just the best big brother," she said. "He wanted to do whatever he could to help."