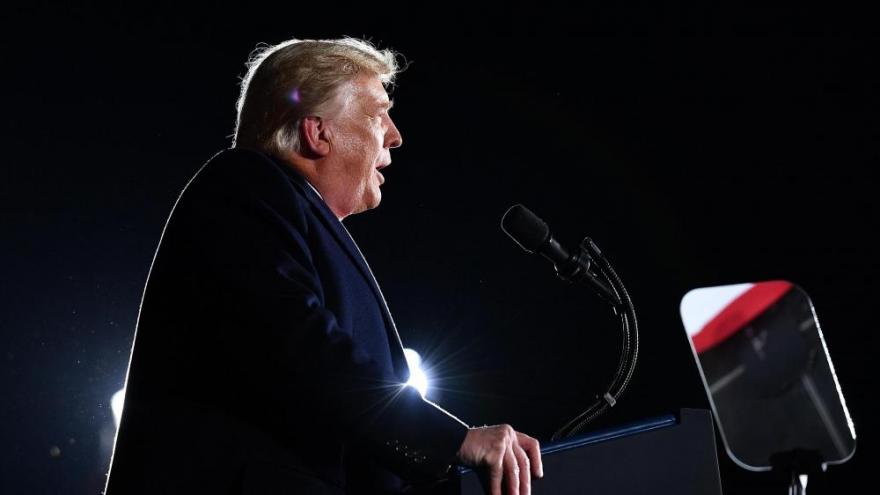 (CNN) -- As Donald Trump returns to Georgia later this month, criminal investigators in the state have been quietly conducting interviews, collecting documents and working to build a line of communication with congressional investigators as they aim to build a case against the former President for his alleged attempts to overturn the state's 2020 election results.

Fulton County District Attorney Fani Willis kicked off her investigation with a splash earlier this year, when she fired off a round of letters to Georgia officials asking them to preserve documents related to Trump just a month after she took office.

Since then, her investigation into Trump's efforts to upend Georgia's 2020 presidential election results has been more discreet as she juggles the early stages of the Trump probe with an avalanche of backlogged cases and rising violence in the Atlanta area.

"What I can tell you is that the Trump investigation is ongoing. As a district attorney, I do not have the right to look the other way on any crime that may have happened in my jurisdiction," Willis told reporters this week. "We have a team of lawyers that is dedicated to that, but my No. 1 priority is to make sure that we keep violent offenders off the street."

Investigators are plowing ahead as Trump continues to weigh his political future and wade into Peach State politics with a Georgia rally set for late September.

Trump -- still burned by his 2020 defeat and feeling betrayed by local officials who refused to help him overturn the 2020 election results -- has rolled out a number of endorsements in Georgia.

Among them: Rep. Jody Hice, who is trying to unseat Secretary of State Brad Raffensperger, and state Sen. Burt Jones, who is running for the open lieutenant governor seat. Both Raffensperger and outgoing Lt. Gov. Geoff Duncan stood up to Trump's attempts to overturn the election. Both of Trump's picks to replace them are Republicans who have embraced Trump's false claims of election fraud.

While the Fulton County investigation still appears to be in its early stages, investigators so far have obtained documents from the Georgia Secretary of State's office and interviewed a handful of its staff, spoken to other Georgia election officials about how elections are conducted and initiated conversations with congressional committees that could obtain information relevant to the Georgia probe, according to people familiar with the investigation.

If Willis is able to gain access to information from congressional committees, it could provide a mountain of documents relevant to her investigation and possibly help her avoid lengthy court fights if she were to seek similar information on her own.

Willis's probe spans not only the former President's activities, but also a call between Sen. Lindsey Graham and Raffensperger, Rudy Giuliani's false allegations of election fraud before Georgia legislators and the surprise departure of Byung "BJay" Pak from his role as US attorney for the Northern District of Georgia.

A key area of focus has been the Georgia Secretary of State's office, after Trump called officials there following the 2020 election and pressed them to help to investigate his allegations of fraud in the hopes of overturning results showing Joe Biden won the state in November.

In one call, Trump pressed Raffensperger to "find" the more than 11,000 votes needed for Trump to win the state. In another call, Trump urged a top investigator in the Secretary of State's office to uncover fraud in Fulton County, telling her, "When the right answer comes out, you'll be praised."

Audio recordings of both of those calls have already emerged, and Willis's office has been poring over those along with other documents and records from the Secretary of State's office, according to people familiar with the matter.

In an indication that the investigation remains in its early stages, investigators have not yet spoken with a handful of high-profile officials in Georgia -- including Raffensperger, Duncan and Georgia Gov. Brian Kemp -- who received document preservation requests back in February, according to sources familiar with the matter.

Those requests, which were the first indication Willis was investigating Trump, asked officials to retain records relevant to the administration of the 2020 general election as well as any attempts to influence officials who carried out the election.

The letters said Willis was investigating potential crimes, including "solicitation of election fraud, the making of false statements to state and local governmental bodies, conspiracy, racketeering, violation of oath of office and any involvement in violence or threats related to the election's administration."

The Georgia officials have not been accused of wrongdoing and the letters noted that they were not expected to be targets of the investigation.

In the meantime, investigators have spoken to local election officials as they build the groundwork for a potential case against Trump.

Fulton County Elections Director Richard Barron said he was among the election officials who spoke to investigators from the district attorney's office. He provided them with phone messages and emails documenting the threats his office received surrounding the election, but he said their primary interest was in election procedures.

"That was specifically about how an election runs to help them with their investigation," so they can build a case to potentially present before a grand jury, Barron told CNN.

As congressional investigators dig into to the January 6 insurrection at the US Capitol and the events leading up to that day, they are poised to potentially uncover a trove of information that could prove pertinent to Willis's investigation.

"Clearly, any information she gets could be and would be helpful," said Michael J. Moore, a former US attorney for the Middle District of Georgia. "I can't imagine that she would want this case to be languishing in an investigative state for a long period of time, so she may be hoping that she gets some backup from the congressional committees."

The select committee investigating January 6 has already asked the National Archives for a range of documents, including any records of White House communications with Georgia officials such as Raffensperger, Kemp and Frances Watson, the Secretary of State investigator whom Trump phoned, from Election Day through January 20, 2021. The document request also covers communications with Trump's former chief of staff Mark Meadows, Giuliani and other attorneys who participated in Trump's call to Raffensperger.

The committee has also asked the Justice Department for communications involving Pak -- who has already testified to a congressional panel that he resigned because he heard Trump was thinking of firing him -- and Bobby Christine, the prosecutor Trump tapped to replace Pak.

Asked whether she hopes to strike a formal cooperation with congressional committees investigating the insurrection, Willis's face broke into a smile. "Oh, I hope so," she told reporters Wednesday. "It is certainly information that my office needs to see."

Those conversations still appear to be in the early stages, as another source familiar with the matter said there has been no active coordination so far between Fulton County investigators and the select committee investigating January 6.

The Trump investigation in Georgia has proceeded at a measured pace, in part because Willis, who took office in January, is trying to pull off a balancing act between investigating a former president and addressing local issues in Fulton County.

"I know there's pressure on her to get that moving," Joshua Morrison, an attorney who previously worked for Willis in the district attorney's office before she took over the top job, said of the Trump investigation. "But she's not the type of person to slow down an investigation or speed it up just for political expediency."

In the meantime, Willis's probe has effectively superseded a separate investigation the Georgia Secretary of State's office was conducting into Trump's two calls to officials in that office, Raffensperger and Watson. A person familiar with that investigation said it has been deferred while Willis's investigation is still active.

Dominating Willis's schedule has been a double whammy of backlogged cases and rising violent crime.

She has said her office faced a logjam of some 11,000 cases, partly because of court closures during the Covid-19 pandemic, but also from office mismanagement Willis blames on her predecessor. She has also had to grapple with a surge in shootings and homicides in the Atlanta region, including high-profile cases like the metro Atlanta spa shooter, in which Willis intends to seek the death penalty.

"I'm here begging you for help," Willis told the Fulton County Board of Commissioners this week. "I'm drowning. I need help."

It was her second appearance before the board in recent months to request additional funds and personnel.

"They're overwhelmed," Morrison said. "Like she told the county commission a few weeks ago, it's manpower and money that are necessary to fight crime and also handle Trump."

Willis has already brought on a handful of experts whose experience could prove useful to her Trump investigation, but a person familiar with the matter said they were still in the process of "gearing up" and adding staff to help with that investigation.

Moore, the former US attorney, said it will continue to be a tricky balancing act for Willis to serve her constituents while investigating Trump.

"I can't imagine that a local DA with the amount of sort of home issues that she faces on a daily basis wants to get bogged down in this case," Moore said. "At the end of the day, I mean her duties are of course to prosecute crimes, they're not necessarily to embed yourself in the history books."

For Willis's part, she has insisted she'll treat the Trump investigation like any other -- parsing the facts against the law to see what, if any, charges they yield.

"I know that people find that case to be interesting because it was a former sitting president. And that has some historic value. For me, it's not interesting," Willis told WABE, the Atlanta-area NPR radio station, last week. "We will put the facts that are learned -- literally, cause I'm old school -- up on a wall, what those facts are. We will put the statutes that we believe those facts could or could not touch. We will see if the elements of a crime are met. If they are, I will present a case to the grand jury. If they're not, then we won't do it."