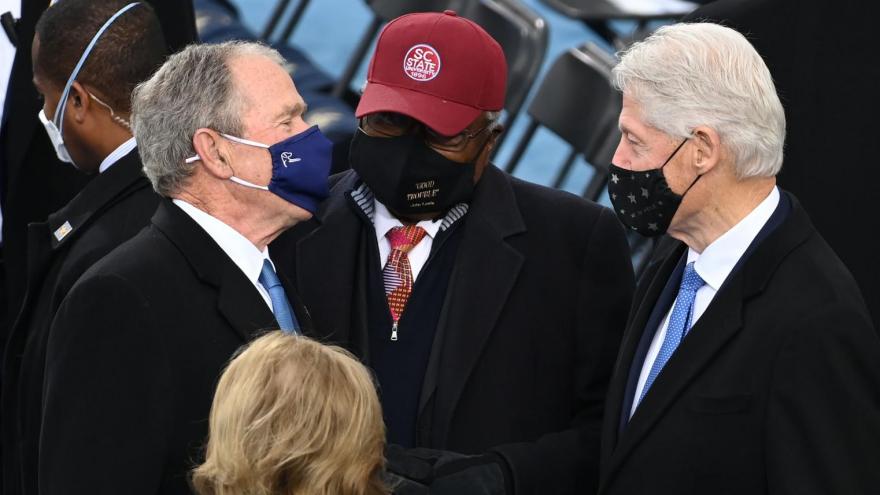 George W. Bush plans to praise Liz Cheney during a Saturday call with his former vice president, her father, Dick Cheney. This image shows George W Bush, Bill Clinton ad Jim Clyburn on the West Front of the US Capitol in Washington, D.C. on January 20, 2021.

(CNN) -- Former President George W. Bush is making it clear that he supports Rep. Liz Cheney of Wyoming, the No. 3 Republican in the House, who voted to impeach then-President Donald Trump.

Bush's chief of staff, Freddy Ford, told CNN on Friday that Bush plans to praise Liz Cheney during a Saturday call with his former vice president, her father, Dick Cheney.

When asked if Bush is planning to support Cheney if she faces a tough primary next year, Ford said, "You're a few months ahead of us -- we aren't thinking about the next election cycle yet. But I do know that President Bush is planning to call VP Cheney tomorrow for two reasons: to wish him a happy 80th birthday, and to thank him for his daughter's service."

The show of encouragement comes as the younger Cheney has faced intra-party criticism for joining nine other House Republicans and all House Democrats in voting to impeach Trump earlier this month for "incitement of insurrection" in light of his role in encouraging the January 6 riot at the US Capitol. While House Minority Leader Kevin McCarthy, a California Republican, was opposed to impeachment, House GOP leaders did not lobby their members to oppose it, and Cheney told the conference it was a "vote of conscience."

The backlash has been swift. Cheney is facing a primary challenge from a prominent conservative state legislator, and Republican Rep. Matt Gaetz of Florida railed against her in remarks at the Wyoming state Capitol on Thursday that stirred hundreds of Trump supporters and counter-protesters. She has been heavily criticized by several House Republicans calling for her to step down from her leadership position over her vote, though there have yet to be similar calls from other members of House Republican leadership for the Wyoming Republican to step down from her leadership post.

CNN reported Friday that Trump is focusing his political energy on targeting Cheney, a push that comes as McCarthy is working to shore up his relationship with the ex-President, including meeting with Trump at his Palm Beach resort, Mar-a-Lago, on Thursday.

According to one source, Trump has repeatedly questioned his Republican allies about efforts to remove Cheney from her leadership position and to run a primary candidate against her. He has been showing those allies a poll commissioned by his Save America PAC that purports to show that Cheney's impeachment vote has damaged her standing in Wyoming, even urging them to talk about the poll on television.

The risk of voting against the former President has not been lost on Republicans who did so.

"I did it knowing full well it could very well be terminal to my career," Rep. Adam Kinzinger, an Illinois Republican who also voted to impeach Trump, told CNN of his vote. "But I also knew that I couldn't live with myself having, you know, try to just protect it and just felt like the one time I was called to do a really tough duty, I didn't do it."

Saturday's planned call to the senior Cheney isn't the first time Bush has opposed Trump. Bush derided the rioters who stormed the Capitol, saying that "this is how election results are disputed in a banana republic -- not our democratic republic."

"I am appalled by the reckless behavior of some political leaders since the election and by the lack of respect shown today for our institutions, our traditions, and our law enforcement," he added. "The violent assault on the Capitol -- and disruption of a Constitutionally-mandated meeting of Congress -- was undertaken by people whose passions have been inflamed by falsehoods and false hopes."

Bush had congratulated President-elect Joe Biden in a phone call following the election and said that while Trump had the right to pursue legal challenges and recounts, the 2020 race was "fundamentally fair" and "its outcome is clear." He also attended Biden's inauguration when Trump did not, skipping town early before the traditional meeting between the outgoing and incoming leaders.

"Though we have political differences, I know Joe Biden to be a good man, who has won his opportunity to lead and unify our country," Bush said in a subsequent statement. "The President-elect reiterated that while he ran as a Democrat, he will govern for all Americans. I offered him the same thing I offered Presidents Trump and Obama: my prayers for his success, and my pledge to help in any way I can."