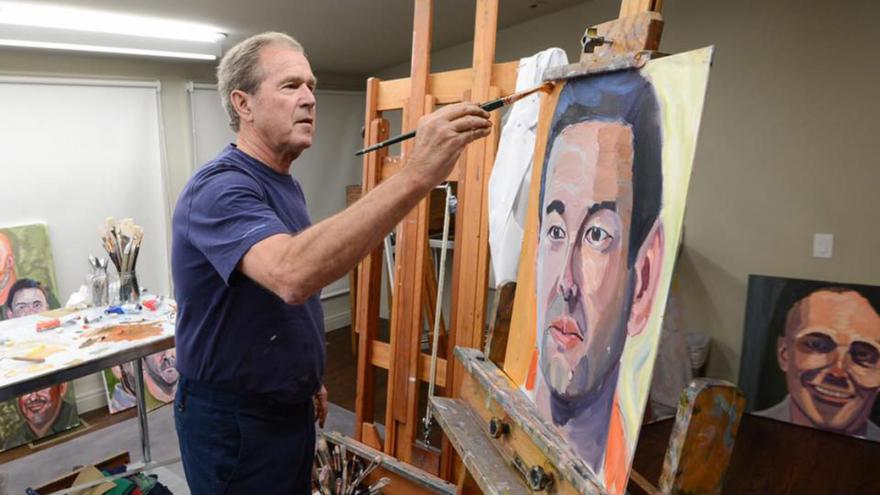 Former President George W. Bush will release a book of 43 portraits of immigrants in conjunction with an exhibition on the value of American immigration at the George W. Bush Presidential Center that will feature the paintings.

(CNN) -- Former President George W. Bush will release a book of 43 portraits of immigrants in conjunction with an exhibition on the value of American immigration at the George W. Bush Presidential Center that will feature the paintings.

The book from Bush, a prolific amateur painter, will be titled "Out of Many, One" and will publish in March, according to a statement from the book's publisher, Crown.

"Through powerful four-color portraits—personally painted by the President himself—and their accompanying stories, OUT OF MANY, ONE reminds us of the countless ways in which America has been strengthened by the individuals who have come here in search of a better life," the statement continued.

In the book's introduction, Bush expressed hope that his book would help present immigration as a unifying, uplifting issue.

"While I recognize that immigration can be an emotional issue, I reject the premise that it is a partisan issue. It is perhaps the most American of issues, and it should be one that unites us," he wrote, adding that "my hope is that this book will help focus our collective attention on the positive impacts that immigrants are making on our country."

Bush has criticized the state of modern immigration discourse. In 2018, on the day after the Trump administration issued guidance for asylum seekers at the border that threatened thousands of individuals with being turned away before they could plead their cases in court, Bush said he was "disturbed" by the immigration debate taking place in the United States. Bush has also praised the nation's immigrant history as "a blessing" while calling for comprehensive reform.

The upcoming book will mark a new chapter in Bush's artistic career. In October, the Kennedy Center in Washington, DC, hosted an exhibit titled "Portraits of Courage" featuring paintings by Bush of men and women who served in the US armed forces in the years following the September, 11, 2001, terrorist attacks. Bush also painted a portrait of former House Speaker John Boehner as a gift for his retirement from Congress.

After leaving office in 2009, Bush began to paint, but he kept his new hobby a secret. Inspired by British Prime Minister Winston Churchill, who painted extensively, Bush told friends and family that he found painting relaxing and that he hoped it would inspire others to try new things. Along the way, he hired an art teacher to help him with technique and, notably, told her he wanted to discover his "inner Rembrandt."

Bush's paintings became public after his sister Dorothy Bush Koch's email account was hacked in 2013 and several images were posted by a hacker known as "Guccifer." Following the hack, Bush has grown increasingly comfortable with making his paintings available for public consumption.

Many of his portraits have been displayed at his presidential library in Dallas, including paintings of major world figures like Russian President Vladimir Putin, the Dalai Lama and his father, former President George H.W. Bush. His website also features a painting he did of his dog, Barney.