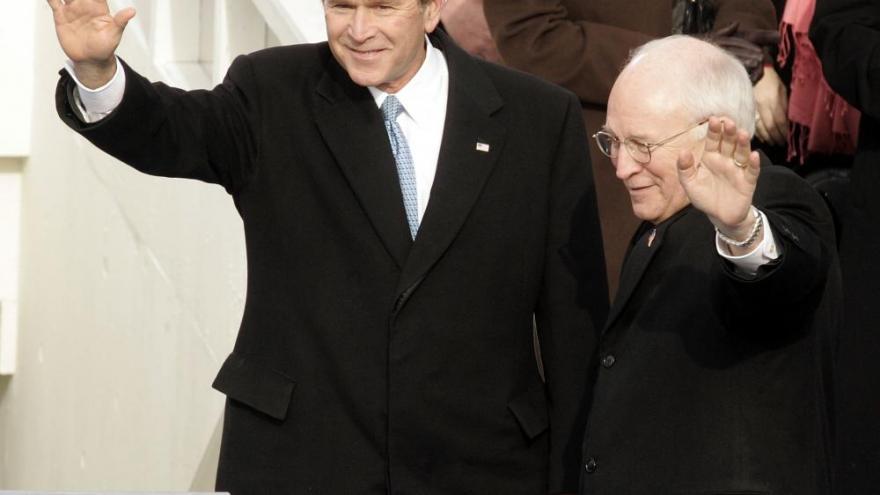 Republican former President George W. Bush, seen here in 2005, derided the rioters who forced a shutdown of the House and Senate chambers of the US Capitol on Jan. 6, calling the scene "sickening and heartbreaking" in a pointed statement.

(CNN) -- All four living former presidents -- Barack Obama, George W. Bush, Bill Clinton and Jimmy Carter -- derided the rioters who forced an evacuation of the House and Senate chambers of the US Capitol in strongly worded statements that stressed the need for a peaceful transfer of power.

"History will rightly remember today's violence at the Capitol, incited by a sitting president who has continued to baselessly lie about the outcome of a lawful election, as a moment of great dishonor and shame for our nation. But we'd be kidding ourselves if we treated it as a total surprise," Obama said of his successor and the chaos that engulfed the nation's capital Wednesday.

Supporters, spurred by President Donald Trump, breached the Capitol complex on Wednesday and threw into question when Congress would resume counting Electoral College votes and declare President-elect Joe Biden the winner of the election.

"Right now, Republican leaders have a choice made clear in the desecrated chambers of democracy," Obama, a Democrat, said. "They can continue down this road and keep stoking the raging fires. Or they can choose reality and take the first steps toward extinguishing the flames. They can choose America."

Bush, the last previous Republican president, said that "this is how election results are disputed in a banana republic -- not our democratic republic."

"I am appalled by the reckless behavior of some political leaders since the election and by the lack of respect shown today for our institutions, our traditions, and our law enforcement. The violent assault on the Capitol -- and disruption of a Constitutionally-mandated meeting of Congress -- was undertaken by people whose passions have been inflamed by falsehoods and false hopes," he added.

Clinton, a Democrat, echoed that message later Wednesday, calling the scene "an unprecedented assault on our Capitol, our Constitution, and our country."

"The assault was fueled by more than four years of poison politics spreading deliberate misinformation, sowing distrust in our system, and pitting Americans against one another. The match was lit by Donald Trump and his most ardent enablers, including many in Congress, to overturn the results of an election he lost," Clinton charged.

"The election was free, the count was fair, the result is final. We must complete the peaceful transfer of power our Constitution mandates."

Carter, also a Democrat, said he and former first lady Rosalynn Carter were "troubled" by the day's events.

"This is a national tragedy and is not who we are as a nation," he said. "Having observed elections in troubled democracies worldwide, I know that we the people can unite to walk back from this precipice to peacefully uphold the laws of our nation, and we must. We join our fellow citizens in praying for a peaceful resolution so our nation can heal and complete the transfer of power as we have for more than two centuries."

Only after pleading from aides and congressional allies inside the besieged Capitol did Trump release a video urging the rioters to "go home," while still fanning their misplaced grievances about a stolen election.

In the video, he also praised the crowd, who broke into the Capitol using force, stole items from its rooms and posed for photographs in the legislative chambers. "We love you," Trump said. "You're very special."

Bush, meanwhile, warned in his statement that "insurrection could do grave damage to our Nation and reputation" and pleaded for people to "let the officials elected by the people fulfill their duties and represent our voices in peace and safety."

While Clinton has been a vocal critic of Trump throughout his time in office and Obama stumped for Biden on the campaign trail, Bush has largely stayed out of politics since leaving office in January 2009.

Still, he was quick to congratulate Biden in November, both in a phone call and in a statement that said while Trump has the right to pursue legal challenges and recounts, the race was "fundamentally fair" and "its outcome is clear."

"Though we have political differences, I know Joe Biden to be a good man, who has won his opportunity to lead and unify our country," Bush had said. "The President-elect reiterated that while he ran as a Democrat, he will govern for all Americans. I offered him the same thing I offered Presidents Trump and Obama: my prayers for his success, and my pledge to help in any way I can."

Bush has also periodically offered thinly veiled shots at Trump during his time in office. Last month, Bush sent holiday cards with a pointed message about a hopeful new year as Trump continued to deny his election loss.

Obama praised those in the Republican Party who have already condemned the violent events that unfolded Wednesday.

"I've been heartened to see many members of the President's party speak up forcefully today. Their voices add to the examples of Republican state and local election officials in states like Georgia who've refused to be intimidated and have discharged their duties honorably," he said.

"We need more leaders like these -- right now and in the days, weeks, and months ahead as President-Elect Biden works to restore a common purpose to our politics. It's up to all of us as Americans, regardless of party, to support him in that goal.