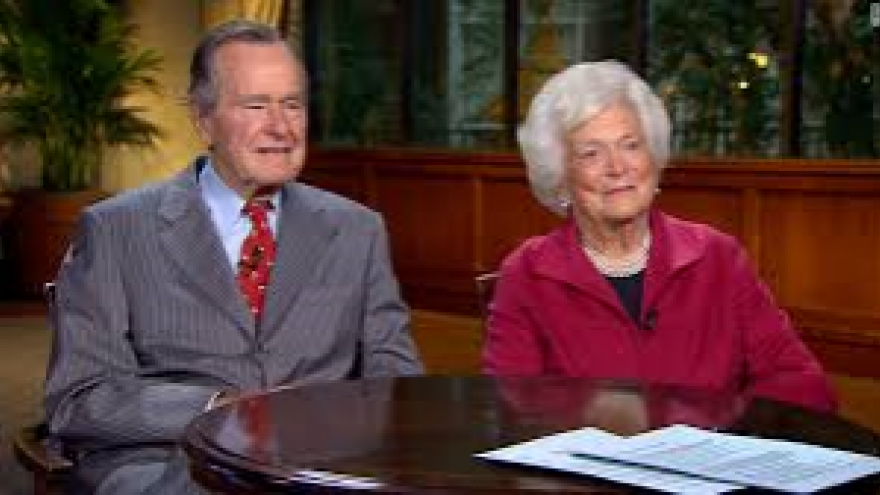 The Bushes live in Houston but also have a home in Maine, which is where they're staying.

In a statement issued Monday, they say they're praying for people in Texas. They praised people who are helping their neighbors, as well as the first responders and local elected officials "for their grit and determination in the face of this extraordinary storm."

The statement concludes, "This we know: Houston, and Texas, will come together and rebuild."

Harvey made landfall late Friday as a Category 4 hurricane and has lingered just off the coast, dropping heavy rain as a tropical storm. The slow-moving storm has caused catastrophic flooding in Texas.

Acevedo says the city has 185 critical rescue requests still pending as of Monday morning. He says the goal is to rescue those people by the end of the day.

The comments came at a news conference where officials provided updates on Harvey, which is still pouring rain on the Houston area.

Harvey came ashore late Friday about 30 miles (48 kilometers) northeast of Corpus Christi, Texas, as a Category 4 hurricane but has since been downgraded to a tropical storm. The slow-moving storm has caused catastrophic flooding in Texas.

The shelter set up inside the George R. Brown Convention Center in downtown Houston has already reached half its capacity.

Sandy says the shelter is currently out of cots and waiting for more to arrive.

With Tropical Storm Harvey still pouring rain on the Houston area, thousands more people are expected to need to evacuate their homes.

The Red Cross has also set up other shelters throughout the area.

The White House has said Trump will travel to Texas on Tuesday. More details of the trip have not yet been released.

Harvey is the first major natural disaster of Trump's presidency and a significant test for a White House that is often chaotic and rife with infighting.

A major South Texas airport has reopened after being closed due to Harvey.

Two other major airports in the region, George Bush Intercontinental Airport and Hobby Airport in Houston, remain closed as heavy rain and flooding continue. Both have been shut down since midday Sunday as Harvey-related flooding swamped roads leading to the airports

A Houston-area official says hundreds of people who've been rescued from their homes, vehicles and other places amid catastrophic flooding are being taken to dry land but not straight to shelters.

Harris County Judge Ed Emmett is the top administrator for the county that's home to Houston. He said at a news conference Monday that many people are being ferried to a parking lot, school or other dry area as rescue personnel move on to the next rescue that's needed. Those people then are struggling to find shelter, food and other resources.

Emmett says the focus now is on getting those people to shelters.

Meanwhile, Houston police Chief Art Acevedo on Monday told "Good Morning America" that he knows of 200 to 250 water rescues that still must be done in the city and that he hopes they'll be completed by the end of the day.

In an interview with Houston radio station KTRH Monday morning, Pence said the federal government will make the resources available to see Texas through rescue operations and recovery.

Pence noted that given the "magnitude of the flooding" that "it will be years coming back."

The vice president stressed that President Donald Trump has been "continuously engaged" on Harvey, noting that it is still the "beginning of the effort." He said details of Trump's visit to Texas will be "forthcoming."

President Donald Trump has issued a federal emergency declaration for Louisiana as a storm that's flooded Houston dumps heavy bands of rain on that state.

Louisiana Gov. John Bel Edwards says lifesaving efforts including search and rescue and shelters will be needed, especially in southwest Louisiana where forecasters say 10 to 20 inches (25 to 51 centimeters) of rain could fall.

Emergency vehicles made up most of the traffic in downtown Houston on what would have normally been a busy start of the work week.

Due to Harvey, the usually bustling business area was mostly deserted Monday morning.

The water had receded from parts of downtown Houston, near Buffalo Bayou, which flooded over the weekend from the lingering tropical storm. That situation could change as officials have started releasing even more water from reservoirs overwhelmed by Harvey.

About half of downtown Houston had no working traffic signals. Most businesses, including restaurants, were closed due to the storm.

Louisiana's governor is asking President Donald Trump for a federal emergency declaration for Louisiana since forecasters expect Harvey to cause significant damage in the state.

Gov. John Bel Edwards said he sent a letter to the White House requesting the initial disaster declaration for five parishes in southwest Louisiana, and could add more areas to the request later.

Edwards said life-saving efforts such as search and rescue and shelters will be needed, especially in southwest Louisiana where forecasters say 10 to 20 inches (25 to 51 centimeters) of rain could fall.

The director of the National Weather Service is warning that the catastrophic flooding that's overwhelming Houston and other parts of Texas will worsen in the coming days and then be slow to recede once Harvey finally moves on.

Director Louis Uccellini said during a news conference Monday that up to 20 inches (51 centimeters) of rain could fall in the coming days, on top of the more than 30 inches (76 centimeters) some places have already seen.

He says some of the heaviest rainfall today, at a pace of 6 inches (15 centimeters) an hour, will fall east of Houston in places such as Beaumont and Lake Charles, Louisiana.

He adds that while Houston is experiencing a break from the rain Monday morning, heavy rainfall is forecast to return later in the day into Tuesday.

The Houston police chief is concerned about the prospect of more flooding, but is "keeping (his) fingers crossed" that the rain will subside.

In an interview Monday on MSNBC's "Morning Joe," Chief Art Acevedo says drainage is a concern.

He says he's "not sure where the water is going because it's just so much that we can't really absorb more in the ground at this point. ... We have way too much water and not enough places for it to drain."

He says officers have voiced frustration that they don't have enough high-water vehicles to quickly help everyone who is stranded.

He also warned any criminals who might try to take advantage of the disaster that his force has already arrested half a dozen people for looting.

The Federal Emergency Management Agency is asking for volunteers to help Texas recover from Harvey.

William "Brock" Long, FEMA administrator, told a news conference in Washington Monday that "we need citizens to be involved," because the storm and resulting flooding is greater than the government can handle.

Long urges individuals and organizations to check the website www.nvoad.org or call 1-800-621-FEMA to find out how to help. He's asking for financial donations and for people "to figure out how to get involved as we help Texas find a new normal."

A National Weather Service official says the peak flooding from the Houston-area storm is expected to max out Wednesday and Thursday, but said the floods will be slow to recede and that catastrophic flooding will persist.

Harvey continues to head back toward the Gulf of Mexico at a slow pace.

The National Hurricane Center says in its 4 a.m. CDT update that the tropical storm that made landfall late Friday as a Category 4 hurricane, dropping heavy rain in the Houston area, still has sustained winds of up to 40 mph (65 kph) and is centered 20 miles (30 kilometers) east of Victoria, Texas, about 120 miles (193 kilometers) southwest of Houston. It continues to creep to the southeast at 3 mph (4.8 kph).

That means it remains virtually stalled near the coast and continues to drop heavy rain on the Houston and Galveston areas. In the past 48 hours, numerous spots in the region have measured more than 25 inches (64 centimeters) of rain.

The hurricane center says Harvey's center was expected to drift off the middle Texas coast on Monday and meander offshore through Tuesday before beginning "a slow northeastward motion." The center says those in the upper Texas coast and in southwestern Louisiana should continue to monitor Harvey's progress.

Houston officials continue to urge people to shelter in place and stay off flooded roadways as Harvey continues to batter the nation's fourth-largest city.

Public Information Officer Keith Smith also says Sunday that rescue efforts continue and now are focused on those who feel trapped inside a home or building.

Smith says the city's 911 emergency response system has been challenged by sharply increased call volumes since the tropical storm made landfall late Friday as a Category 4 hurricane. He says during a typical 24-hour period, the emergency response system receives about 8,000 calls. But during a 17-hour period following Harvey's landfall, more than 56,000 911 calls were received.

As the nation's fourth-largest city braced for more rain and rescues, officials started releasing even more water from reservoirs overwhelmed by Harvey even though the move aimed at protecting downtown Houston could make already devastating flooding worse around thousands of homes.

The strategic engineering move began early Monday. Harvey, which made landfall late Friday as a Category 4 hurricane and has lingered dropping heavy rain as a tropical storm, sent devastating floods pouring into Houston Sunday as rising water chased thousands of people to rooftops or higher ground and overwhelmed rescuers who could not keep up with the constant calls for help.

Jeff Lindner, a meteorologist for the Harris County Flood Control District, says residents affected by the release should pack what's needed and leave when the sun comes up.