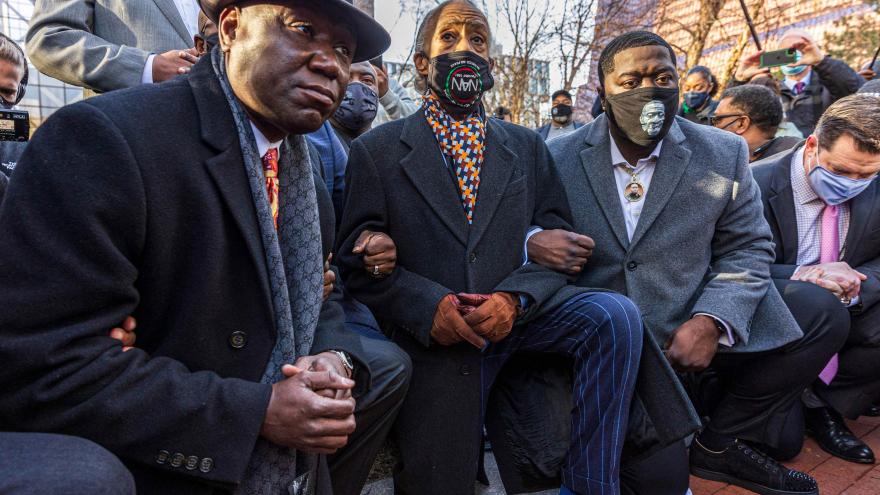 (CNN) -- George Floyd's family, attorneys and supporters knelt for 8 minutes and 46 seconds on Monday to mark the final moments of Floyd's life ahead of opening arguments in the trial of the former Minneapolis police officer charged in his death.

The group's gesture came after attorney Ben Crump, Rev. Al Sharpton and Floyd's relatives delivered poignant remarks outside a Minneapolis courthouse to honor Floyd's life and emphasize their belief that the 46-year-old father was murdered by Derek Chauvin.

"We are taking a knee for 8 minutes and 46 seconds, and we want you to think of during that time, why Chauvin didn't, in that time get his knee up?" Sharpton said.

As they knelt, Sharpton announced each minute as it passed.

Crump said he expects Chauvin's attorneys will attempt to assassinate Floyd's character to distract the jury from the facts of the case.

He said the attorneys will likely say Floyd had drugs in his system but that Floyd was "living, breathing, walking and talking" before Chauvin knelt on his neck.

"For all those people that will continue to say that this is a such a difficult trial, that this is such a hard trial, well we rebuke that," Crump said. "Because we know if George Floyd was a White American citizen and he suffered this painful painful tortuous death with a police officer kneeling on his neck, nobody, nobody will be saying this is a hard case."

Floyd's nephew Brandon Williams also spoke during the press conference about the impact his death has had on their family.

"You know we can't get George Floyd back, but we what we can do is make sure that no family feels this pain and suffering that we feel," Williams said.

"His daughter won't have a father in her life. His brothers won't have a big brother to protect them the way that he did. Somebody needs to be held accountable and we're going to demand that."