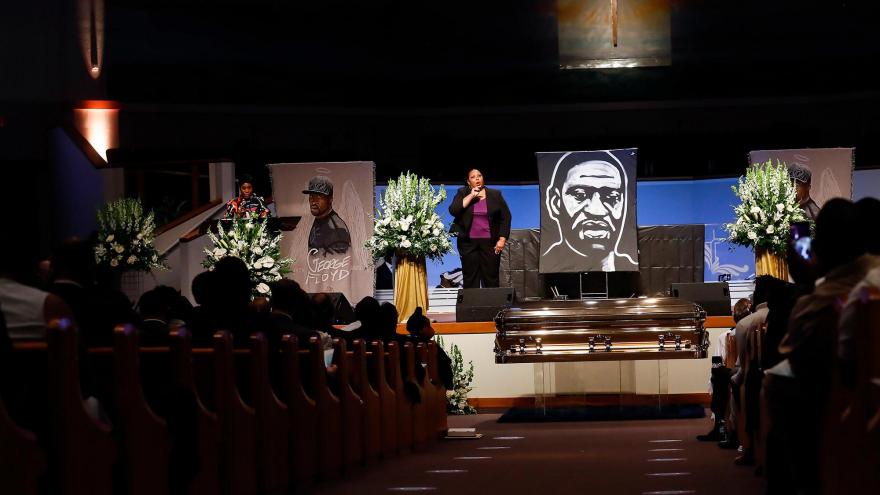 Pastor Kim Burrell sings "God Will Take Care of You" during the private funeral for George Floyd at The Fountain of Praise church on June 9, 2020 in Houston, Texas. Floyd died after being restrained by Minneapolis Police officers on May 25, sparking global protests.

(CNN) -- Thousands gathered in Houston, Texas, Tuesday to bid a final farewell to George Floyd -- the man whose last moments sparked outrage and protests across the country.

In the two weeks since Floyd's death, tens of thousands flooded the streets across the US decrying police brutality and demanding lasting change. Floyd's friends and loved ones say they hope his funeral isn't the end -- but instead marks the beginning of that widespread call for change.

Jonathan Veal, Floyd's longtime friend, told CNN's Don Lemon Tuesday night the two talked about the impact they wanted to make on their world and added Floyd had once said, "I want to touch the world."

"That comment, back in the eleventh grade, was prophetic in nature," Veal said. "He is literally having a global impact."

In the face of continuing demonstrations, city and state leaders have moved to tackle police reform. Members of the Minneapolis City Council announced they intend to defund and dismantle the city's police department. In New York, Gov. Andrew Cuomo says he intends to quickly sign a package of police reform bills legislators are preparing. And across the US, at least 11 cities and municipalities are starting to ban or have banned police officers' use of chokeholds, according to data gathered by CNN.

In other parts of the country, the use of tear gas by police was suspended after authorities faced harsh criticism by both demonstrators and other community leaders.

Seattle's City Hall filled with hundreds of protesters Tuesday who called for the mayor's resignation after she announced a 30-day ban on tear gas but police continued to use it to disperse protesters.

Mayor Jenny Durkan's office responded with a statement to CNN affiliate KOMO Tuesday saying there was still "critical work that needs to be done."

"Now we are faced with the pain and trauma relating to the murder of Mr. Floyd and the generations of systemic racism in our city and country that rightfully need to be addressed not through words but action," the statement said.

Meanwhile, Floyd's case is ongoing and all four officers involved in his death have been charged.

Derek Chauvin, who is seen in a bystander's video pressing his knee into Floyd's neck as the man begged for his life, was initially charged with third-degree murder and second-degree manslaughter. Prosecutors have added a more serious charge of second-degree murder.

CNN has reached out to the Hennepin County Attorney's office.

Families of other victims came to Floyd's funeral

Floyd was buried beside his mother -- who he called out for as Chauvin kept a knee against his neck.

"You called for mama. We're going to lay your body next to hers," Sharpton said. "But I know mama's already embraced you, George. You fought a good fight. You kept the faith. You finished your course. Go on and get your rest now. Go on and see mama now. We're going to fight on."

During the service, Floyd's family was surrounded by the families of other black victims who lost their lives at the hands of police, including Pamela Turner, Botham Jean, Michael Brown and Eric Garner -- who yelled he couldn't breathe shortly before he died, just like Floyd.

There was also the family of Ahmaud Arbery, a 25-year-old black man who was shot jogging earlier this year in Georgia by two men who claimed he looked like a suspect in a string of robberies.

"I stand with all mothers who have lost sons to these events," Arbery's mother, Wanda Cooper, told CNN Tuesday night. "We command change. We can't lose another life to such tragedy. Something has to change."

She said she believes her son also called out for her during his last moments.

"Ahmaud was killed in the streets as well and I know at some point, in the last minutes of his life, Ahmaud thought of me himself. I know that he cried out for me as well," she said. "It's heartbreaking to know that both left the way that they left."

In the days after Floyd's death, Minneapolis Mayor Jacob Frey said the tactic Chauvin used isn't one their officers are trained in and said there was no reason to employ it during the arrest.

"The technique that was used is not permitted," Frey had said. "And our chief has been very clear on that piece. There is no reason to apply that kind of pressure with a knee to someone's neck."

Houston Mayor Sylvester Turner announced during Floyd's funeral he was preparing to sign an executive order banning chokeholds in his city as well as enact other police reforms.

In Colorado, the Denver Police Department announced it was banning chokeholds and carotid compressions "with no exceptions." The department announced more changes in their procedures, including that officers will have to report to a supervisor if they intentionally point a weapon at someone.

And in Washington, the governor announced he wants police across his state to restrict their use of chokeholds when restraining suspects.

"We need to rethink the use of police force, and look more broadly at police tactics," he said. "Possibly there are things where life itself is in danger ... but police are going to have to convince us that that's the situation."