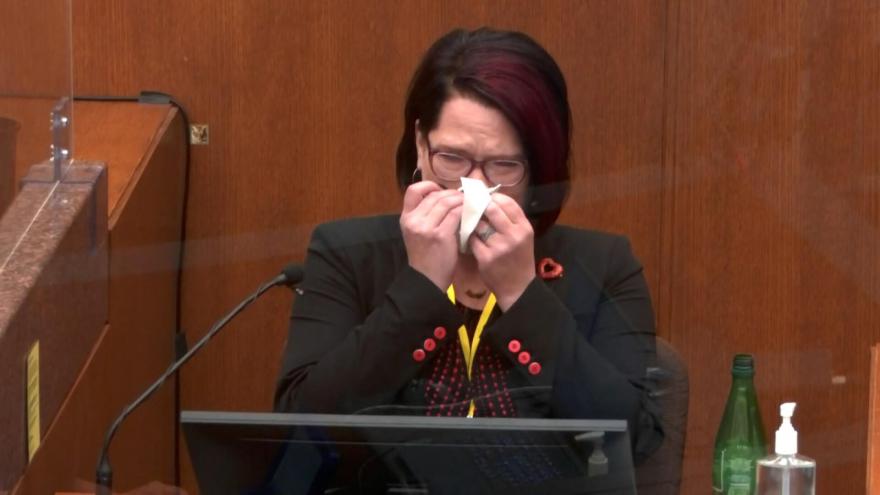 Courteney Ross took the stand in Derek Chauvin's criminal trial on April 1, describing Floyd as a kind man who had a deep Southern voice and who loved food.

(CNN) -- Former Minneapolis Police officer Derek Chauvin spoke to his supervisor in a phone call shortly after kneeling on George Floyd for over 9 minutes last May to explain his version of what happened.

"I was just going to call and have you come out to our scene here," Chauvin told Sgt. David Pleoger in a call captured on body camera footage and played in court Thursday. "We just had to hold a guy down. He was going crazy. He wouldn't ... he wouldn't go in the back of the squad -- "

The video then ends. In the rest of the phone call, Chauvin said they had tried to put Floyd in the car, he became combative, and then after a struggle, he had a medical emergency, Pleoger testified. Chauvin did not mention that he used his knee on Floyd's neck and back, Pleoger said.

Pleoger then drove to the scene and advised the officers there to speak to witnesses. "We can try, but they're all pretty hostile," Chauvin responded.

It wasn't until later that night at the Hennepin County Medical Center that Chauvin told his supervisor that he had knelt on Floyd's neck, Pleoger testified.

Chauvin's comments, which had not previously been released, are the second time in his criminal trial that the jury has heard his perspective in the minutes after Floyd's limp body was taken away in an ambulance. On Wednesday, a clip from Chauvin's body camera similarly showed him defending his actions to a critical bystander.

"That's one person's opinion," Chauvin responded as he got into his squad car. "We had to control this guy because he's a sizable guy. It looks like he's probably on something."

His comments about Floyd's behavior are belied by the many videos of the scene that show Chauvin kneeled on Floyd, who was handcuffed, long after he had passed out. Prosecutors said he knelt on Floyd for 3 minutes and 51 seconds during which Floyd was non-responsive.

Chauvin's attorney has not indicated whether he will testify in his own defense.

The testimony came on the fourth day of Chauvin's criminal trial. Earlier in the day, Floyd's girlfriend spoke about Floyd's struggles with opioid addiction, and several first responders said that Floyd appeared dead when they arrived on the scene.

Supervisor criticizes Chauvin's use of force

Much of Pleoger's testimony revolved around proper police protocols for the use of force. He testified that officers can use force on a person in certain circumstances, but that force should stop once the officer gets control of the person.

Upon reviewing the body camera footage, Pleoger testified that Chauvin's use of force should have ended earlier.

"When Mr. Floyd was no longer offering up any resistance to the officers, they could have ended the restraint," he said. "It would be reasonable to put a knee on someone's neck until they were not resisting anymore, but it should stop when they are no longer combative."

He noted that the requirement under police department policy is to call the ambulance and to render emergency aid while officers are waiting for the ambulance. He also said that police policy is to put restrained subjects on their side to help their breathing.

"If you restrain somebody or leave them on their chest and stomach for too long, their breathing can become compromised, and so you'd want to get them up out of that position after a while, so they don't suffer breathing complications," Pleoger said.

On cross-examination, he said he had not conducted a formal use of force review in the case because Floyd's death was escalated to higher-ups.

Two Hennepin County paramedics who treated Floyd last May said he was unresponsive, not breathing and had no pulse when they arrived on the scene.

"In layman terms, I thought he was dead," paramedic Derek Smith said.

Smith and his partner Seth Bravinder were first called to the scene as a non-emergency Code 2 for a mouth injury, but about a minute and half later, the call was upgraded to a Code 3 -- meaning the ambulance uses lights and sirens.

When they arrived at the scene, Floyd did not appear to be breathing or moving, they testified. Smith checked Floyd's pulse and pupils -- with Chauvin still kneeling on him -- and believed his heart had stopped. They then moved to get him onto a stretcher, and Bravinder bent down and motioned for Chauvin to lift his knee off Floyd.

They decided to put Floyd into the ambulance so they could treat him in a controlled environment. The equipment for treating patients with a stopped heart is located in the ambulance, and Bravinder said they were concerned about the crowd of bystanders.

One officer, Thomas Lane, also got into the ambulance with them and helped with chest compressions. Smith removed Floyd's handcuffs with a set of handcuff keys, he testified. With Floyd inside, Bravinder drove the ambulance several blocks and then stopped to treat him further, he testified.

Inside the ambulance, Floyd was "asystole," meaning he had flatlined and his heart showed no activity. Attempts were made to restart his heart with chest compressions, establishing an airway and electric shock, but he did not recover. They ultimately dropped him off at the hospital with no change in his status.

"I showed up, he was deceased, and I dropped him off at the hospital, and he was still in cardiac arrest," Smith said.

Fire Department Capt. Jeremy Norton testified that he and his partner met up with the ambulance two blocks away to help render aid to Floyd on the way to the hospital. His condition was grim.

"He was an unresponsive body on a cot," Norton said.

He testified no one ever found a pulse in Floyd's body. He later reported the incident to superiors in the Fire Department because it involved the death of someone in police custody and an off-duty firefighter was a witness.

Courteney Ross, 45, said she met Floyd in August 2017 when he worked as a security guard at the Salvation Army. In emotional testimony, she said they liked exploring the local sculpture garden and eating out on their dates together.

Floyd liked to work out every day, lifting weights, doing situps and pullups, and he never complained of shortness of breath, she said. He was a mama's boy who was a "shell of himself" after his mother's death in 2018, and she described the well-known photo of him as a "dad selfie."

They also both were addicted to opioids. Like many Americans, they were prescribed opioid painkillers to treat chronic pain, which ultimately led to an addiction and their use of street drugs, she testified.

In March 2020, she found Floyd doubled over in pain and took him to the emergency room, she testified. He was in the hospital for several days due to an overdose, she said. She said she believed he had started using again in May 2020.

In opening statements, prosecutors acknowledged Floyd's history of opioid addiction but said it was irrelevant to why he died last May. However, defense attorney Eric Nelson has argued that Floyd's true cause of death was drug use and several preexisting health issues.

CNN senior legal analyst Laura Coates explained that prosecutors sometimes decide to address "bad facts" head-on rather than allow the defense to do so.

"It's because as the prosecutor, you want to present and address and resolve these bad facts. You don't want to have the defense be able to say, 'Hey, jury, why didn't they tell you about this? Here are the things they don't want you to know,'" Coates said.

Correction: This story has been updated with the correct spelling of former Sgt. David Pleoger's last name.