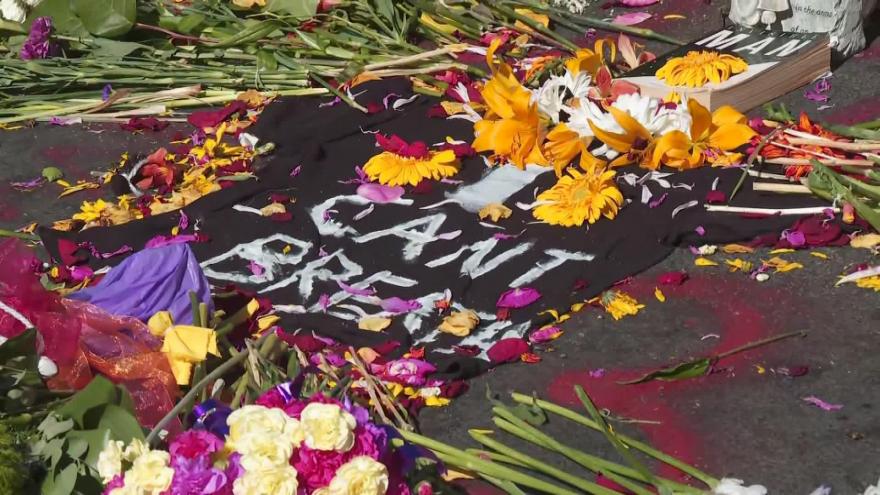 A memorial grows around the words "I can't breathe" outside Cup Foods, where Floyd died.

(CNN) -- Services honoring George Floyd, who died while being arrested in Minneapolis, will take place in three states over the course of six days.

A memorial service will be held in Minneapolis on Thursday from 1 p.m. to 3 p.m., family attorney Benjamin Crump said.

The Rev. Al Sharpton will deliver a eulogy at the memorial, which will take place at the Frank J. Lindquist Sanctuary at North Central University.

A public viewing and a private memorial service will be held in Raeford, North Carolina, on Saturday, Hubert Peterkin, the sheriff of Hoke County, said on Facebook.

The public viewing will be from 11 a.m. to 1 p.m. at Cape Fear Conference B Headquarters, followed by a private service for just the family at 3 p.m., Peterkin said. No protesting will be allowed.

"The memorial is about the life that Mr. George Floyd lived, and this is a time to embrace the family with expressions of love and kindness," Peterkin said.

Floyd's sister lives in Hoke County, according to CNN affiliate WRAL. She told WRAL recently that Floyd was born in Fayetteville, North Carolina, and "that his family would remember him" in the state, WRAL reported.

Next Monday, a public memorial will take place from noon to 6 p.m. at The Fountain of Praise Church at 13950 Hillcroft Ave. in Houston, the Fort Bend Memorial Planning Center said in a statement.

And on Tuesday, a private service will be held at an undisclosed location, the statement said.

"Due to concerns about the COVID-19 pandemic, social distancing is a major focus and those that attend either service are requested to wear masks and gloves for the safety of all," the memorial planning center said.

Floyd left Houston several years ago for a better life in Minnesota, the statement said.

Videos of Floyd's final moments show police officer Derek Chauvin -- who has since been fired -- pressing his knee on Floyd's neck. Other officers were kneeling on his back.

Floyd was under arrest after allegedly trying to use a counterfeit bill.

Chauvin has been charged with third-degree murder and second-degree manslaughter. The other three officers involved in the incident have not been arrested.

Floyd's death set off protests, sometimes violent, that have spread throughout the country and around the world. His family has repeatedly asked all protesters to remain peaceful.

Houston police Chief Art Acevedo said Sunday he wanted his department to provide a police escort when Floyd's body is returned to his home city from Minneapolis, as a show of support for the Floyd family.

"It's going to be a big deal for our city to bring him back home," Acevedo said. "He's well-known, he's known by a lot of our officers."

Flowers or other gifts to Floyd's family can be sent to Fort Bend Memorial Planning Center, 15006 Hwy 6, Rosharon, TX 77583.