George Floyd's friend who was in the car with him found out about his death on social media, he says 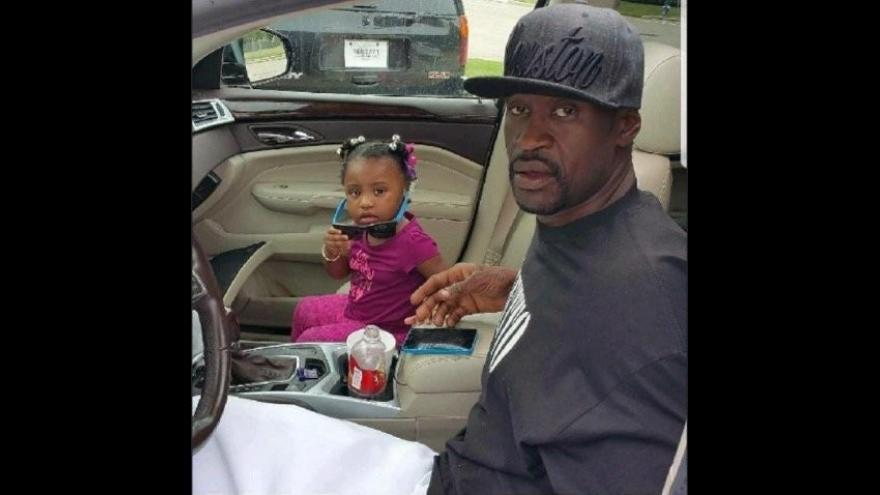 George Floyd with his now 6 year-old daughter, Gianna. These photos were taken when Gianna was a baby.

(CNN) -- George Floyd did not resist arrest and pleaded with police officers before his death last month in Minneapolis, his friend said.

Maurice Lester Hall, 42, was with Floyd in his car during the arrest that led to his death, he told CNN's Chris Cuomo on Thursday night.

The fatal encounter started when police approached both men while they were sitting in an SUV on May 25, he said. Floyd was in the driver's seat and was trying to figure out what was going on, Hall said.

One officer went on the passenger's side where Hall was and asked for his ID. Then Hall heard a loud sound as another officer tried to break the window on Floyd's side, he said.

"The energy was set wrong by the police when they approached him because they approached with, like, an energy where it startled (Floyd). ... And he was just trying to diffuse the situation as best, as humbly as he could," Hall said.

Floyd asked officers what they wanted him to do, his friend added. The officer asked him to show his hands and Floyd put his hands on the steering wheel, Hall said.

Shortly afterward, he said, officers dragged Floyd out of the vehicle.

"George ... retreated to his knees saying, hey, man, in so many words I've been hurt, please officer," Hall said. "In other words, like why are y'all detaining -- using such force right now with me? I mean, here I am."

Hall was left in the car under the watch of another officer while Floyd was taken across the street. While he could not hear much of what the officers were saying, Hall said, he could see Floyd handcuffed on the ground, squirming, pleading for air and saying he couldn't breathe.

When Floyd was shuffled away in a gurney, Hall was told he was free to go, and thought his friend had been taken to an ambulance. He found out on social media the next day that he was dead, said Ashlee McFarlane, Hall's attorney

"After seeing the video the next day like my lawyer said and knowing from that angle of the video that was released, it's horrific," Hall said.

Since Floyd died on May 25, throngs of protesters have flooded the streets to demand the arrest of all four officers involved.

Authorities initially arrested Derek Chauvin, the former police officer who pinned Floyd to the ground by his neck for 8 minutes and 46 seconds before he died. Prosecutors charged him with third-degree murder and second-degree manslaughter. But on Wednesday he was also charged with a second-degree murder count.