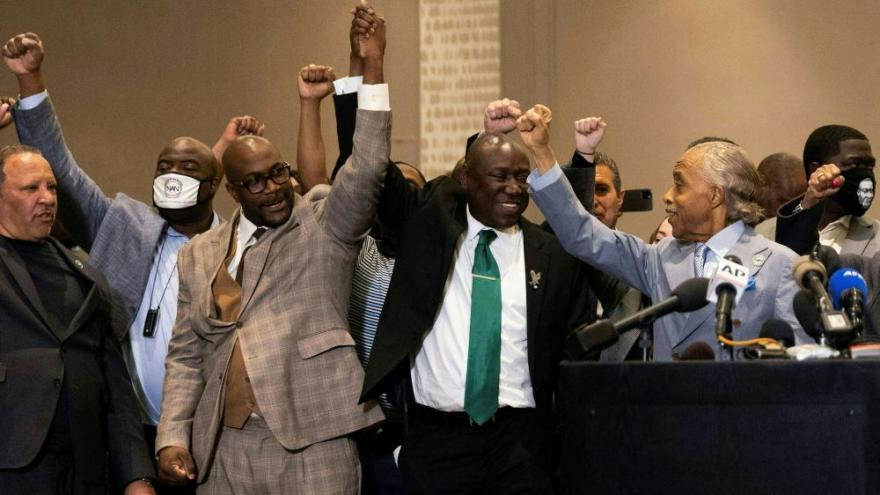 (CNN) -- George Floyd's brothers shared their pain and grief with the world for nearly a year. On Tuesday, they finally felt some relief.

Derek Chauvin, the former Minneapolis Police officer who kneeled on Floyd's neck for over 9 minutes last year, was found guilty in Floyd's murder on Tuesday. After the jurors deliberated for more than 10 hours over two days, the verdict was welcomed with waves of celebration in Minneapolis and across the country.

Floyd's death on May 25, 2020, led to what some describe as the largest protest movement in US history, and forced America to reckon with racial injustice and police accountability. All while his family joined a long list of relatives of Black men killed at the hands of police who have turned their pain into calls for accountability.

"We have to always understand that we have to march. We will have to do this for life," Philonise Floyd said. "We have to protest because it seems like this is a never-ending cycle"

About a dozen of Floyd's relatives, including his siblings, cousins and daughter Gianna gathered at a hotel a few blocks away from the Hennepin County Courthouse. Together, they prayed guided by the Rev. Al Sharpton and chanted Floyd's name.

They thanked the numerous activists who turned George Floyd's name into a rallying cry and called the verdict "victory for many."

Chris Stewart, one of the attorneys representing the family, said they teared up and embraced right after hearing the verdict.

"Today, the tears are of pure joy and pure shock because days like this don't happen. The whole world shouldn't have to rally to get justice for one man," Stewart said.

Terrence Floyd, another of Floyd's brothers, described the verdict as "monumental" and said he is grateful and proud of his brother.

Civil rights attorney Ben Crump, who represents the families of Floyd and Daunte Wright, urged people across the country to see the verdict as a sign of hope for the future.

"America, let's pause for a moment. Proclaim this historical moment, not just for the legacy of George Floyd but the legacy of America," Crump said. "The legacy of trying to make America for all Americans."

"Let this be the precedent where we overcome systematic racism and oppression," Crump added.

Outside the courthouse, Floyd's girlfriend Courteney Ross said she hopes the verdict will lead to further action in other police brutality cases.

"We're finally starting to see. We walked around with eyes wide shut for a long time, so they're starting to open today, and this is going to be the first in a future of change," Ross said.

Moments before, Ross was embraced by Toshira Garraway, who founded the group Families Supporting Families Against Police Violence and whose son's father was killed in 2009 deadly encounter with police in St. Paul, Minnesota.

"We'll continue to fight for the rest of them," said Garraway, referring to several Black men who have died at the hands of police in the area over the years.

In his first remarks following the trial, Minnesota Attorney General Keith Ellison praised the Floyd family members for their grace, class and courage.

"Although a verdict alone cannot end their pain, I hope it's another step on the long path toward healing for them," Ellison said.

He thanked the people who witnessed Floyd's death, recorded it and testified during the trial.

"They stopped and they raised their voices because they knew what they were seeing was wrong," Ellison said.