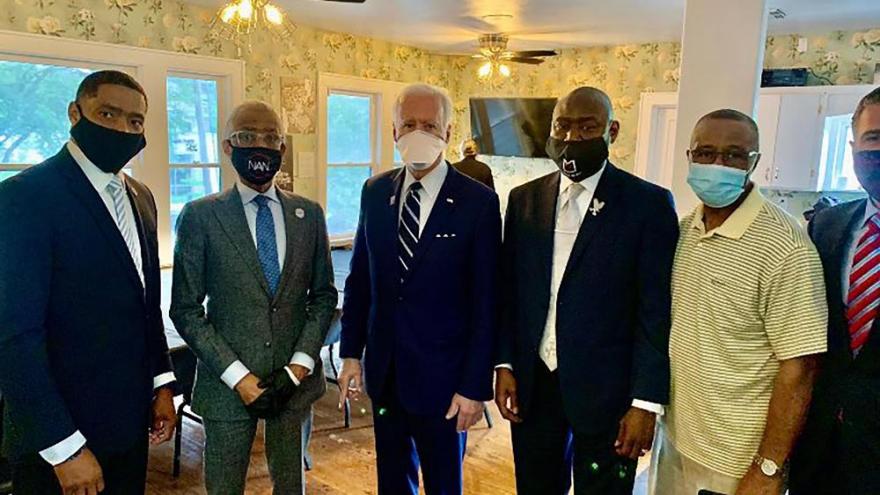 Al Sharpton posted this photo to his Twitter account after meeting with the family of George Floyd.

(CNN) -- President Joe Biden and Vice President Kamala Harris met on Tuesday with the family of George Floyd exactly one year after he was killed by a Minneapolis police officer, sparking nationwide protests against racism and police brutality.

Floyd's brother, Philonise Floyd, told reporters the family had a "great" meeting with the President and vice president and said: "He's a genuine guy. They always speak from the heart."

"We're just thankful for what's going on and we just want the George Floyd Policing Act to be passed," Philonese Floyd told reporters at the White House.

The meeting comes as the George Floyd Justice in Policing Act -- legislation that would set up a national registry of police misconduct, ban racial and religious profiling by law enforcement and overhaul qualified immunity for police officers -- remains stalled in the Senate. Biden had set an initial goal of having the legislation passed by Tuesday, but the White House backed off that deadline to allow negotiations to continue in Congress.

Rodney Floyd, another one of Floyd's brothers, told reporters the family is thankful Biden and Harris showed "great concern" for their family on the anniversary of his brother's death. He said the President and vice president asked them how they were doing and how they were taking care of themselves.

Floyd's nephew, Brandon Williams, said Biden told the family he wants to see the George Floyd Justice in Policing Act passed, but he wants to make sure it's the right legislation.

"He did let us know that he supports passing the bill, but he wants to make sure that it's the right bill and not a rushed bill," Williams said, adding that the President said he wasn't happy that legislation wasn't passed by the initial deadline he had set.

One of the Floyd family attorneys, Chris Stewart, said Biden played with Gianna Floyd -- George Floyd's daughter -- during the meeting and that "she had an absolute ball."

Biden told reporters that his meeting with the Floyd family was a mostly personal visit and that he had spent more than an hour with the family, and discussed specifically time he spent with Gianna Floyd.

"The Floyd family meeting went incredibly well. We spent a long time together. I got a chance to spend a lot of time with Gianna and her family," Biden said.

He added that Gianna had said she was hungry, so he got her some less than healthy snacks.

"She said, 'I'm really hungry.' She said to me, 'Do you have any snacks?' " Biden said. "My wife will kill me -- we gave her some ice cream, she had some Cheetos and I think she had a chocolate milk."

Harris said in her own statement that the family continues "to show courage, grace, and resilience" in the wake of Floyd's death.

"Mr. Floyd should be alive today," Harris said. She called for Congress to act with a sense of urgency and pass legislation that would "not bring back those lives lost, but it will represent much needed progress."

In addition to meeting with the President, the Floyd family is set to meet with the lead negotiators for the police reform bill in the Senate, New Jersey Democratic Sen. Cory Booker and South Carolina Republican Sen. Tim Scott. They will also meet with House Speaker Nancy Pelosi and other lawmakers at the US Capitol, including California Democratic Rep. Karen Bass, who led the charge to pass the police reform bill in the House of Representatives.

Biden wanted his meeting with Floyd's family to be private, according to White House press secretary Jen Psaki, "in order to have a real conversation and preserve that with the family."

"He has a genuine relationship with them," Psaki told reporters on Monday during a White House briefing. "And the courage and grace of this family -- and especially his daughter, Gianna -- has really stuck with the President. ... He's eager to listen to their perspectives and hear what they have to say during this meeting."

Philonise Floyd said on CNN's "New Day" Tuesday morning that since his brother's death, "Things have changed. I think that it's moving slowly, but it's making progress."

He said the police reform bill would be "one of the best things that you can pass across America. People shouldn't have to live in fear."

Scott has said that while he does not anticipate an announcement of a bipartisan deal on the police reform bill this week, "We're starting to see a framework," and added, "I think we can see the end of the tunnel." Booker echoed the optimistic sentiment and said, "I think we're a lot closer" to reaching a deal.

White House press secretary Jen Psaki said Biden wanted to give the negotiators on the Hill space to do their work, and that he has been speaking with police reform advocates throughout these negotiations. She also would not put a new timeline on when the President expects to sign a police reform bill into law, but said Biden wants to sign the bill into law "as soon as possible."

"We have been closely engaged with the negotiators and a range of parties on the Hill. We have also been respecting the space needed for the negotiators to have these discussions about where they can find common ground and where they can find agreement," Psaki said when asked what the President has been doing to try and push police reform closer to the finish line after his original deadline came and went.

When he spoke with reporters, Biden said he has spoken with the negotiators on Capitol Hill working on the bill and said he's hopeful there will be an agreement sometime after Memorial Day. "I'm optimistic," he said.

Biden has a relationship with the Floyd family and first met with them in June 2020 when he traveled to Houston to offer condolences ahead of Floyd's funeral. The President has spoken to members of the family on a few occasions over the past year, including last month after the verdict in the trial of Derek Chauvin, the former Minneapolis police officer.

Floyd's family announced on Tuesday that they are using $500,000 of their $27 million settlement with the city of Minneapolis to create The George Floyd Community Benevolence Fund. The fund will offer grants to organizations and businesses that serve the community at 38th & Chicago in Minneapolis. The intersection of 38th Street and Chicago Avenue is where Floyd died.