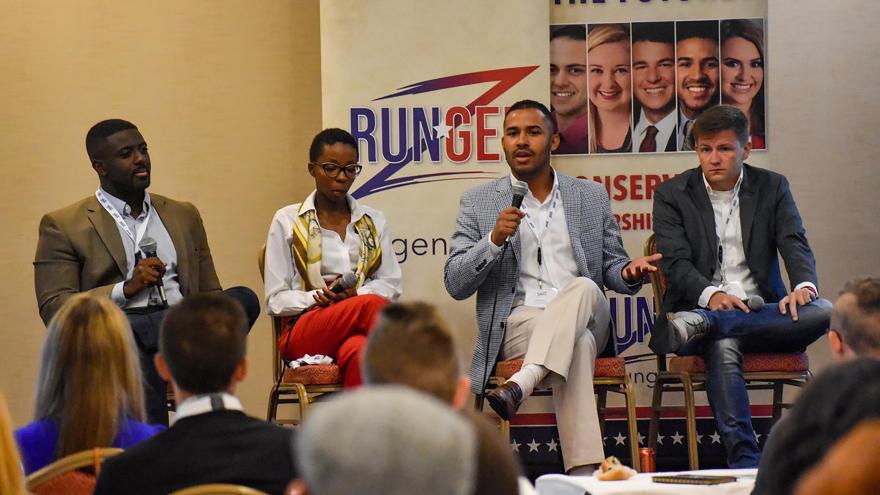 (CNN) -- When Roxy Ndebumadu, a Black conservative woman, ran for city council in Bowie, Maryland, at age 26, it was hard to find mentorship from elected officials of similar backgrounds.

"My, I guess you would say, makeup is very unique," Ndebumadu told CNN.

Now Ndebumadu, who was first elected to the city council in 2019, is trying to change that reality.

She, along with a number of other young conservatives, are working with Run GenZ, an organization co-founded in 2020 by Iowa state Rep. Joe Mitchell to recruit, mentor and train young conservatives running for office in down-ballot races.

Ahead of 2022, Mitchell says, Run GenZ will focus heavily on candidates for state legislature races in Texas, Florida and Iowa. So far, the group has received 283 applications across 48 states.

Mitchell, a Republican first elected to the state legislature in 2018 at age 21, said he aims to recruit a bench of young conservative leaders who are more reflective of the areas they are looking to represent.

"We understand (that) if we don't reach out, if we don't have a variety of candidates running, we're not going to be able to fare well in the future as we're trying to compete with an ever growing diverse population here in the US," he said.

In 2021, Run GenZ supported 15 candidates for down-ballot offices, 12 of whom won their races.

While the organization recruits candidates through different ways, its most fruitful recruitment effort has been speaking to chapters of youth groups such as College Republicans, Young Republicans and Turning Point USA -- the right-wing organization closely tied to former President Donald Trump.

Yet, Run GenZ says it is not beholden to any wing of the Republican Party and is willing to work with any candidate who believes in the conservative values of "limited government, free market capitalism, individual responsibility and fiscal restraint."

To boost its recruitment, Run GenZ recently partnered with Snapchat, the social media app popular among young Americans, as part of the app's "Run For Office" feature -- an in-app civic tool to help young people run for office up and down the ballot. According to Run GenZ, 2,925 people have expressed interest in the organization through Snapchat's tool.

'Saving democracy should not be a single party fight'

Democrats have in recent years also ramped up efforts to recruit a bench of candidates at the state and local level. In 2021 alone, Run For Something, a PAC that supports young progressives running for state and local office, has had nearly 25,000 people express interest in running for office with the organization. Like Run GenZ, Run For Something is one of the candidate recruitment organizations included in the Snapchat tool.

Amanda Litman, who co-founded Run For Something in 2017 and is the executive director of the organization, said "one of the benefits" the Republican Party has had for years over Democrats is a "longstanding infrastructure" focused on supporting state-level candidates.

While Democrats may be more public in their recruitment efforts, Litman said Republican efforts down ballot have been "stronger, better funded and more sustained."

"I think the more the merrier in getting young people to run," Litman said. "I am always really adamant that saving democracy cannot just be a singular party project, and I hope that what Run GenZ is focusing on is finding Republicans who are committed to the same pro-democracy values. Saving democracy should not be a single party fight."

A key part of Mitchell's vision includes a mentorship program that seeks to connect young elected officials with up-and-coming candidates. The organization hopes to formally provide 50 candidates with mentors by next year.

Reflecting on the pairing, Johnson said that in addition to teaching the importance of door knocking, Entsuah gave him advice on how to deal with racially charged rhetoric, such as what to do when someone asks how he can be "young and Black and a conservative."

"People have called me names because I'm not the illustration of what they want to see in a candidate," Entsuah said, adding that he told Johnson that while "there are a lot of days where you get heckled and people call you names," it is necessary to "realize that you do have your residents' and your constituents' best interest in mind."

Run GenZ has an advisory board of that is chaired by former Iowa Gov. Terry Branstad and includes former Govs. Chris Christie of New Jersey, Rick Perry of Texas, John Sununu of New Hampshire and Bill Owens of Colorado, all Republicans. The board was convened by Branstad, who met Mitchell through Iowa politics.

"So many of these problems that we're dealing with now are future-looking problems," Christie told CNN. The former governor has been an outspoken critic of Trump's election lies and has pushed for the GOP to focus on the future and not on past elections. "I think having people who are younger helping to make those decisions is really important," he added.

"One of the reasons I decided to get involved with Run GenZ is because from the beginning both Gov. Branstad and Joe (Mitchell) were saying to me they didn't want this group to be broken down along ideological lines. They wanted it to be all Republicans are welcome," the former New Jersey governor said.

Perry, who served as energy secretary under Trump, said he believes it's critical for young people to serve at the state level.

"Young people are going to inherit this place so let them be heard early on," he told CNN.

"I happen to think that the states are the most important foundation of our union," said Perry, who wrote a book titled "Fed Up!" about his frustration with federal government. He's recently come under scrutiny, with members of the House select committee investigating the January 6 attack on the US Capitol believing he was the author of a text sent to the then-White House chief of staff about a strategy to undermine the 2020 election, three sources familiar with the investigation told CNN earlier this month. A spokesman for Perry told CNN the former energy secretary denies writing the text.

Other efforts to grow the party

Run GenZ is one of many groups that wants to grow the GOP from the ground up.

In a push to enhance its ongoing efforts, the Republican State Leadership Committee this year launched the "Right Leaders Network," an initiative to recruit, train and mentor women and minority candidates running for state office.

The committee said it looked at how many sitting members of Congress previously served at the state level and built the network to consolidate its efforts to recruit and train women and minority candidates -- as future success of the party, the committee said, depends on its ability to recruit, train and support more women and minority candidates.

The new initiative will also focus on mentorship, and has an advisory council that includes Sens. Marsha Blackburn of Tennessee, Marco Rubio of Florida, Tim Scott of South Carolina and former UN Ambassador and South Carolina Gov. Nikki Haley, as well as a board of chairs that includes New Hampshire state Rep. Joe Alexander, who is also a co-founder of Run GenZ.

"If we are going to diversify the Republican Party, it's got to start at the state level," said Andrew Romeo, spokesperson for the Republican State Leadership Committee.

"The thought is, if we are able to recruit more candidates that look like their communities and better represent their communities then that will help the party grow and expand into the future because the statistics make clear those folks will become national leaders down the line," he said.