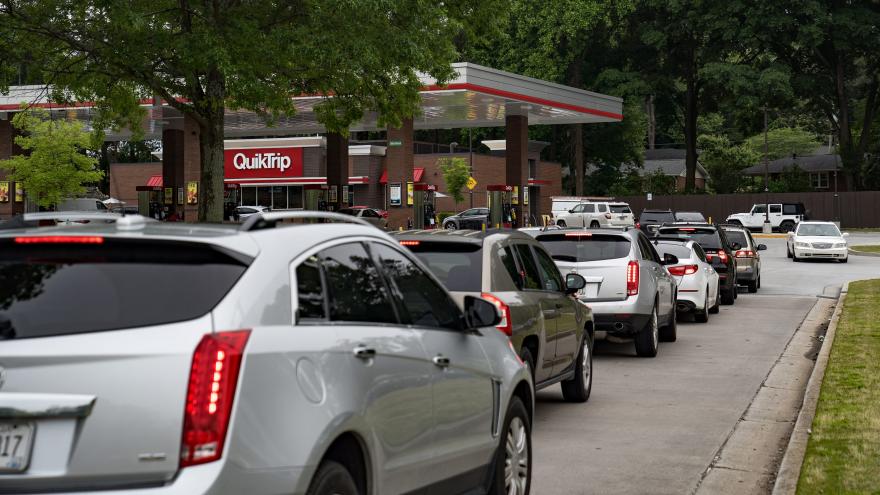 (CNN) -- Gas stations in the southeastern United States face significant outages Wednesday as the Colonial Pipeline shutdown stretches into a sixth day, sparking panic-buying that is exacerbating the supply crunch.

As of 7 a.m. ET, 24.8% of all gas stations in North Carolina, 15.4% in Georgia and 15% in Virginia are without gasoline, according to GasBuddy, an app that tracks fuel demand, prices and outages. All figures are higher than late Tuesday.

The supply crunch appears to be much worse in some major metro areas. GasBuddy reported outages impacting 71% of the stations in metro Charlotte, nearly 60% in Atlanta, 72% in Raleigh and 73% in Pensacola.

Experts and officials pleaded with Americans not to hoard gasoline in the wake of the ransomware attack on the Colonial Pipeline because overconsumption will only make the situation worse.

Yet US gasoline demand climbed by 14% on Tuesday compared with the week before, according to GasBuddy. At midnight ET on Wednesday, GasBuddy reported that nearly 1,800 gas stations were out of gasoline in Alabama, Georgia, Florida, South Carolina, North Carolina, Maryland and Virginia.

Some gas stations are being overwhelmed by intense demand following the Colonial shutdown, an industry trade group told CNN Business on Wednesday.

"Demand has been two to four times normal in many markets and the system, even when it isn't stressed, can't support that," Jeff Lenard, vice president of strategic industry initiatives at NACS, the leading trade group for convenience and fuel retailing, said in an email.

Meanwhile, average prices at the pump climbed above the key psychological milestone of $3 a gallon on Wednesday for the first time in more than six years, according to AAA.

"The American people can feel assured that this administration is working with the company to get it resumed as soon as possible, Granholm said.

The Colonial Pipeline, which supplies nearly half the gasoline and diesel to the East Coast, set a goal on Monday of "substantially restoring operational service" by the end of the week.

Granolm said that Colonial expects to decide by the end of business Wednesday whether to make a full restart. "But even after that decision is made, it will take a few days to ramp up operations," she said.

Part of the problem in the Southeast may be a shortage of tanker truck drivers needed to deliver the gas to stations. It's an issue that emerged even before the pipeline hack.

"This seems to be turning into a not-enough-truck-drivers-to-get-it-there story," Patrick De Haan, head of petroleum analysis at GasBuddy, wrote in a tweet.

Despite the supply shock, energy markets are not overreacting. RBOB gasoline futures ticked modestly higher Wednesday and remain up just slightly from Friday.

"East Coast gasoline is running scarce, but what is not moving there is building up on the Gulf Coast," Michael Tran, RBC Capital's director of global energy strategy, said in an email.

Lenard called out images on social media showing customers filling up not just their vehicles but any container available.

"That is a big problem," the trade group executive said. "Not only does that take away fuel from those who need it, it also creates concern over transport and storage, wherever they are going. Just because you have something with a lid doesn't mean you need to fill it with fuel."