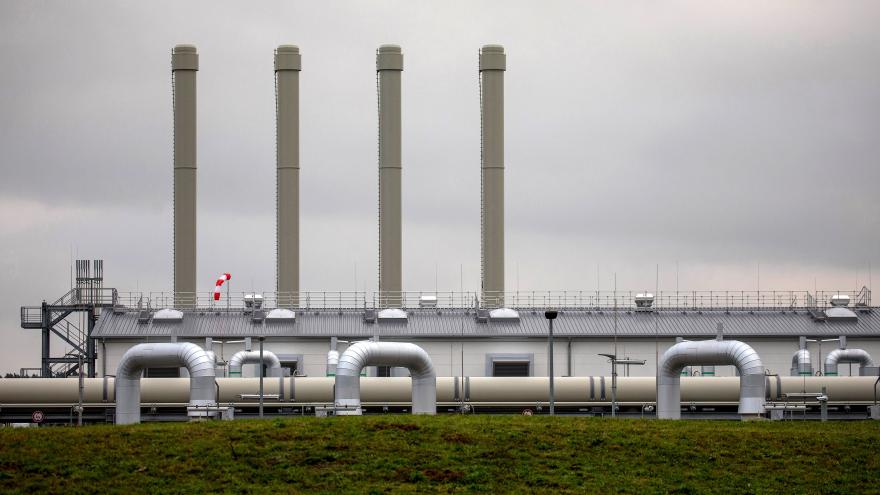 (CNN) -- Natural gas prices in Europe soared on Tuesday after Germany confirmed that it has suspended the process of certifying a controversial new Russian gas pipeline called Nord Stream 2.

The German energy market regulator said in a statement that it could not certify Nord Stream 2 as an independent operator because the company was based in Switzerland, not Germany.

"Following a thorough examination of the documentation, the [regulator] concluded that it would only be possible to certify an operator of the Nord Stream 2 pipeline if that operator was organized in a legal form under German law," it added.

European gas futures prices gained 10%, piling on the pain for businesses and households already paying much higher bills. Leading energy traders have warned of the risk of rolling blackouts in Europe in the event of a colder than average winter.

The German decision comes at a time of rising tension between the European Union and Russia over Ukraine and a migrant crisis on the Belarus-Poland border.

The European Union gets about 40% of its natural gas from Russia. Nord Stream 2, which bypasses Ukraine and connects Russia directly to Germany, was completed in September despite years of opposition from countries including the United States, which warned that it would boost Moscow's influence in Europe.

"We hope that our [European] friends may recognize that a choice is shortly coming between mainlining ever more Russian hydrocarbons in giant new pipelines, and sticking up for Ukraine and championing the cause of peace and stability," Johnson said in a speech in London.

Russia has denied withholding gas from Europe this year in order to gain political leverage, but deputy prime minister Alexander Novak said last month that "early completion of the certification" for Nord Stream 2 would help "cool off the current situation."

Natural gas prices have rocketed this year in Europe, where the fuel plays an essential role in power generation and home heating. Leading industry experts were already warning of the risk of shortages this winter, before Tuesday's news.

"We haven't got enough gas at the moment, quite frankly. We're not storing for the winter period," Jeremy Weir, CEO of energy trading company Trafigura, told a conference organized by the Financial Times. "So hence there is a real concern that. . . if we have a cold winter that we could have rolling blackouts in Europe."

Germany's energy regulator said Nord Stream 2, which is owned by Russia's state-owned Gazprom, was planning to establish a German subsidiary to own and operate the German section of the pipeline. Once the main assets and staff have been transferred to the subsidiary, and provided it satisfies all relevant legal requirements, the certification process could resume, it added.

Ukraine welcomed Germany's decision to put the approval process on hold. But it urged the West not to fall for what it called "Gazprom's tricks" in announcing the formation of a German subsidiary.

"This is a mockery of European rules. This does not correspond to neither the spirit nor letter of the European legislation on gas pipeline certification," Yuriy Vitrenko, chief executive of Ukraine's state energy company Naftogaz, said in a Facebook posted confirmed to CNN by the company's press office.

"In particular, we call on the US government to impose sanctions under US law on the Nord Stream 2 operator, which Gazprom claims to be creating. These new sanctions should last at least until Russia stops using gas as a weapon and acts in accordance with European rules," he added.