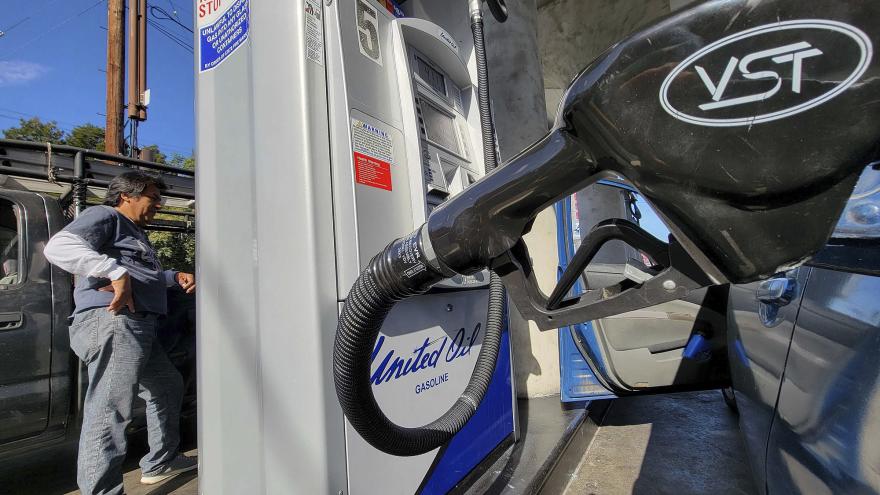 (CNN) -- Drivers have something to smile about: A historic drop in gasoline prices.

The national average for a gallon of regular gas has dropped every single day since soaring to a record high of $5.02 a gallon on June 14, according to AAA.

This 70-day streak of falling prices at the pump is the second longest on record going back to 2005, Bespoke Investment Group noted in a report titled "The Great American Summer of Falling Gas Prices."

The national average for regular gas dipped on Tuesday to $3.89 a gallon, down from $4.38 a month ago.

Although prices are 73 cents higher than a year ago, the recent drop is significant, especially given the inflation alarm bells set off by the surge above $5 just two months ago.

The only longer streak since 2005 lasted 117 days and ended in January 2015, according to Bespoke. Moreover, the percentage decline in gas prices so far this month is the steepest at this point in August on record, the report found.

There are a number of factors behind this summer's tumble in gas prices, and not all of them are positive.

First, $5 proved to be a breaking point for many drivers, with some choosing to drive less. That loss in demand helped balance the market.

At the same time, US recession fears and worries about China's economy drove oil prices sharply lower, taking gas prices along for the ride.

On the supply side, the Biden administration's unprecedented release of emergency oil from the national stockpile helped take pressure off energy prices.

At the peak in mid-June, the national average for regular gas was up by a staggering 50% on the year. But following the summer plunge, gas prices are now up less than 19% on the year. That is just one percentage point more than the average year-to-date change for all years since 2005, according to Bespoke.

"Who would have thought back in the spring that by late summer we'd be looking at nothing more than an average year in terms of the [year-to-date] change in gas prices," Bespoke analysts wrote in the note.

The streak of falling gas prices could end if oil prices continue to rise.

After dropping to a nearly eight-month low of $86.53 a barrel last week, US crude jumped 3% Tuesday and climbed back above $93 on signs that OPEC and its allies could take action.

Saudi Arabia's energy minister told Bloomberg News that OPEC+ may be forced to cut production, adding that "extreme" volatility and a lack of liquidity mean the futures market is increasingly "disconnected" from fundamentals.

A supply cut from OPEC+ would mark a significant shift from the influential producer group and could lift oil prices.