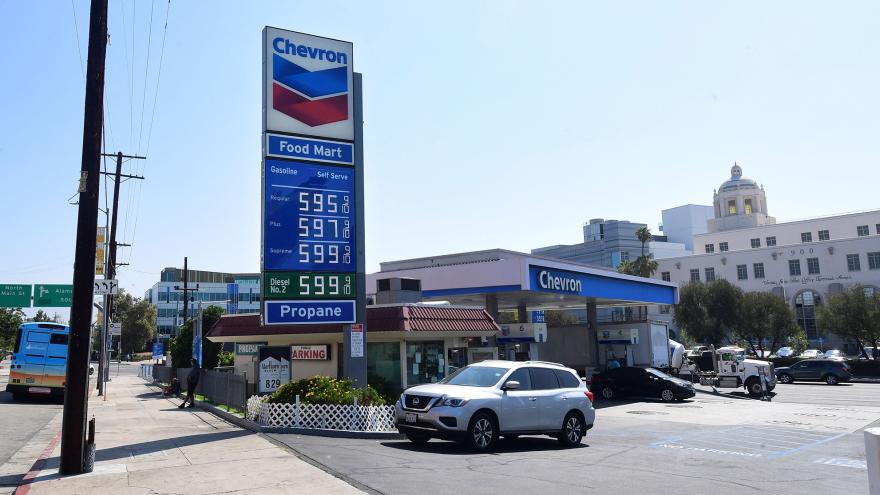 (CNN) -- American drivers need OPEC and Russia to come to the rescue.

Gasoline prices, averaging $3.12 a gallon in the United States according to AAA, are at seven-year highs just as millions of people hit the road for the July 4th holiday weekend. Some gas stations are even running out of gas due to a shortage of truck drivers.

Demand for energy is so strong as the world economy reopens that prices will likely go even higher unless Saudi Arabia-led OPEC and its allies start pumping a lot more oil soon. The oil producers, known collectively as OPEC+, could announce plans to do just that after a meeting on Thursday.

It's a stunning recovery from April 2020 when crude crashed below zero for the first time ever, bottoming at an unthinkable price of negative $40 a barrel.

But that was a vastly different time.

The world was drowning in excess oil as the pandemic and lockdown orders caused travel to grind to a halt. Demand for jet fuel and gasoline imploded. An epic price war between Russia and Saudi Arabia made things even worse.

If anything, the oil market is recovering faster than many anticipated as the successful rollout of vaccines has allowed governments to lift health restrictions and encouraged people to take road trips and fly.

Global oil demand is currently near 97.5 million barrels per day and will rise by another 2.2 million barrels by the end of the year, according to a recent Goldman Sachs report. That would create a 5 million barrel-per-day shortfall, the bank estimates.

The problem is that shortfall is "well in excess" of what can be made up for by Iran (still handcuffed by US sanctions) and American shale producers, Goldman said.

Some US oil executives seem to agree.

After years of blowing through cash and flooding the market with excess supply, US frackers are under enormous pressure from Wall Street. Investors want shale producers to exercise restraint before ramping up production.

"I think the discipline is holding," ConocoPhillips CEO Ryan Lance said Wednesday during a conference call. "And we don't really see today a pathway where the US starts to overwhelm such that OPEC would be concerned about that."

Translation: US shale isn't coming to the rescue, at least not yet.

Lance added oil executives want to see what the price of oil is once OPEC resumes its normal production and demand returns to pre-crisis levels.

"US shale producers are continuing to show discipline in terms of their spending and drilling activity, something we haven't seen previously," said Matt Smith, director of commodity strategy at ClipperData.

That's why Goldman Sachs analysts concluded: "Ultimately, much more OPEC+ supply will be needed to balance the oil market by 2022."

What will OPEC do?

OPEC+ has been adding supply, but only gradually.

After a June 1 meeting, the group reiterated previously announced plans to add 350,000 barrels per day in June and 441,000 barrels per day in July. It's possible that OPEC+ will take a gradual approach again Thursday due to renewed concerns about Covid-19 variants, specifically the Delta variant. Oil producers remain cautious -- they want to avoid getting caught flat-footed if demand stalls.

But the good news (for drivers) is that many OPEC watchers believe the group will respond more aggressively, especially because OPEC itself is expecting demand to keep rising. Russia has been especially vocal about the need to pump more oil.

"We believe they will answer the call to put more barrels on the market," Helima Croft, global head of commodity strategy at RBC Capital Markets, wrote in a note to clients.

Croft expects OPEC+ will agree to boost supply by between 500,000 barrels per day and 1 million, beginning in August.

Likewise, Goldman Sachs is betting OPEC+ will boost production by half a million barrels per day.

In a sign of how undersupplied the market is, Goldman Sachs said that even a hike of 1 million barrels per day would only dent Brent oil prices by $2 to $3 a barrel.

On the other hand, Rystad Energy oil market analyst Louise Dickson warned in a report that if OPEC+ boosts production by less than 500,000 barrels per day, it could "trigger an incredibly tight, high-price environment."

Although some may assume OPEC+ wants sky-high oil prices to fill its coffers, the group knows that could backfire.

If prices get too high, as they did in 2008 when crude hit $140 a barrel, it will cause people to drive less and accelerate the transition to electric vehicles. And high prices could allow US frackers to retake market share lost during the pandemic.

"OPEC+ would be prudent to tap into its vast spare capacity and bring stability to the oil market," Rystad's Dickson said.