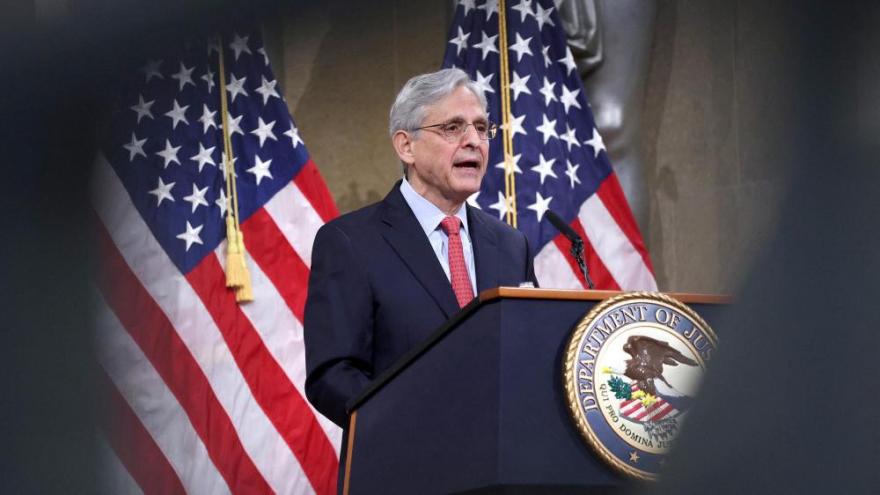 Attorney General Merrick Garland, pictured here on June 15, in Washington has ordered a temporarily halt to federal executions as Justice Department senior officials review the policies and procedures for the controversial punishment.

"Serious concerns have been raised about the continued use of the death penalty across the country, including arbitrariness in its application, disparate impact on people of color, and the troubling number of exonerations in capital and other serious cases. Those weighty concerns deserve careful study and evaluation by lawmakers," Garland said in a memo issued on Thursday.

There has not been a scheduled federal execution since President Joe Biden was sworn in to office.

"As the President has made clear, he has significant concerns about the death penalty and how it is implemented, and he believes the Department of Justice should return to its prior practice of not carrying out executions," White House spokesman Andrew Bates said in a statement.

There are 46 men currently on federal death row, and while there are more than 2,500 men and women on state death row, this directive from Garland does not halt those proceedings.

"The Department must take care to scrupulously maintain our commitment to fairness and humane treatment in the administration of existing federal laws governing capital sentences," Garland wrote in the memo, citing changes the Justice Department had made under former Attorney General William Barr to policies and procedures around the federal death penalty in 2019.

Barr revived the federal death penalty after a 17-year hiatus. Despite calls from civil rights leaders, celebrities, lawmakers and anti-death-penalty advocates to halt the executions, 12 men and one woman were executed during the last seven months of former President Donald Trump's term.

"To put that in historical context, the Federal Government will have executed more than three times as many people in the last six months than it had in the previous six decades," Supreme Court Justice Sonia Sotomayor wrote in her dissenting opinion on January 15 before the last scheduled execution of Dustin John Higgs.

Garland's directive will include a review of changes to regulations made in 2020 under Barr that expanded the permissible methods of execution beyond lethal injection, to include the use of firing squads.

During Garland's confirmation hearing in February, he said the use of the death penalty gave him "pause" because of the number of wrongful conviction cases that have occurred across the country.

"A moratorium on federal executions is one step in the right direction, but it is not enough. We know the federal death penalty system is marred by racial bias, arbitrariness, over-reaching, and grievous mistakes by defense lawyers and prosecutors that make it broken beyond repair," Ruth Friedman, director of the Federal Capital Habeas Project, said in a statement reacting to Garland's move to pause federal executions. "President Biden, with the support of the Department of Justice, can and should commute all federal death sentences to address these problems. Otherwise, this moratorium will just leave these intractable issues unremedied and pave the way for another unconscionable bloodbath like we saw last year."