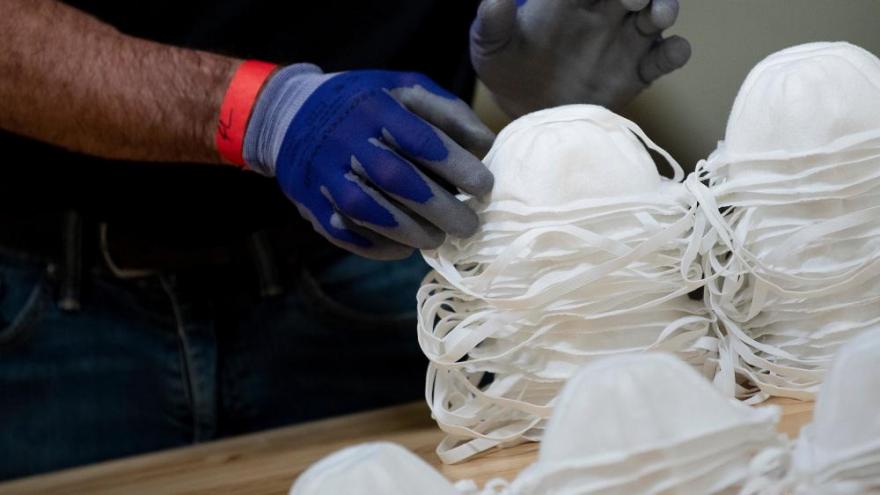 A new Government Accountability Office report out highlights how unprepared the US government was to tackle coronavirus and deal with the corresponding economic crisis that required Congress to get trillions in federal stimulus dollars out the door.

(CNN) -- A new Government Accountability Office report out Thursday highlights how unprepared the US government was to tackle coronavirus and deal with the corresponding economic crisis that required Congress to get trillions in federal stimulus dollars out the door.

The report -- which is just the latest look at the US government's response to the coronavirus -- lays out how the US fell short on everything from testing to ensuring hospitals and states had adequate supplies. It also looks closely at how agencies struggled to ensure billions in stimulus dollars got to American struggling with an economic crisis.

"Both the Congress and the administration have acted to mobilize resources quickly to help the nation respond to and recover from the pandemic. However, the negative effects of the pandemic on families, communities, and health care systems and on the long-term economic condition of millions of Americans and U.S. businesses are likely to persist into the future," the report states.

The report also found that because of an interpretation of the law Treasury was operating under, they did not use death records to ensure that the direct payment checks were going to people who filed taxes in 2019 and were still living. Therefore according to the report, the IRS paid out $1.4 billion in payments to descendants.

The report laid out that the Strategic National Stockpile was not equipped to handle the demand generated by states and localities in need of personal protective equipment, ventilators and other critical medical supplies.

According to officials from the Offices of the Assistant Secretary for Preparedness and Response who were interviewed by GAO "the Strategic National Stockpile did not have the capacity to provide states with supplies at the scale necessary to respond to a nationwide event such as the COVID-19 pandemic."

GAO noted that the Secretary of Health and Human Services Alex Azar had said in a February hearing on Capitol Hill that the stockpile wasn't equipped with the number of masks that might be needed. The stockpile only had 30 million N95 respirator masks and the secretary told Congress that 300 million could be needed for health care workers to combat the virus if it spread in the US.

"According to ASPR officials, HHS did not replenish personal protective equipment to previous levels following the H1N1 pandemic of 2009, because of a lack of funding," the report stated.

The report also criticized the Centers for Disease Control and Prevention on testing for compiling "incomplete and inconsistent" testing data that has hurt the government's response -- specifically, the report said, poor data "has made it more difficult to track and know the infection rate, mitigate the effect of infections, and inform decisions on reopening communities." It said HHS has directed improvements to reporting of tests to make the data more reliable, but notes those requirements do not take effect until August 1.

But it wasn't just responding to the immediate fallout from the virus that the US government struggled to respond to, according to the GAO report. The report also laid out that an influx of trillions in stimulus spending strained agencies like state unemployment offices and the Small Business Administration, which had never doled out the volume of funding they were required to under the pandemic.

The report said that when it came to handling an influx of unemployment claims and ensuring that an additional $600 payment was paid out, many states lacked the adequate infrastructure or staff to respond to the escalating number of claims.

"According to DOL and representatives of state workforce agencies, states with UI information technology systems that date as far back as the 1970s have reported crashes due to the current claims volumes. While DOL has assisted states' efforts to modernize their UI systems in recent years by, for example, providing grants, technical assistance, and guidance, relatively few states had load-tested their systems for the current volume of claims, according to representatives of state workforce agencies," the report said.

GAO also blasted the Small Business Administration for not providing them with detailed data on who received the loans, information GAO argued was essential to providing oversight.

"Congress has charged SBA with implementing the PPP and other provisions crucial to the nation's economic recovery. However, SBA to date has failed to provide information critical to our review, including a detailed description of data on loans made. The agency provided primarily publicly available information in response to our inquiries. SBA officials met with GAO in the beginning of June to discuss questions we had provided about 6 weeks earlier. GAO continues to work with SBA officials to obtain needed data and other information. Most agencies were generally able to provide GAO timely access to information for this report while executing their responsibilities during this unprecedented national crisis," GAO wrote.

In just a matter of months, GAO said of the small business loan Paycheck Protection Program that "lenders had made about 4.6 million loans totaling about $512 billion" as part of the Paycheck Protection Program. The GAO argued that SBA had not provided timely guidance to borrowers on how the loans would even be forgiven until most of the loans had already gone out the door. GAO also said that the program -- because in part the speed it was executed at -- was vulnerable to fraud.

"Because of the number of loans approved, the speed with which they were processed, and the limited safeguards, there is a significant risk that some fraudulent or inflated applications were approved. In addition, the lack of clear guidance has increased the likelihood that borrowers may misuse loan proceeds or be surprised they do not qualify for full loan forgiveness," the GAO wrote.

It also calls for Congress to require federal officials develop a preparedness plan for the aviation system. GAO has previously recommended the Transportation Department and other agencies do so, but it reports the agencies are at loggerheads over who is responsible. GAO said the plan should "ensure safeguards are in place to limit the spread of communicable disease threats from abroad while at the same time minimizing any unnecessary interference with travel and trade."