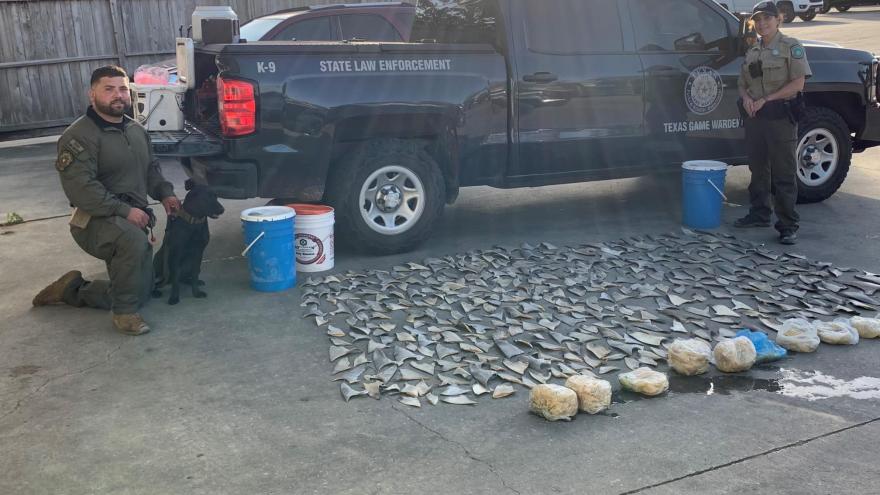 Kevin Winters, one of two Texas Game Wardens who discovered the illegal fins on April 13, told CNN that the case has not yet been submitted to the district attorney's office. The fins were all taken as evidence, according to a Facebook post from the Texas Game Wardens.

Some of the fins came from blacktip sharks, which are found throughout the Gulf of Mexico, although it isn't clear that the sharks originated from the gulf, Winters says. He added that they were not able to identify the species of all the sharks.

"Some were peeled already, prepared to be cooked for the soup," he said.

Shark finning -- the practice of removing shark fins at sea and discarding the rest of the shark -- is illegal in the United States, and the selling of shark fins is illegal in Texas. The Texas ban passed after the state "emerged as a hub for shark fins," according to marine conservation nonprofit Oceana.

Still, "the demand and the market and the trade for [fins] is there," Winters said.

Shark fin soup is a traditional and often expensive delicacy served in restaurants worldwide. But the persistent hunting of sharks for their fins has led populations of some sharks to decline as much as 90%, according to a 2018 study in Marine Policy.

This is the first known shark fin case in San Antonio, according to Winters.

"It is pretty significant that in a city that's one-and-a-half or two hours from the coast, we're still finding" shark fins for sale, he said.

He said that these kinds of busts "don't occur often" -- although he did once discover an even bigger cache of 861 fins at a store in Houston.

Winters was aided in the inspection by his canine colleague Bailey, who is trained to sniff out shark fin, sea turtle shells, red snapper, dove and oysters.

"Our sharks are apex predators. Our oceans need them," Winters said. "If we start losing our fish and our apex predators and so on, it can have a tremendous effect on human beings."

"It's imperative now that we have the opportunity to try to protect the resource as much as we possibly can," he added. "So we're not talking about sharks 10 years from now being extinct."