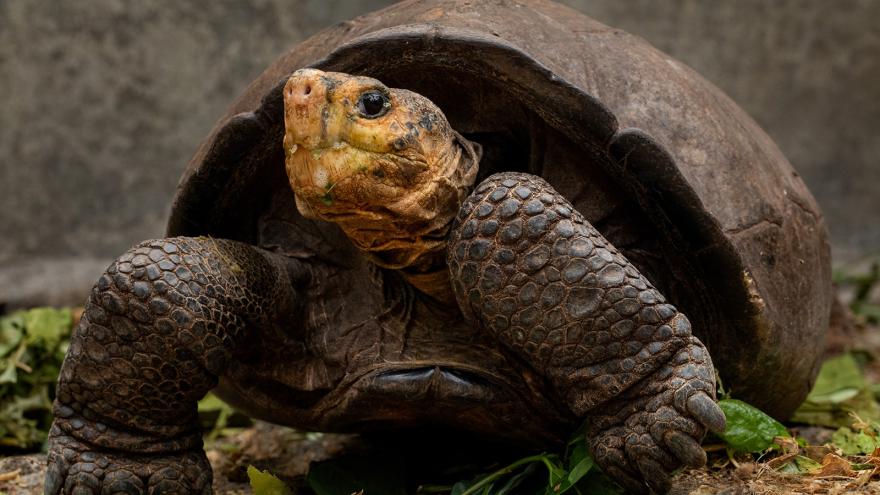 (CNN) -- When a small female tortoise was spotted in 2019 on the inaccessible volcanic island of Fernandina in the Galapagos, researchers were shocked.

Previously, only one other tortoise, a large male loner, had been found there in 1906 by explorer Rollo Beck. Scientists had thought this animal was the last of the "fantastic giant tortoise," or Chelonoidis phantasticus, rendering the species extinct.

Then they found Fernanda.

"It was almost too good to be true that there was a tortoise living on Fernandina. We were all just so excited," said Evelyn Jensen, lecturer in molecular ecology at Newcastle University in the United Kingdom and coauthor of a study published Thursday in the journal Communications Biology.

But when Fernanda was initially compared with the 1906 male specimen, kept in a collection at the California Academy of Sciences, the two looked so different that scientists had to question if they were the same species.

Some of the Galapagos tortoises have a domed upper shell, called a carapace, that resembles an upside-down bowl. But some species, such as the male specimen from Fernandina, have a saddleback-style carapace in which the front of the upper shell above the head and neck arches upward, Jensen said.

"The arch in the shell gives these tortoises much greater range of motion with their necks, allowing them to reach up higher to eat vegetation up off the ground, so it may have evolved to gain access to more food," Jensen said.

The 1906 tortoise had an extreme saddleback shape and distinctive flaring around the edges, which is why it was dubbed "phantasticus," she said.

Fernanda's status as a native phantasticus tortoise was in doubt because she had a smaller, smoother shell without any of this flaring, though some questioned if her growth had been stunted and caused her features to be distorted.

Perhaps Fernanda was another species entirely, having floated over from another island in the Galapagos archipelago. Together, these islands are home to 14 distinct species of giant tortoise. There may be another tortoise yet to be identified, according to recent research.

The Fernandina tortoises were thought to have gone extinct due to the island's active volcano, which has erupted about 25 times in the past two centuries. Lava flows have likely reduced the small pockets of vegetation where the tortoises could live and feed. The island is isolated along the western edge of the archipelago.

Reading in between genetic lines

To answer the question of Fernanda's heritage, the research team first sequenced Fernanda's complete genome and then compared it with that of the 1906 tortoise as well as genomes from the other 13 species of giant tortoise in the Galapagos. Fernanda's DNA told a surprising story, much like the discovery of the tortoise herself.

"We saw -- honestly, to my surprise -- that Fernanda was very similar to the one that they found on that island more than 100 years ago, and both of those were very different from all of the other islands' tortoises," coauthor Stephen Gaughran, geneticist and postdoctoral research fellow at Princeton University, said in a statement.

The species thought to be extinct for 100 years finally had a proven, living member.

Senior study author Adalgisa Caccone, a senior research scientist at Yale University, suggested that Fernanda could be a hybrid, created by a phantasticus mating with a now-extinct species that lived on the large neighboring island of Floreana. But more information is needed -- specifically, finding more tortoises on Fernandina.

There is evidence that suggests there may be more phantasticus. Tortoise scats have been spotted on the island as recently as 2014. Much of Fernandina has yet to be explored because extensive fields of lava prevent anyone from reaching its interior.

"Fernandina is the highest of the Galapagos islands, geologically young, and is mainly a huge pile of jagged blocks of brown lava," coauthor Peter Grant, professor emeritus of zoology and professor emeritus of ecology and evolutionary biology at Princeton University, said in a statement. "At lower elevations, the vegetation occurs in island-like clumps in a sea of recently congealed lava. Fernanda was found in one of these, and there is evidence that a few relatives may exist in others."

Two expeditions to search for more tortoises such as Fernanda since her 2019 discovery have been unsuccessful, but the Galapagos National Park and the Galapagos Conservancy plan to conduct more campaigns with the hope of preserving the species.

Fernanda now lives at the park's Fausto Llerena Giant Tortoise Breeding Center, which serves as a rescue and breeding facility. If more tortoises such as Fernanda are found, conservationists could begin a captive breeding program to keep her species alive. Both Fernanda and the 1906 tortoise have really high genetic diversity compared with the other species of Galapagos tortoise, Jensen said.

"This means that even if just a few other Fernandina tortoises were found and bred together, any offspring are unlikely to suffer negative impacts of inbreeding," she said.

Living on the edge

Galapagos tortoises can't swim, so how did they reach the islands in the first place? It turns out they can float, which means hurricanes and storms can transport them.

About 2 million or 3 million years ago, a storm carried giant tortoises westward from South America. The tortoises bred with each other on the islands where they landed, which caused them to evolve quickly. This interbreeding resulted in the 14 species, all of which descended from one ancestor.

The biggest difference in these tortoises is their shell shape, with domed tortoises living in humid environments with higher elevation, while the saddleback tortoises are in lower, drier ecosystems.

Numbers of Galapagos tortoises have declined by 85% to 90% since the early 1800s, according to the study, when whalers and pirates first arrived in the archipelago. As pirates raided South American colonies and whalers hunted in the surrounding waters, they made the giant tortoises their food source.

The tortoises could live for months without food or water, so the sailors would fill their ship hulls with live tortoises, then slaughter them along the way for fresh meat, Jensen said.

And when it came time to lighten the load, the live tortoises would be dumped into the ocean. Some floated and landed on different islands.

The 14 species are all on the International Union for Conservation of Nature Red List, ranging from vulnerable to extinct.

The tortoise, the largest cold-blooded terrestrial herbivore found on Earth, plays a critical role as an agent of stability in the Galapagos.

"The presence of tortoises maintains a certain type of ecosystem and vegetation community that is natural for the islands," Jensen said. "When tortoises are removed from the picture, the environment changes, and that impacts all the other species that rely on the tortoise-maintained ecosystem."

Fernanda, estimated to be over 50 years old, is a true survivor. She has outlasted volcanic eruptions and a shrinking habitat in the face of lava flows. And whether she's the last of her kind or just the beginning, Fernanda gives researchers hope that unseen species can still survive.