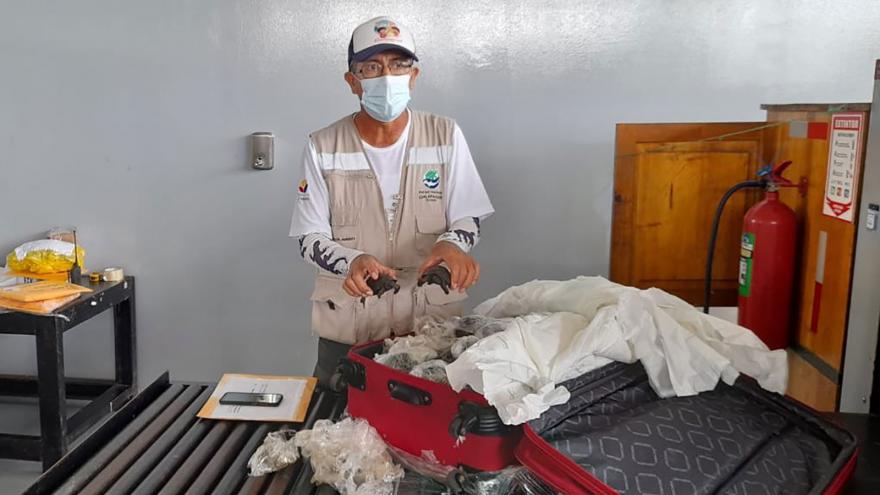 Ministry of the Environment and Water of Ecuador

(CNN) -- Airport authorities in the Galapagos Islands seized 185 newborn tortoises that were found wrapped in plastic in a red suitcase.

Officials discovered the tortoise hatchlings on Sunday when they X-rayed the suitcase, which was bound for the port city of Guayaquil, Ecuador, according to a statement from the Galapagos Ecological Airport.

Ten of tortoises were found dead and the remaining reptiles were sent to the Fausto Llerena Tortoise Center to be cared for by experts, according to a statement from Ecuador's Ministry of Environment and Water.

Five more tortoises have died, possibly due to the stress of being separated from their habitat, the ministry said.

Galapagos Conservancy Director of Conservation Wacho Tapia believes that the tortoises were removed from nests on Santa Cruz Island.

"The young tortoises were found in dreadful condition and appear to be extremely underweight," Tapia said in a statement. "We are in the process of collecting important data, including size and weight, for each tortoise to better assess its health condition."

A police officer has been arrested in connection to the alleged smuggling and will be charged with crimes against wildlife, which is punishable by up to three years in prison, according to the Ministry of the Environment and Water.

The Galapagos Conservancy estimates that there are now only 20,000-25,000 wild tortoises that live on the islands.

The Galapagos archipelago includes 19 islands in the Pacific Ocean roughly 621 miles from the Ecuadorian coast. The Galapagos were declared a UNESCO World Heritage Site in 1978.