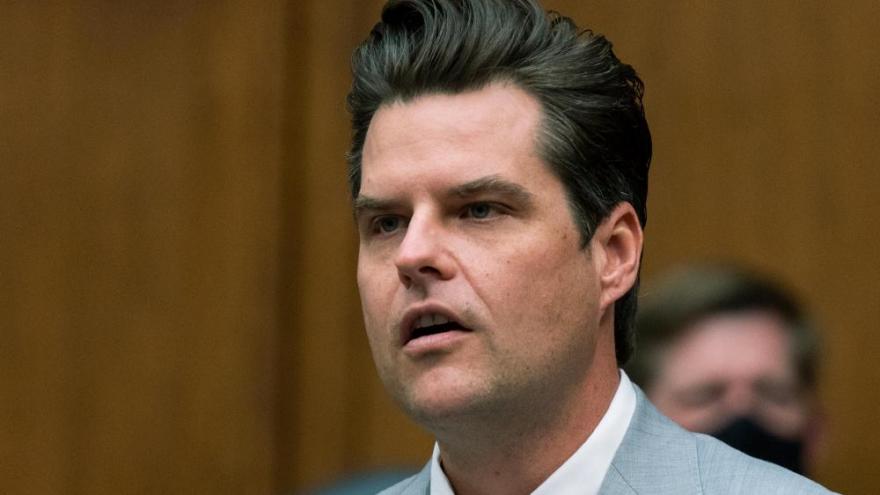 Rep. Matt Gaetz, pictured on April 14 in Capitol Hill, tells his colleagues privately that he's been treated unfairly, as he faces a career ending scandal, but he's being cooperative with the Justice Department as he remains on shaky ground.

(CNN) -- Rep. Matt Gaetz, facing a scandal that threatens to end his career, is privately telling his colleagues that he has been treated unfairly while at the same time saying he's been cooperative with the Justice Department's investigation as he remains on shaky ground.

On Tuesday, Gaetz came to the Capitol for the first time since the federal investigation was revealed, engaging in combative exchanges with reporters. Since then, he's kept a low-profile on Capitol Hill in the rest of his first week back, avoiding his congressional office, attending committee hearings, taking side entrances onto the House floor and largely ignoring reporters' questions.

Gaetz has spent hours on the House floor during long vote series this week, sitting in the back of the chamber with a handful of his closest allies in the House Republican conference.

"I talked to him a little bit about Jesus -- that's about it," said Rep. Tim Burchett, a Tennessee Republican who has been seen sitting next to Gaetz on the floor for extended periods of time. "I'm a Christian -- not a good one -- that's what I try to talk to folks about when they're hurting."

Gaetz is facing a federal investigation into whether he broke sex trafficking laws and had sex with a 17-year-old girl, allegations that could carry severe penalties. Most Republicans are steering clear of Gaetz and want nothing to do with the controversial Republican who already was a lightning rod within his own conference before the allegations came to light.

But Gaetz does have some close allies, namely Republicans who like himself are some of the strongest defenders of former President Donald Trump. One Republican told CNN he encouraged Gaetz to clear his name amid the swirling allegations.

"He didn't come to me, I went to him. I went to him to say, you know, 'I think you just need to make sure, don't make it a battle, clear your name,'" Rep. Pete Sessions of Texas told CNN. "I've been in this body for a while. It requires a lot of introspective thinking about not just the way you see things, but the way other people see things. And so, I've encouraged him to make sure he thinks about the way other people think about things. And he feels very sure that what he has accomplished and stands for will make that test to his advantage."

Sessions said that Gaetz made the case that he is fully complying with law enforcement on the investigation. "The overwhelming sense I have is, is that he feels like he's attempting to comply and gave law enforcement, openly, information," Sessions said.

Rep. Louie Gohmert, who has also been seen sitting next to Gaetz on the floor for long periods of time throughout the week, said he and Gaetz have not discussed the investigation, but he reiterated that Gaetz told him he feels he has been treated unfairly.

"I haven't pressed him on it other than he feels like he's being treated very unfairly and it sure looks like he is," the Texas Republican said.

Gaetz has denied the allegations against him and has tried to stay in the public eye writing an op-ed where he called the allegations "smears" and speaking at a conservative gathering in Florida before he returned to Washington.

Even before the investigation was revealed earlier this month, Gaetz was a controversial figure within the Republican conference, as many of his colleagues were turned off by his antics that often got him on television, as well as his hard-charging push against his colleagues who crossed Trump. But Gaetz's place in the Republican conference appears secure, for now, as House leaders said they aren't planning on taking any action against him unless he's indicted -- which under House rules would mandate his removal from his committee assignments.

House Minority Leader Kevin McCarthy said he spoke this week to Gaetz about the investigation, and that Gaetz told him he was innocent.

"Matt Gaetz is, is the same as any American he's innocent till proven guilty. There's no charges against him yet if a charge comes forward that would be dealt with at that time," McCarthy told reporters.

McCarthy sidestepped questions from CNN about whether he was ever warned about Gaetz's behavior before the new allegations came to light. "You'd have to see Matt Gaetz. If you wonder if I knew anything about what that is being alleged now? No," McCarthy said

McCarthy also denied knowing about a private conversation then-Speaker Paul Ryan's staff had with Gaetz about professionalism. "I did not know of that conversation. I don't know what that conversation was even about, just what I read in the paper," he said.

Gaetz's more moderate colleagues who are facing tough reelection races are taking steps to distance themselves from Gaetz. At least three House Republicans, including Rep. John Katko of New York, are donating the campaign contributions Gaetz gave them.

While on Capitol Hill, Gaetz has avoided his office, where a television camera has been positioned outside for most of the week. On Wednesday, he briefly attended a House Judiciary Committee meeting to cast a vote. At a House Armed Services Committee hearing Wednesday, Gaetz questioned the commander of US Southern Command, and he appeared at the panel's hearing virtually on Thursday to ask the top US commander in Europe questions about the F-35 and Turkey's air defense systems.

Gaetz penned another op-ed Friday in the "Guns & Ammo" magazine, defending the 2nd Amendment and attacking the Biden Administration's attempts to implement gun control measures. The op-ed was published -- and Gaetz promoted it on Twitter -- the day after a mass shooting in Indianapolis and after a flurry of gun violence in the last month.

Gaetz first attacked media and CNN on Tuesday when asked about the allegations and the ongoing investigation into him. His campaign, which had a $1.8 million fundraising haul in the first three months of the year, sent out several fundraising pleas in the same vein. On Wednesday when he was questioned by reporters, however, Gaetz just avoided them.

Sessions said that from his conversations with Gaetz, the Florida Republican believes "there are things that are being said about him that he disagrees with."

"So, it's a question of is there something about that or, is it not true? And if it's not true, he does need stand up for it," Sessions said. "If there is something there that he needs to have introspective thinking about, then he needs to think about that too."