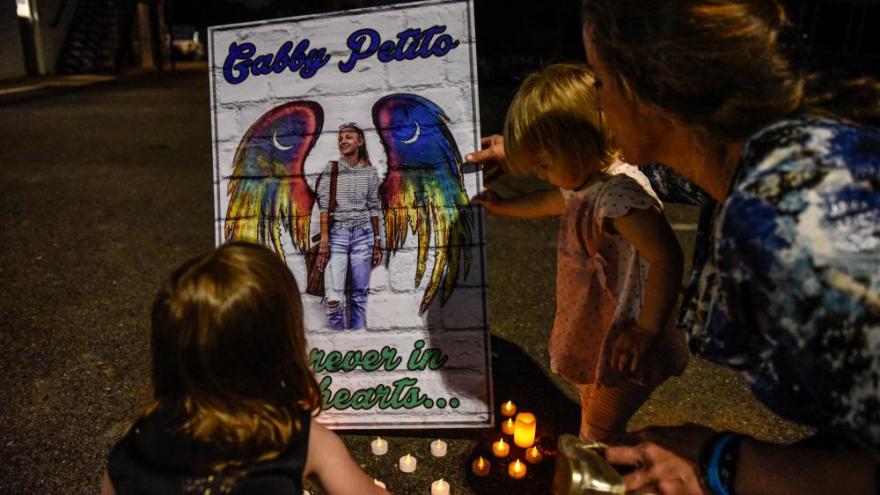 After details about the circumstances of her death were announced to the public, Gabby Petito's parents are finally bringing home the remains of their 22-year-old daughter, and pictured, people honor her in New York on September 24.

(CNN) -- After heartbreaking and revealing details about the circumstances of her death were announced to the public, Gabby Petito's parents are finally bringing home the remains of their 22-year-old daughter.

More than a month after her body were discovered in Wyoming's Bridger-Teton National Forest, Petito's family traveled to Wyoming to receive her remains and prepare to lay to rest the young woman whose death has drawn intense interest while sparking conversations about the large number of missing persons cases each year -- and why others don't get as much attention.

The funeral director at Valley Mortuary, Tyson Clemons, told CNN her remains were picked up Saturday.

Last week, Dr. Brent Blue, the Teton County Coroner, told CNN that he released Petito's remains to the mortuary on Tuesday, the same day he announced his long-awaited determination on the manner and cause of her death.

Blue had made an initial ruling that Petito, who did not return from a summer road trip with her fiancé Brian Laundrie, died by homicide. On Tuesday, he elaborated to say her death was caused by manual strangulation and that he believes she was strangled by a human being.

Blue was not able to pinpoint the day or time Petito died, but he did add that her body was left in the wilderness for three to four weeks.

Photos posted by the family on Twitter show them in Wyoming, honoring Petito amid the beautiful scenery she took in during the final days of her life.

"I just, I hope that she didn't suffer and that she wasn't in any pain. That she was in a place that she wanted to be, looking at the beautiful mountains," her mother, Nichole Schmidt, told 60 Minutes Australia.

Tension and conflict in her final weeks

The investigation into who killed Petito and what happened leading up to her death is ongoing, with many more questions still unanswered.

Petito had been traveling with Laundrie in a van across the US for much of the summer. But when he returned to the home they lived in with his parents in Northport, Florida, she was not with him.

Shortly after Petito's parents reported her missing, Laundrie disappeared. Authorities are still searching for him, though he does not face charges in her death.

And Petito's parents are eager for him to be found.

"I just hope he's found. I really do ... I mean, like, alive," Joe Petito, Gabby's father, said to Dr. Phil during an interview with the talk show host that aired in early October. "I want to see him in a jail cell for the rest of his life."

The time between Petito's disappearance and the collection of her remains has been marked by revelations of tension and conflict between the couple in her final weeks.

She was first reported missing by her parents on September 11, and after an extensive search, her remains were found September 19 near where their van was last seen three weeks earlier. The national focus on her whereabouts revealed they were involved in a domestic dispute in Utah in August.

On August 12, the couple was stopped by police after a 911 caller told dispatchers he saw a man hitting a woman, according to audio provided by the Grand County Sheriff's Office in Moab, Utah.

On August 27, a witness observed a "commotion" as Petito and Laundrie were leaving the Merry Piglets Tex-Mex restaurant in Jackson, Wyoming -- one of the last reported sightings of Petito before her death.

Petito was in tears and Laundrie was visibly angry, going into and out of the restaurant several times, showing anger toward the staff around the hostess stand, the witness Nina Angelo said.

Angelo told CNN she did not see any violence or physical altercation between Petito and Laundrie.

That day, an "odd text" from Petito worried her mother that something was wrong, according to a police affidavit for a search warrant for an external hard drive found in the couple's van.

"Can you help Stan, I just keep getting his voicemails and missed calls," the message read, according to the affidavit. Stan was a reference to Petito's grandfather, who her mother said Petito never referred to that way, according to a police affidavit.

Petito called her mom regularly, and those conversations appeared to reveal "more and more tension" in Petito's relationship, according to the affidavit.

Investigators said Laundrie's parents told them on September 17 he had left home days earlier and was headed to the nearby Carlton Reserve -- sparking a search of the nature reserve's 25,000 acres. Initially, his parents said he left on September 14, but Laundrie family attorney Steven Bertolino later said, "We now believe the day Brian left to hike in the preserve was Monday, September 13."

Laundrie has not been charged in Petito's death. He was indicted on charges of allegedly using two financial accounts that did not belong to him in the days following her death.

In a statement , Laundrie's family attorney Steve Bertolino said Laundrie had used a debit card that belonged to Petito but noted he was not a suspect in her death.