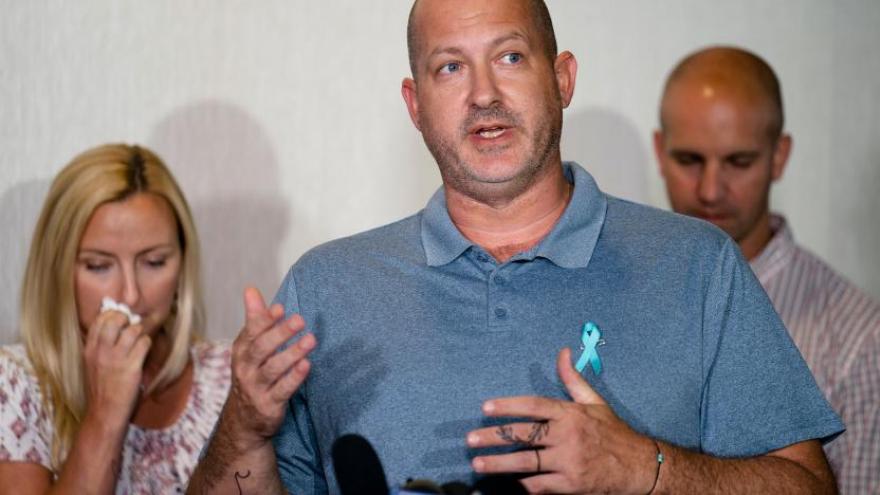 Joe Petito speaks at a news conference, in Bohemia, New York on Tuesday, Sept. 28, 2021. The family of Gabby Petito has filed a civil lawsuit against Christopher and Roberta Laundrie, alleging they knew their son Brian Laundrie killed Gabby Petito and were working to help him flee the country.

(CNN) -- The family of Gabby Petito has filed a civil lawsuit against Christopher and Roberta Laundrie, alleging they knew their son Brian Laundrie murdered Gabby Petito and were working to help him flee the country.

In the lawsuit, Joseph Petito and Nichole Schmidt allege Brian Laundrie told his parents about killing Gabby Petito around August 28.

"While Joseph Petito and Nichole Schmidt were desperately searching for information concerning their daughter, Christopher Laundrie and Roberta Laundrie were keeping the whereabouts of Brian Laundrie secret, and it is believed were making arrangements for him to leave the country," the suit alleges.

Petito and Laundrie, who were engaged, were on a monthslong van-life trip through the western United States when she was killed.

The lawsuit says Petito called members of her family almost daily. Schmidt's last communication with her daughter was on August 27, the suit says. Her parents believe that was the day she was killed, citing a text message that was sent from Gabby Petito's phone later that day where her grandfather was referred to as "Stan," something their daughter Gabby would have never done. The lawsuit alleges Brian Laundrie sent that text.

The lawsuit also claims that on August 30, Brian, pretending to be Gabby, sent a text message to Schmidt that there was no service in Yosemite Park. The family believes this was done to make her believe Gabby Petito was still alive.

Laundrie arrived at his parents' home in North Port, Florida, on September 1, police have said.

In the lawsuit, Joe Petito and Schmidt say that the Laundries refused to respond to them or law enforcement when they inquired whether Gabby Petito was alive and if not, where her remains were.

"In doing so, Christopher Laundrie and Roberta Laundrie acted with malice or great indifference to the rights of Joseph Petito and Nichole Schmidt," it continues.

The lawsuit alleges that around September 10, Roberta Laundrie blocked Schmidt from calling or texting her cell phone and also blocked her on Facebook. Schmidt reported Petito missing to police in New York, where the couple left for their trip, on September 11. Petito's body was found in Wyoming eight days later.

Brian Laundrie left his parents' house the week of September 13 and was not seen again. His parents said he told them he was going on a hike, according to their attorney.

In a statement to multiple media outlets a week after Gabby Petito's body was found, Laundrie family attorney Steven Bertolino said, "Chris and Roberta Laundrie do not know where Brian is. They are concerned about Brian and hope the FBI can locate him."

"The speculation by the public and some in the press that the parents assisted Brian in leaving the family home or in avoiding arrest on a warrant that was issued after Brian had already been missing for several days is just wrong," the statement continued.

In October, weeks into the search for Laundrie at Florida's Carlton Reserve, investigators found human remains and personal items including a backpack and notebook belonging to Laundrie.

The District Twelve medical examiner's office in Florida later said its investigation into Laundrie's death determined he died by suicide from a gunshot wound to the head.

In January, after the FBI reviewed the contents of the notebook found near Laundrie's remains, the agency said it found "written statements by Mr. Laundrie claiming responsibility for Ms. Petito's death."

Gabby Petito's parents are asking for a judge to compensate them for "pain and suffering, mental anguish, inconvenience, and the loss of the capacity for enjoyment of life experienced in the past and in the future."

There is not a monetary amount listed in the suit.

When reached by text, Bertolino told CNN he had no comment on the lawsuit.