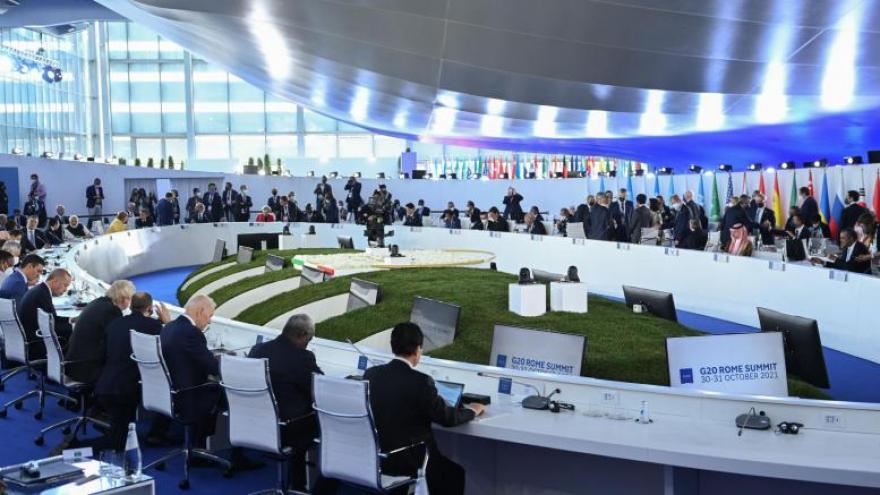 US President Joe Biden, third from right, and other world leaders attend the opening session of the G20 of World Leaders Summit on Saturday, October 30, 2021 at the convention center "La Nuvola" in the EUR district of Rome.

(CNN) -- The Group of 20's leaders' summit ended Sunday with an agreement on climate that commits its member nations to end coal financing by the end of the year and to aim to contain global warming to 1.5 degrees Celsius above pre-industrial levels.

But the final communiqué lacked firm pledges and failed to put an end date on the actual use of coal. It did not make any commitments to improve on issues like climate finance, paving the way for difficult negotiations at the COP26 summit in Glasgow, which kicks off in earnest on Monday.

In the final statement, the 20 biggest world economies said they "would accelerate our actions" to achieve net-zero emissions by or around mid-century. Leaders for the first time acknowledged officially that its members' emissions reductions plans, known as Nationally Determined Contributions (NDCs), needed to be firmed up over this decade to put them on track for net zero by 2050.

They said they recognized that "G20 members can significantly contribute to the reduction of global greenhouse gas emissions" and committed "to take further action this decade" on enhancing "where necessary" their emissions-reductions pledges for the year 2030.

Some countries' current contributions do not put them on track to achieve their net-zero goals for the mid-century, several analyses have shown. Scientists say that the world must halve emissions over this decade to have any chance of hitting net zero by 2050 and containing global warming to around 1.5 degrees Celsius.

"We recognize that the impacts of climate change at 1.5°C are much lower than at 2°C," the communiqué states. "Keeping 1.5°C within reach will require meaningful and effective actions and commitment by all countries, taking into account different approaches, through the development of clear national pathways that align long-term ambition with short- and medium-term goals, and with international cooperation and support, including finance and technology, sustainable and responsible consumption and production as critical enablers, in the context of sustainable development.

The G20 agreement reaffirmed the commitment for wealthy nations to transfer $100 billion a year in climate finance to the Global South, an existing agreement that has not been fulfilled. A recent report from the COP26 presidency showed that the world would not meet this target until 2023. It will also agree to the mobilization of money from financial institutions, especially development banks, to fill the gap and fund a global green recovery.

Mohamed Adow, director of the climate energy think tank Power Shift Africa, said the message from the G20 was "weak."

"This weak statement from the G20 is what happens when developing countries who are bearing the full force of the climate crisis are shut out of the room. The world's biggest economies comprehensively failed to put climate change on the top of the agenda ahead of COP26 in Glasgow," Adow said.

China, Russia and Australia among opponents of coal phaseout

It also included a first-time acknowledgment of the "significant contribution" of methane emissions to climate change and the need for its reduction. The US and EU are leading the Global Methane Pledge, which more than 60 countries have signed up to, agreeing to cut methane emissions by 30% over this decade.

"We acknowledge that methane emissions represent a significant contribution to climate change and recognize, according to national circumstances, that its reduction can be one of the quickest, most feasible and most cost-effective ways to limit climate change and its impacts," the communiqué read.

Methane emissions come largely from leaky fossil fuel infrastructure as well as livestock. Australia has said it will not sign onto the pledge. Other major methane emitters, including Indonesia, have signed on.

Several major producers or consumers of coal showed resistance to climate language in the G20 draft communiqué around decarbonization, especially around the use of coal, Bas Eickhout, an European Union member of parliament, who is close to the talks told CNN.

Japan led a group of countries at the G-7 meeting in June to soften language around decarbonizing power systems, and the country -- along with China, India, Australia and Russia -- want to ensure the language in the current G20 communiqué does not include firm commitments, said Eickhout, who is a member of the EU Parliament's delegation at the upcoming COP26 talks.

Russia was resisting putting an end date on the financing of coal projects abroad, a commitment the Chinese President Xi Jinping made in September at the United Nations General Assembly, Eickhout said, but added that Russia was showing some room for compromise.At a news conference at the G20 in Rome, Australian Prime Minister Scott Morrison said that there were "quite a large group of nations that are -- hold similar concerns about this" when asked about specific language related to coal.

"Well, those matters have been worked through, through the sherpas, and through the communiqué," he said.

"So we'll see what that lands in the next day or so."

That resistance from Australia was particularly noted by Jennifer Morgan, executive director of Greenpeace International.

"If the G20 was a dress rehearsal for COP26, then world leaders fluffed their lines," Morgan said in a statement. "Their communique was weak, lacking both ambition and vision, and simply failed to meet the moment. Now they move onto Glasgow where there is still a chance to seize a historic opportunity, but the likes of Australia and Saudi Arabia need to be marginalised, while rich countries need to finally grasp that the key to unlock COP26 is trust. "

CNN has reached out to officials in China, Japan, Australia and Russia for comment.