Furloughed from her job, she's now the 'Lasagna Lady' who cooks free meals for first responders and friends 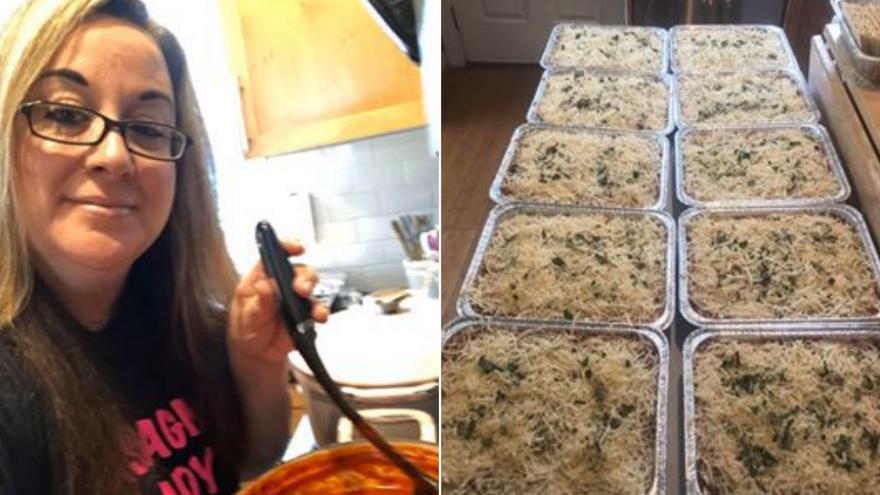 (CNN) -- When Michelle Brenner lost her job because of the pandemic, she decided to use her extra time and a family lasagna recipe to create a free food movement in her Washington community.

So far, she has made more than 1,275 pans of lasagna for friends, neighbors, first responders, and anyone in need of a good fresh meal -- without charging anyone.

For Brenner, this is a labor of love, and she has no plans to stop.

"I knew it was my time in my life to give back to the people who paved life's path for me to have the 45 years of life that I've had," she told CNN.

'Frozen lasagna is not a treat'

Brenner, who moved to Gig Harbor, Washington, about six years ago, was furloughed from work at a menswear store after Covid-19 hit. She quickly realized that she is not very good at sitting around.

She said she decided she wanted to help elderly members of her community and those who could not get out and shop for themselves because of the pandemic.

So, she signed up to work as a shopper for Instacart. She only spent two days working with the grocery delivery app -- but during that time she noticed one item her customers kept asking for: frozen lasagna.

One of those customers was a man in his nineties. Brenner said when she delivered the frozen lasagna and other items to him, he confessed to her that he had not had any fresh food in nearly a month and a half.

That moment inspired Brenner to do some grocery shopping of her own, and pick up the ingredients to make her family a fresh lasagna based on her grandmother's recipe.

"Frozen lasagna is not a treat," she said. "I am not a fan of frozen lasagna. I'm very Italian."

After her dish came out of the oven, Brenner jumped on Facebook to do what so many others have done throughout quarantine: Share her home cooked meal on social media. In her post, Brenner offered to make her lasagna and deliver it free of charge to anyone who wanted one.

When she received enough requests, she went to the store and spent her $1,200 stimulus check on ingredients and started cooking.

She made more than 130 lasagnas, and distributed them to those who requested it for free.

"The whole point of this is to spread that sense of community wherever we can through the comfort of lasagna," she said. "So, I don't want anybody to feel disincluded because reality is there are people out there who can't afford a dollar."

This is a one-woman operation. Brenner spends eight to 14 hours per day doing all the cooking herself. She spent the last 90 days working without a day off.

"Many of us go to work and want to go home right away... and I never had that feeling," she said of her recent cooking endeavor.

Brenner started the operation in her own home, pushing her kitchen to its limit and setting up a contactless food pantry in her front yard.

Recently, she said she was given free use of a commercial kitchen at the Gig Harbor Sportsman's club, allowing her to grow her operation.

The process of distributing the lasagnas has allowed Brenner to see the impact of her work first hand.

One family, she said, cried when she arrived on Easter because without the lasagna and other treats, they told her they did not have enough money to celebrate the holiday this year. Another man Brenner fed told her he had recently lost both his father and young son to Covid-19. One woman told Brenner she donated lasagna to the nurses taking care of her mother in an Alzheimer's ward.

Brenner said she feels her lasagna delivers more than just nutrition: It creates an opportunity for family members to bond.

"That's a family meal, that's time to sit together, that's memories making, that's conversations," she said. "It's something you'll remember the rest of your life."

Although she distributes the lasagnas for free, many in her community wanted to chip in. They decided to organize a series of fundraisers online to help Brenner keep the operation going. Over the last nine weeks, Brenner said they raised more than $23,000 for her -- which translated into 1,275 pans of lasagna.

"People say 'are you tired?'" Brenner said, "and I go, 'you know, I don't have time to think about that, I have lasagna to make.'"