Fuel is in short supply in Louisiana, which is a critical problem for the Hurricane Ida recovery effort, governor says 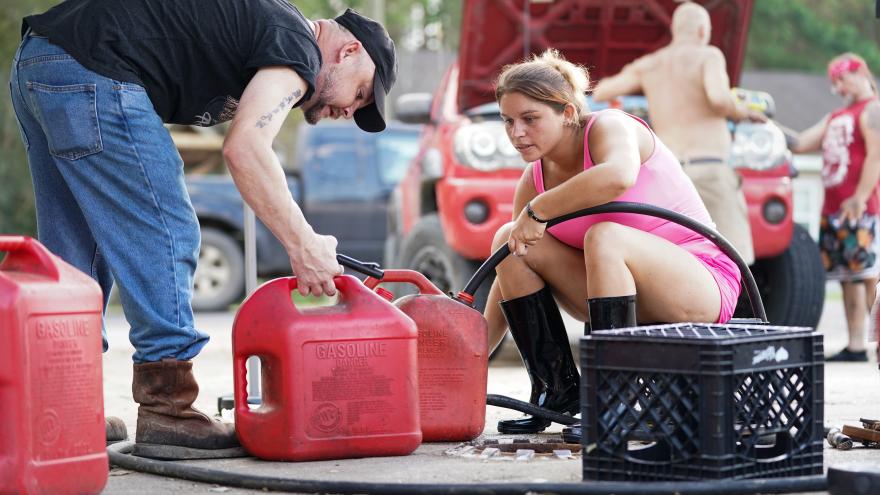 (CNN) -- Fuel is in short supply in Louisiana, where many residents are relying on gas-powered generators in the wake of Hurricane Ida's destruction, and the shortage is slowing the long and complicated recovery efforts, Gov. John Bel Edwards said.

More than 960,000 customers are still without power in the state, according to PowerOutages.US. And those in the hardest-hit areas could experience outages for weeks, the regional electric utility Entergy has warned.

As of Tuesday, as many as eight refineries were down, with one or two coming back up Wednesday, Edwards said, and the state is working with federal partners and with the business community to identify ways fuel can be brought into the state.

"Our people have taken a pretty good lick here from Hurricane Ida," Edwards said. "But our people are very resilient and strong as well. Having said that, we need all the help that we can get from the federal government, from the nonprofit sector, from the faith community, and certainly from us at the state level and working with our local partners as well."

When Ida slammed into the Gulf Coast on Sunday, the 16th anniversary of Hurricane Katrina, it was a Category 4 hurricane. It has since downgraded to a tropical depression and moved north, where its remnants caused heavy flooding Wednesday.

There have been at least five confirmed deaths tied to the hurricane.

As officials sift through the wreckage to assess damage, rescue residents and store infrastructure, the fuel problem is "impacting all of our recovery efforts," Edwards said.

In hopes of easing the strain, the Internal Revenue Service is waiving some penalties that are typically imposed when dyed diesel is used or sold for use on highways. By waiving the penalties, the IRS is paving the way for dyed diesel to be sold at some gas stations in Louisiana.

The limitations in fuel are just one obstacle the region is facing. Water may start to be restored, cell phone service partially returned and major highways progressively cleared for Lafourche Parish, but Lafourche Parish Sheriff's Office Captain Brennan Matherne still describes the overall conditions as "some improvement, but not much."

Efforts to save lives and expedite recovery

Recovery efforts have been on overdrive to match the magnitude of destruction officials say they are seeing in Louisiana.

By Thursday, there will be more than 8,000 National Guardsmen in the state, he added.

St. John the Baptist Parish Councilwoman Tammy Houston told CNN that her community has" never seen anything of the magnitude of Hurricane Ida."

Houston said traveling the area was like navigating a maze due to the number of power lines on the ground.

"I just want people to realize we are a little, small-knit community. We have had devastation before but we have never seen anything of the magnitude of Hurricane Ida," Houston told CNN over the phone.

The parish is without running water and has very limited gas supplies, she said. Houston said she expects the parish will be without power for at least 30 days.

During a Wednesday news conference, Livingston Parish President Layton Ricks said the damage was the worse he had seen in his 67 years.

On the seven-mile barrier island, Grand Isle, four feet of sand blocks the main highway and water and electricity lines that come through the marsh are destroyed, leaving the island with no fresh water gas, electricity or food, Mayor David Camardelle told CNN's Wolf Blitzer.

"We've been having a hell of a time. It was a miserable night looking at severe damages. Everywhere you look, there's no way, there's no way, it looks like bombs went off on this island," Camardelle said.

Hospitals inundated as some run on generators

The strain on the state has caused additional concern for hospitals, many of which were already overrun with Covid-19 patients.

In Mississippi, hospitals are inundated with Covid-19 cases and people seeking treatment for the impacts of the storm -- both those who live there and those who crossed state lines for help, Mississippi Department of Health Senior Deputy and Director Jim Craig said.

Federal resources are currently on the ground in Mississippi, but Craig said additional support for emergency services is still needed, which led him to request additional resources from FEMA and the federal Dept. of Health and Human Services.

Mississippi's hospitals are back on commercial power, Gov. Tate Reeves said. But in Louisiana, hospitals are running on generators, and the National Guard is working to bring them fuel, Louisiana Lt. Gov. Billy Nungesser told CNN's Kate Bolduan.

"Hopefully we won't have any more death toll, but I'm fearful it will climb, and it will climb by more than five," he said. "Just people that may have gotten in the attic or not been able to get out of the floodwaters, we're going to see more people that have perished in this storm."

Calls to the New Orleans Emergency Medical Services have jumped 185% due to the excessive heat and the fact that people don't have power to cool down, director Dr. Emily Nichols said.

She urged caution when using generators, highlighting the danger of carbon monoxide poisoning.