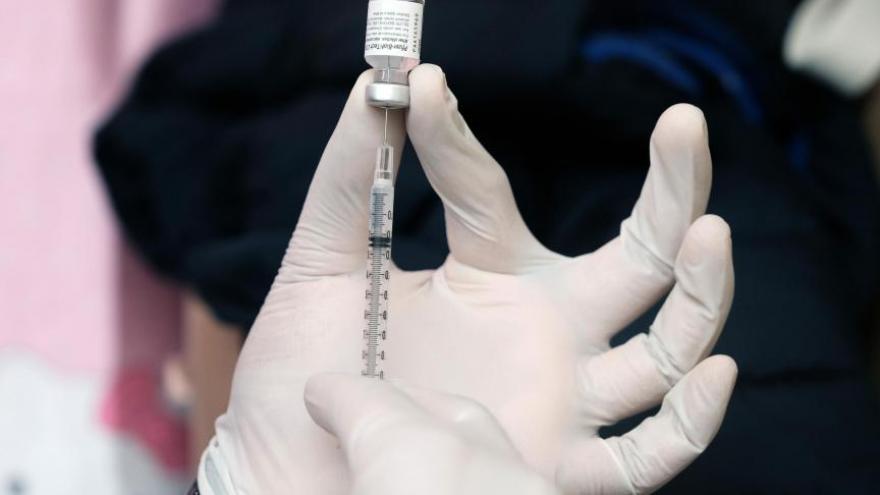 Frustration grows at US military bases overseas over the slow pace of vaccine rollout.

(CNN) -- Many members of the American military and their family members stationed outside the US are growing increasingly frustrated at the pace of the coronavirus vaccine rollout on overseas bases which is lagging behind the continental US.

Military families based in Europe are fully reliant on military health clinics at their bases to receive vaccines. They are not able to receive doses in the countries they are living in, and European Union countries are behind the US in the number of vaccines distributed to their citizens at this point.

"We're a bit stranded over here," Emily Starbuck Gerson, a military spouse based at Royal Air Force Lakenheath Air Force Base in England, said. "The UK and Europe has been much stricter in how they handled COVID, so a lot of us has been under these onerous lockdowns ... we're already so far from our support system and loved ones and navigating a global pandemic while living abroad ... so then not being able to access a vaccine on top of that is difficult."

Defense Health Agency Director Army Lt. Gen. Ronald Place said that the Department of Defense will open vaccine appointments to "all tiers" on April 19, which is consistent when President Joe Biden has said all adult Americans will be eligible to be vaccinated.

Place said that the Department of Defense decided to distribute 14% of the doses the Department received to overseas bases even though only 7% of the DoD eligible population live on them.

CNN spoke with more than a dozen people at bases in Britain, Germany and Belgium. They described a lack of transparency from military leaders about when doses were going to arrive. In some cases, no vaccines arrived for weeks and in one instance at a base in Germany, second doses were canceled for a group that had received a first dose.

"The latest update they've given is they're waiting on shipments, and they are expecting shipments in early May, but when you ask detailed questions, like when is this group going to be able to get them those typically get ignored," Franzis Dunn, a military spouse based in the Kaiserslautern Military Community in Germany, told CNN.

Overseas service members and their families rely on the military health care system and each base has a health clinic that serves its community.

"Because we're overseas, there's no ability to go off installation like you can stateside you know to a pharmacy or your state or whatever that you're stationed at doing a COVID drive, you can always get in with them, but here it's just not possible," a military member based at Supreme Headquarters Allied Powers Europe in Belgium said. "To say it's been problematic is I think being nice."

Military leaders speaking at the Pentagon about vaccine distribution overseas said that the Moderna vaccine has been the primary one shipped to Europe, because many bases overseas don't have the ultra-cold storage facilities to store the Pfizer vaccine.

Place said the recent issue at a facility in Baltimore that caused 15 million doses of the Johnson & Johnson vaccine to be thrown out "has affected" the Department of Defense vaccine allocation supply.

"We targeted the overseas community for our J&J vaccine supply, so we're actively exploring other means to offset this temporary shortage of the J&J product," Place said.

The Pentagon says the pace of overseas vaccinations will pick up.

"We should be able to vaccinate at least 100,000 beneficiaries in the coming weeks," Army Maj. Gen. Jill K. Faris of US Army Medical Command said during the briefing on April 8.

The Department of Defense has a tiered system to administer vaccines, much like the rest of the United States. In tiers 1a through 1c, essential workers, those who are about to be deployed, elderly and those with high-risk health issues are prioritized. Tier 2 includes everyone else.

People that CNN spoke with at bases in Europe said their bases are still working through tiers 1a and 1b, and some have started administering vaccines to those in tier 1c. During the press conference, Place said that some bases overseas and in the US are moving into tier 2. Updates from local military health clinics in Germany posted on Facebook suggest they had not reached phase 2 by Friday.

At US. Army Health Clinic Grafenwoehr, located at Tower Barracks in Germany which provides health care to 15,000 soldiers and their families, there were no vaccinations given last week, according to an update posted on Facebook on April 5. This week, the clinic is administering vaccines to individuals who meet the criteria for tier 1b and 1c, the update said.

At US Army Health Clinic Vilseck, which is located in the southern part of the Grafenwoehr Training Area, no vaccinations were given last week, according to an update on the clinic's Facebook page posted April 5. The update says they will continue to vaccinate populations in tiers 1b and 1c in the coming weeks. At US Army Health Clinic Hohenfels, which serves 6,000 soldiers and their families, no vaccinations were received last week or this week, and none were administered, an update from the clinic posted on their Facebook page on April 5 said.

For military members and their families based overseas, they rely on updates from their health clinics posted online and occasional town halls from their local military leaders. While military leaders have taken their questions on when the vaccine will become available, they often don't have very specific information to offer, the people CNN spoke with said.

"There hasn't been transparency. There really hasn't been a lot of information provided," a military spouse in Belgium told CNN. "They do these weekly updates on the health care page here, the health care facility, but they are just kind of the same thing copy and pasted every week."

Because of the lack of information and access, some have considered flying home to the United States to get a vaccine and then flying back, but they would have to take personal time and cover the expense of traveling out of pocket.

"I got an invitation to schedule a vaccine at my parents' house last week," the military spouse based in Belgium said. "I honestly considered flying back in order to get it, and I know that other spouses have done that."

Many who have grown frustrated with the lack of information from military leaders have reached out to members of Congress asking for more information.

Rep. Mike Turner, a member of the House Armed Services Committee, sent a letter to Secretary of Defense Lloyd Austin on March 17 asking the Secretary to prioritize sending vaccines to bases overseas.

"I understand the logistical challenges associated with distributing and administering the vaccine, particularly abroad; however, I want to ensure all DoD personnel have the opportunity be vaccinated so they can focus on the mission instead of the pandemic," Turner, an Ohio Republican, wrote in his letter to Austin.

Military leaders at the Pentagon say that vaccines will be shipped to bases overseas in the coming weeks.

"We have roughly 12,000 allocations arriving this week and should have a similar number if not increases arriving in the subsequent weeks," Faris said during the briefing. "As of this week, US army Europe and Africa has administered at least 37,000 covid-19 vaccine doses and 17,000 to fully vaccinated members in Europe."

In the meantime, those based overseas continue to check online for updates from their military health clinics and hope that their appointment comes soon.

"I think there'd be a lot less frustration if they came out and said, you know, we've had more cases in this situation, so we've decided to prioritize these people, so you're just going to have to wait. "Okay, I mean, I think most of us can wait, you know if it's explained why we're waiting" Valerie Avella, a military spouse based in Belgium, said. "Somebody must know why it's not here, or when more is coming."