'Frozen in time': Rescued film near Chernobyl shows life before the nuclear disaster 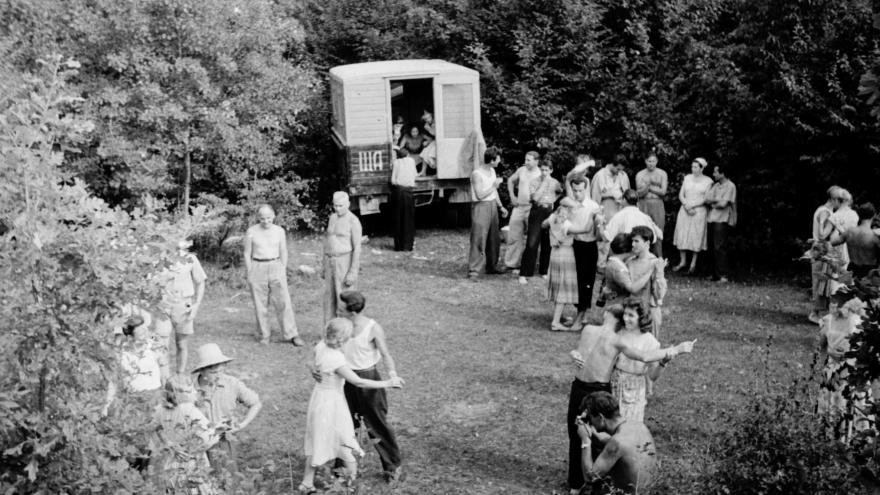 The Ukranian photojournalist has rescued some 15,000 artifacts from villages in the Chernobyl Exclusion Zone, including letters, photographs, and film negatives. Dondyuk restores and scans the film for his series "Untitled Project from Chernobyl," revealing the lives of the residents who once lived there. He has found images of couples posing for their wedding photos, family members smiling for group portraits, and residents playing guitar and dancing in the woods -- though much of the film has deteriorated due to radiation, weather or grime, leaving blotches and specks that give the images a haunting quality.

In an email to CNN, Dondyuk describes the Chernobyl Exclusion Zone as being "frozen in time" in the 1980s, after residents packed their necessities to evacuate from the radiation that was seeping into their towns.

"I was amazed at how the Soviet government evacuated these people, promising them that they would return in a few days, and not allowing people to take with them such priceless things as letters, (or) photos of relatives (and) friends," he said. "They didn't realize...that they would never be back to their homes where they were born, or where they lived their whole lives."

More than 100,000 people were evacuated from their homes in the worst impacted area after the nuclear reactor exploded, causing at least 30 deaths in the immediate aftermath. But thousands of cases of pediatric thyroid cancer in Ukraine, Belarus and Russia in the years following have also been linked to the incident, according to the World Health Organization. Dondyuk's own younger brother, Mykola, born in Nova Kakhovka, Ukraine, in 1987, one year after the disaster, spent his childhood sick in hospitals.

"It was the very first time I heard about Chernobyl accident, that probably, according to my parents and doctors, was the cause of my brother's illness," he explained. "It left an unforgettable imprint in the life of my family."

Over the course of five years, Dondyuk and his wife and studio manager Irina returned to the Chernobyl Exclusion Zone to extensively explore the region -- including a three-month expedition in the summer of 2021 during which they walked hundreds of miles through 20 resettled villages.

"I didn't expect to find such a huge archive," he said. "In the beginning, I thought there would be several photos and maybe some postcards."

Dondyuk has exhibited the project at photo festivals in Kyiv, Hamburg, and Bogotá, among others, and he and Irina regularly update an Instagram page dedicated to the archive. Mykola, now a filmmaker, has also begun a documentary about the making of the project. But the work is on hold indefinitely given Russia's invasion of Ukraine. Dondyuk now finds himself in a war zone and has been photographing Kyiv as it has been shelled by Russian forces over the past month. Meanwhile in the north, Russian soldiers are occupying the Chernobyl nuclear plant.

"I was able to finish the restoration step, and then the war started," Dondyuk explained. "So for now all the found (photographs) are restored and (organized) in folders and are waiting to be scanned. I'll be able to do (that) only after the war ends."

Over the course of the project, Dondyuk has added some of his own images to the archival materials as well, featuring new pictures of some of the found images' locations, after nature has had 30 years to reclaim the villages.

Much of the work ruminates on the ways that time leaves its mark -- through spots on a film strip's degrading emulsion, or the slow creep of moss on a wooden roof -- and how delicate the evidence of our lives can be. But in making the work, Dondyuk no longer associates Chernobyl with death and tragedy, but life.

"My favorite phase of working with this project is scanning (the) film, when I can finally see what is there on them -- people's emotions, their life, their (clothes), traditions," he said. "For everyone, Chernobyl is associated only with tragedy at the nuclear power plant and its consequences. But through these photos, films and letters, we get acquainted with the happy...people in the region before it was absorbed by the radioactive cloud."

Dondyuk has plans for a book and more comprehensive exhibition after the war, but he also wants to return to the villages around Chernobyl that he has yet to explore, to salvage more photographs before they deteriorate beyond saving, or are destroyed by nature. In 2020, wildfires broke out sending radiation levels there spiking.

"It is extremely important for me to find and preserve the surviving remnants of history of this region while we still have something to save," Dondyuk said.