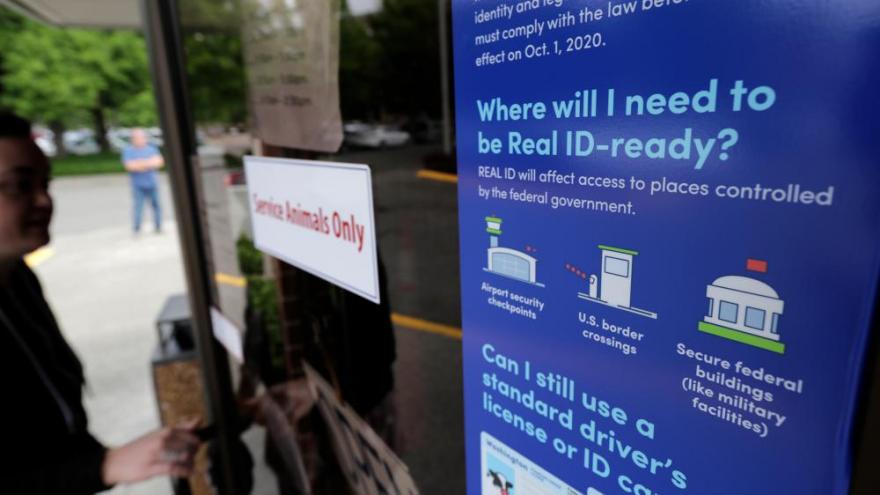 A customer opens the door of a Washington state licensing office on June 22, 2018, next to a sign about new ID requirements.

2020 saw massive protests over police brutality, economic insecurity brought on by the coronavirus pandemic and extreme weather events that again signaled the gravity of the climate crisis. And across the country, state legislatures and local jurisdictions responded to those and other issues with new laws and regulations.

From police reform to automatic college savings accounts, here are some of the new rules taking effect in 2021.

As people took to the streets to demand an end to violence against Black people at the hands of law enforcement, communities attempted to address some of the underlying challenges in a number of ways.

In Connecticut, law enforcement departments must take steps to better represent the communities they serve -- a provision that's part of a broader police accountability bill passed in the state last summer.

Units have been tasked with recruiting more diverse candidates to their ranks through mentorship programs, community outreach and affirmative action policies. Departments will also have to report their efforts each year to the Police Officer Standards and Training Council, a body whose makeup is also set to change.

Additionally, officers in Connecticut who make arrests or regularly interact with the public now have to prominently display their badges and name tags on their uniforms. All officers in the state will have to undergo a behavioral health screening every five years.

In Missouri, law enforcement officers will have to undergo an hour of training each year on recognizing implicit bias and de-escalating conflicts.

Your old driver's license might not be enough to get you through airport security next time you fly.

A security law that was passed after the 9/11 attacks is finally set to go into effect this October, after being delayed a year due to the coronavirus pandemic.

Starting October 1, travelers will need a REAL ID-compliant driver's license, US passport, US military ID or other acceptable identification to board a commercial aircraft in the US.

A REAL ID is marked by a star on the top of the card. It was born out of the federal REAL ID Act, which established minimum security standards for the issuing of state licenses and their production. Under that act, federal agencies are prohibited from accepting licenses from states not meeting those minimum standards for certain activities.

The Department of Homeland Security extended the deadline for states to comply with REAL ID requirements last year so that leaders could focus their efforts on the coronavirus pandemic.

Many low-wage workers around the country will see a boost to their paychecks this year.

Twenty states raised their minimum wage rates in 2021 -- some by pennies, others by a dollar or more. Some of the increases were part of previously scheduled efforts to adjust for cost of living, while others were aimed at moving toward goals like $15-an-hour minimum pay.

In New Mexico, the minimum wage will increase to $10.50, up $1.50 from the current $9 wage. And in California, the rate for employers with 26 workers or more will rise from $13 to $14 an hour, the highest statewide baseline in the country. In Minnesota, the gain is just 8 cents, to a $10.08 hourly rate for large employers.

The changes take on added significance after a year in which low-wage workers were hit especially hard by the coronavirus pandemic.

A new law in Illinois aims to chip away at the problem of rising college tuition costs.

As of January 1, every child born or adopted in the state will have $50 deposited into a college savings account.

That small investment is part of a new law that establishes the Illinois Higher Education Savings Program, which lawmakers hope will encourage families to start saving for their child's education early and will allow that money to grow.

In addition to a traditional four-year college, the money can also be used for vocational schools, two-year colleges and other institutions.

Hawaii made headlines in 2018 for becoming the first state to ban certain sunscreen sales to protect its coral reefs. Now, that law is finally in effect.

It's now illegal in the state to sell or distribute over-the-counter sunscreens containing oxybenzone and octinoxate, though wearing them is still allowed.

The chemicals in those sunscreens help protect the wearer from harmful UV rays.

But researchers have found that they also cause bleaching, deformities, DNA damage and ultimately death in coral when they're washed off beachgoers or discharged into wastewater treatment plants and deposited into bodies of water.

Delaware residents will now have to take care to bring reusable bags with them when shopping, as part of a new state law aimed at bolstering recycling efforts.

Under state law, most retailers can no longer offer single-use plastic bags at checkout. Eligible businesses can instead offer bags made of paper, cloth or other reusable -- and they can also choose to charge a fee for them.

"Each Delawarean uses about 434 plastic bags and that means nearly 2,400 tons of plastic bags end up in our landfills annually," Delaware Department of Natural Resources and Environmental Control Secretary Shawn Garvin said in a news release.

"A decrease by the public of plastic carryout bags can mitigate a large portion of this waste, and help our environment by reducing the amount plastic bags on our roads and waterways that can harm us and our wildlife."