From burning rubber to street racing, residents are 'Furious' about the influences of a movie franchise on the safety of their Los Angeles neighborhood 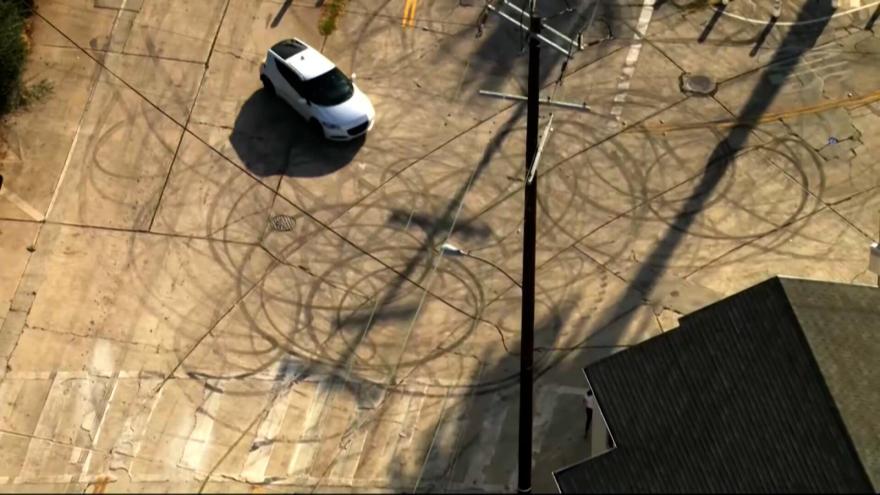 Fans of the films flock here in their tricked-out cars to show off what they can do, leaving circular skid marks from doing donuts and "swinging" around the intersection in front of the shop.

(CNN) -- Bob's Market in Angeleno Heights may look like a regular Los Angeles convenience store, but it's an icon.

In the Fast and Furious movie franchise, it was turned into Toretto's, the shop owned by the family of the character portrayed by Vin Diesel. Throughout the day, fans from all over the world stop to take pictures in front of the shop selling Fast and Furious paraphernalia beside the normal bevy of snacks and drinks.

But those movies -- known for their fast cars and daring stunts -- have left a mark on this neighborhood in another way. Fans of the films flock here in their tricked-out cars to show off what they can do, leaving circular skid marks from doing donuts and "swinging" around the intersection in front of the shop.

For the residents living here, it is more than a nuisance. They say the dangerous and illegal car antics happen at all hours of the day and night, endangering lives.

"They're coming around drifting, doing the donuts, spinning around like crazy with their mufflers sounding like explosions," said Bella, a longtime Angeleno Heights resident who did not want to give her last name, adding the smell and smoke from the burning tires lingers in the air, permeating their homes.

And it is not just the noise and sound pollution. The residents say reckless drivers are endangering their community.

Judy Lyness has lived in Angeleno Heights for more than 20 years and remembers when no one wanted to come there. But now, "you hear these screeches ... and it happens until the cops come," she said.

Dangerous "street takeovers," as they are known, are happening all over the country. In just the last week, an entire block in Des Moines was damaged by out-of-control cars; police in Salt Lake City arrested six people for illegal drag racing; in Chandler, Arizona, police say an illegal drag race left one driver dead; and near Chicago, a pedestrian was struck and killed in a crosswalk during what police believe was a street race. Another led to the destruction of police vehicles.

In Compton, California, mid-intersection rumble strips have done little to slow down the takeovers. In videos, cars can be seen rolling right over them.

Southern California has a joint Street Racing Task Force between the Los Angeles Police Department, the LA County Sheriff's Department and the California Highway Patrol. It boasts targeted crackdowns including vehicle impoundments, citations and gun seizures. It also promotes a weekly event allowing racers to drive on a drag strip and "burn rubber in the burnout box," but it hasn't slowed down the takeover of public streets.

"We're getting a lot of violent crime with these takeover groups. It develops a mob mentality," said LAPD Sgt. Jesse Garcia, an officer in charge of the task force. "We're getting looting at stores, we have shootings ... all directly tied to these takeovers."

The problem exploded during the pandemic, Garcia said, with 3,000 calls to police in 2019 skyrocketing to nearly 12,000 in 2021-- some people come from as far away as Texas just to join the takeovers, he added.

In Angeleno Heights, near the setting for the "Fast and the Furious" films, Garcia said they see a different issue: tourists appear to be the culprits. Garcia says burnouts, where drivers hold the brake and spin their tires to create smoke, tend to be more from individual cars, not the large-scale takeovers plaguing other parts of the city.

"We're doing direct patrols, and we're increasing them in frequency," he said. "The [Los Angeles] Department of Engineering is looking at that area to see what more can be done" to reconfigure the intersection.

'It's called vehicular manslaughter, but it was murder'

Some residents in Los Angeles have had enough, taking to the streets in protest last week, as filming was set to begin for the next movie in the franchise. One protester, Anna Marie Piersimoni, lost Larry Brooks, her husband of more than 30 years, when he went out for some exercise in May 2020, and never came home.

"The driver revved his car to 90, spun out, lost control. He hit my husband and six other cars which thankfully were unoccupied and parked. My husband had 10 minutes to live after that," said Piersimoni, who added posted street signs put the speed limit there at 35 miles per hour. "It's called vehicular manslaughter, but it was murder."

Since it was classified as vehicular manslaughter, Piersimoni said the punishment for the driver was less severe than if he had he been charged with murder. She said the driver, who was sentenced in April of this year, is already out of jail.

"He was there from early May until the middle of July," Piersimoni explained. "I think people will do less of this ... if they know that they're going to have much more serious consequences."

Reflecting on her husband, Piersimoni said Brooks, a psychotherapist, was an "amazing father" to their two children -- now both adults -- and possessed a "sweet, really gentle disposition." She now wears his wedding band on a necklace.

"I had a couple of medical adventures, and he was there for me every step of the way. Same when it happened to him. We took care of each other," Piersimoni recalled. "There's the old things -- a little photograph, a certain food that we might have enjoyed, you know, will make me choke up and cry -- but it's also the new things."

When Piersimoni sees footage of street racing, she gets angry.

"I feel furious. There's another meaning to that word in the movie, Fast and Furious," she said. "There's just no reason for it."

Even though she's moved across town since losing her husband, Piersimoni says she still hears street racing where she lives now. She and others are calling for a disclaimer to be added to the Fast and Furious films, convinced they glamorize street racing.

Universal Pictures did not respond to CNN's request for comment.

'I liked the rush, the adrenaline'

Hector Elizaolo said it was not a movie but peer pressure which drew him to street takeovers. His brothers turned him on to the burning rubber and the thrill of a wild ride.

"I liked the rush, the adrenaline," the 28-year-old told CNN. "The experience was cool."

It didn't last. As Elizaolo did donuts on a Covina, California street he had an audience: the police. Elizaolo was ticketed, and his car impounded.

"That day the police pulled me over I lost interest in it," he said. "I had to pay money to take my car out, I had to do community service and all this was a big waste of time."

As part of a court order, Elizaolo will take classes and meet with Lili Trujillo Puckett. He'll learn he is one of the lucky ones. No one died in his case, but Puckett will tell him about the daughter she lost in 2013 to a street race.

Puckett is sure reckless drivers cannot begin to understand what they've taken from the victims' families.

"When you lose a child, time will never heal because it's something that you keep with you forever. You actually miss that person more. I miss her voice. I wonder what she would look like now at 25," Puckett said, remembering her daughter Valentina.

Puckett started the non-profit, Street Racing Kills, after her 16-year-old was killed in 2013 when a teen who was driving the car she was in crashed during a street race.

"Valentina -- she hit her head, and then she went through the window," explained Puckett, who mentors street racers who have been punished by the courts, telling them, "Your whole dreams and your life is going away ... and you're going to have the other party telling you this what you took away from us."

Bella, the Angeleno Heights resident, wants the city of Los Angeles to do more to stop the street takeovers, and she does think the production company bears some responsibility, even though she said she "loved" seeing the filming happening in her neighborhood over the years.

"I'm not entirely blaming them for it because they don't have control over what the fans do, but they can take some sort of accountability to perhaps do a PSA that stresses and says this is not safe," Bella argued. "When that film comes out and things get a little bit crazy ... we pay the price."

She said her young daughter is constantly terrified someone is going to get hurt based on what she sees -- and hears -- happening in the neighborhood.

"Can you imagine a small child abruptly woken up in the middle of the night to what sounded like an explosion right outside her window?" Bella said, describing a common occurrence in her home. "She's crying, she's screaming, and she is literally out of control, and we're trying to comfort her as you're shaking from the sound that you just heard outside."

After so many of the Fast and Furious movies, Bella hopes the production will consider moving on to other locations.

"This is so dangerous for the residents that live here, and we're left behind to pick up those pieces when the production ends," she said.