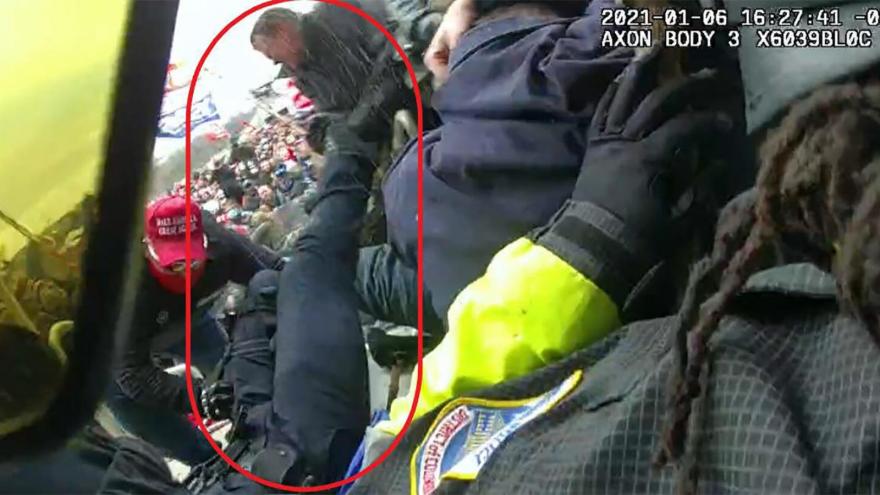 Clayton Mullins is seen pulling a police officer in video from a body camera on January 6, 2021 at the US Capitol.

(CNN) -- Friends and family members of a US Capitol rioter charged with dragging a police officer into the violent mob told a federal judge that he was actually trying to help the officer despite video of the harrowing incident showing him pulling the officer away from the police line.

Kentucky resident Clayton Mullins was charged with eight crimes tied to the incident, where an officer was dragged into the crowd and viciously beaten, leading to a tug-of-war between the pro-Trump rioters and other officers who tried to pull their colleague back to safety. Mullins is accused of dragging the officer into the mob and shoving another who was trying to save him.

Mullins has pleaded not guilty. His lawyers say he was "trying to rescue" the officer that he dragged.

He was arrested in late February and released after a few weeks in jail. He now wants to loosen the rules of his release, which require him to largely stay at home and to submit to location monitoring. The letters from his friends and family members, some of which defended his actions on January 6, were submitted as part of his effort to relax the home-detention rules.

"I have reviewed the video ... from my knowledge and knowing Clayton personally, it appears to me that he is trying to keep the 'MOB' from dragging the officer out of view. I believe if Clayton hadn't held on to the Officer's leg that Officer may not be with us today," wrote Carroll Graham, a friend of Mullins, who is a sergeant for the Illinois State Police and a Marine Corps veteran.

Mullins' in-laws, Patricia Rohrer and Bobby Rohrer, told the judge that he was "always helping people an[d] that was what he was doing on January 6th." They added, "I pray you will take a close look at this mess. You will see Clayton was helping the man. This is the way he is!"

"I searched out the video and watched it over and over, of Clayton trying to HELP someone. There was a mob scene there, BUT like I said, I KNOW this man, and he would NEVER NEVER NEVER NEVER do what he is being accused of doing," King wrote in her three-page letter.

King also pushed the false claim that law enforcement opened the doors and welcomed the rioters into the Capitol building: "The gates were so easily and willingly opened by the local police or security. Opened to allow people to just walk freely towards the building. they allowed this to happen and spun the story to fit the negative narrative."

These statements fly in the face of what a federal judge concluded after watching footage of the incident and listening to arguments from the Justice Department and Mullins' defense lawyers.

"The other police officer -- oh my goodness -- who was flat on his back being beaten, and (Mullins) was holding his leg so he couldn't get up and couldn't get back to the police line. I mean, it is frightening footage," Chief Judge Beryl Howell said at a court hearing in March.

Other people who submitted letters didn't defend his conduct but praised his character based on their experiences with him before January 6. A church treasurer and business owner, Mullins was described as a "God-fearing Christian" and a valuable friend who is always willing to help.

The letters were submitted to Judge Emmet Sullivan in a defense filing on Tuesday. He hasn't yet issued a decision about Mullins' release conditions. The Justice Department opposes the request.