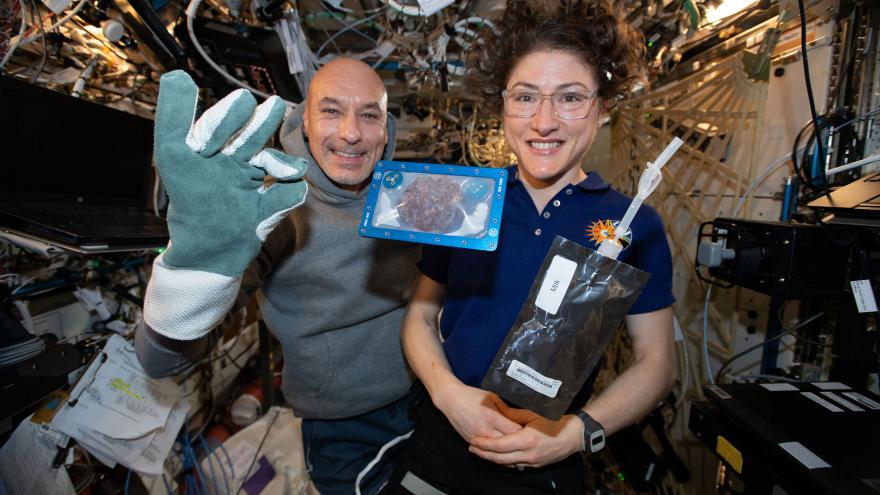 (CNN) -- The first batch of cookies in space have been baked in a zero-gravity oven, but the astronaut bakers didn't even get to try them. Instead, three of the five cookies returned to Earth on one of SpaceX's Dragon capsules on January 8 and were moved to cold storage in Houston.

But in a nice bonus, the International Space Station smelled like warm, fresh-baked chocolate chip cookies during the experiment in December. On December 26, NASA astronaut Christina Koch tweeted that they had space cookies and milk available for Santa on the station.

"I can smell it," said Luca Parmitano, European Space Agency astronaut and master baker of the cookies during the experiment. "And I do observe some chocolate melting. But it certainly doesn't look like cookie dough anymore."

Anything that brings the feeling of home is a great gift to the astronauts, especially those who spent the holidays in space. Parmitano recently talked about how even though they had Santa hats, stockings and a tiny Christmas tree on the station, it's nothing compared to spending time with their families and enjoying good food and traditions together.

Husband and wife duo Ian and Jordana Fichtenbaum, founders of Zero G Kitchen, developed the first zero-gravity oven that arrived on the space station in November.

In order to design the oven, they had to overcome issues like the lack of gravity -- which also impacts the ability to keep food secure and stationary -- and a limited power supply for the oven.

It's composed of a sleek, cylindrical chamber that houses an insertable silicone frame, which surrounds the food to hold it in place. Cylindrical heating coils focus the heat on the food in the center of the chamber and rise to temperature much more slowly than traditional ovens, to accommodate the power constraints.

Parmitano baked the dough in the oven, one cookie at a time, and Koch kept an eye on the cookies' progress.

Typically, DoubleTree's cookies bake in a convection oven at 300 degrees Fahrenheit for 16 to 18 minutes, the hospitality company said in a press release.

The astronauts tested out baking temperatures and times with the five cookies. And they learned that baking in space takes a long time.

The shortest baking time revealed that the cookie was under baked. At 75 minutes, the aroma of fresh-baked cookies began to fill the space station. The fourth and fifth cookies, with longer baking times, were deemed the most successful.

"While we have initial visual and scent feedback from the crew aboard the ISS, we're excited to dive into fully understanding the baking results -- including breaking down why the bake time and temperature in space varies from what we are used to seeing on Earth, as well as if the baking tray, which was designed specifically for microgravity, impacted the final shape of the baked cookies," said Mary Murphy, senior internal payloads manager with Nanoracks.

The cookies that were returned to Earth will be tested by food science professionals. They will also likely make their way to museum collections, like the Smithsonian National Air and Space Museum.