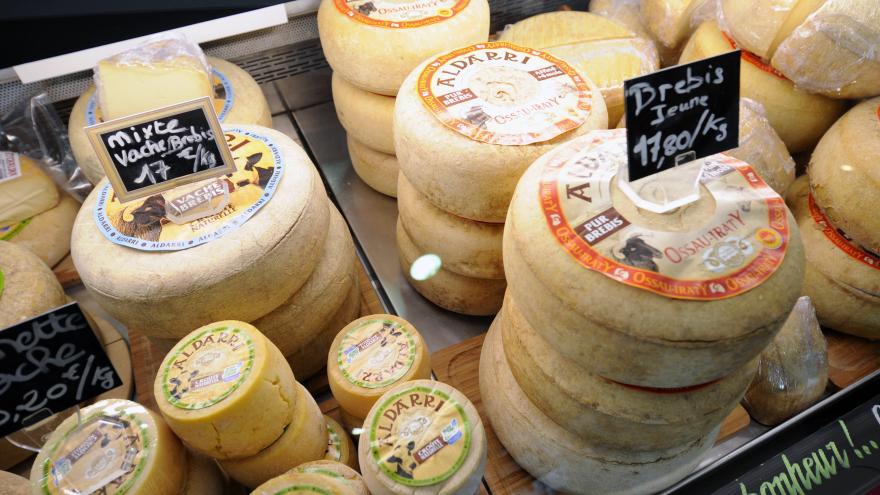 (CNN) -- French people are being encouraged to eat more cheese, after the country's coronavirus outbreak caused sales to melt and left farmers with wasted produce.

Michel Lacoste, the president of the National Council of Appellations of Dairy Origin (CNAOL), told CNN on Thursday that sales had slumped by 60% from the start of the lockdown on March 17 to April 10. He estimated that producers will be left with 5,000 tons of overstock at the end of the pandemic.

Lacoste said French consumers had "turned away" from cheese since the outbreak began.

"They changed their habits and turned to basic necessities," he said, leaving the industry facing a "huge loss."

"We farmers, producers, we were not confined. We didn't stop working. We worked every day," he said. "So eat cheese, make a fair trade act to maintain the French culture, the French tradition, the French heritage, that we all share."

The pandemic has poked holes in a cheese industry so synonymous with the country itself that former President Charles de Gaulle once famously asked how he was meant to govern a country that produced 246 varieties of cheese.

Non-essential shops have been shut in France for weeks, since the country entered lockdown in response to its Covid-19 outbreak.

"For 80% of cheeses, the shelf life does not exceed 8 weeks, and for some, even less than a month," CNAOL said in a press release on Monday, as it launched a campaign to encourage people to support the industry.

"A massive overstocking of 2,000 tons of cheeses of certified quality and origin was therefore instantly created," the group added. "Beyond the risk of causing immense waste, the sustainability of a sector is at stake and this could have major consequences for rural areas, for which this sector is often the only economic activity to be expected."

The group added: "Various players [in the industry] have been exposed to a sudden halt in cheese marketing channels."

Emergency measures are expected to continue in France until July 24.

But the government has signaled how the nation will creep out of lockdown, with some measures being lifted next week.

A second monitoring phase will follow from May 11 to June 2, and ministers will make a decision on the opening of bars, cafes and restaurants at the end of May.

The country has so far suffered at least 25,772 deaths from coronavirus, one of the worst tolls in Europe.

Washington state now has another bug to worry about after 'murder hornets.' Gypsy moths