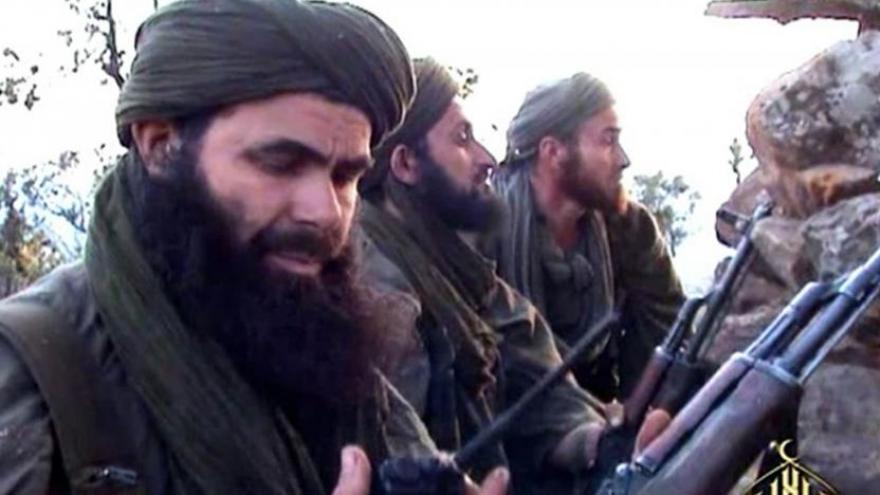 (FILES) In this undated handout file photo released by Al-Andalus on May 23, 2012 shows Abdelmalek Droukdel, aka Abu Musab Abdul Wadud, a leader of Al-Qaeda in the Islamic Maghreb (AQIM), with his fighters in Azawad, an unrecognized state in northern Mali. - Al-Qaeda in the Islamic Maghreb (AQIM) chief Abdelmalek Droukdel was killed on June 5, 2020 in Mali. (Photo by - / Al-Andalus / AFP) / RESTRICTED TO EDITORIAL USE - MANDATORY CREDIT "AFP PHOTO/ AL-ANDALUS" - NO MARKETING - NO ADVERTISING CAMPAIGNS - DISTRIBUTED AS A SERVICE TO CLIENTS (Photo by -/Al-Andalus/AFP via Getty Images)

"On June 3, the French armed forces, with the support of their partners, neutralized the emir Al-Qaida in the Islamic Maghreb (AQMI), Abdelmalek Droukdal and several of his close collaborators, during an operation in northern Mali," Parly wrote on Twitter.

AQIM is one of the oldest al Qaeda franchises and has a long history of operation in North Africa. Droukdal led the terror group for more than 15 years.

The US military assisted the French operation by providing intelligence that helped locate the target. US Africa Command confirmed that Droukdal was killed. The US assessment has concluded and was independent of the French reporting, according to the command.

"US Africa Command was able to assist with intelligence and (Intelligence, Surveillance, and Reconnaissance) support to fix the target," Col. Chris Karns, a spokesman for the command told CNN.

"This was a great example of cooperation and partnership to get after a common threat," he added.

A US military official described Droukdal as being involved in all aspects of the AQIM organization including financing, planning and the facilitation and execution of terrorist attacks, saying Droukdal "was responsible for the deaths of hundreds of innocent civilians."

Droukdal became leader of AQIM in 2004 and led the organization when it pledged formal allegiance to al Qaeda and its founder Osama bin Laden.

"The death of AQIM's founder and leader Abdelmalek Droukdal is a very significant breakthrough in countering terrorism in the northern and western regions of Africa, especially given the deep and in recent years growing concern among counterterrorism officials about the al Qaeda threat to the Sahel region," according to CNN Terrorism Analyst Paul Cruickshank.

"By fusing veterans of the brutal Algerian jihadi movement with bin Laden's global jihad and seeking common cause with an alphabet soup of jihadi militants from Mali to Libya to Burkina Faso, Droukdal was one of the principal architects of a generation of terrorist carnage across a large swath of the African continent," he added.

US officials believe he was actively seeking to expand the terror group's territory in ungoverned areas of Mali.

The French military has some 5,000 troops battling AQIM and other terrorist groups in North West Africa an area known as the Sahel.

The Pentagon is actively weighing reducing its military support to French forces in northwest Africa which includes intelligence, surveillance and aerial refueling of French military aircraft.