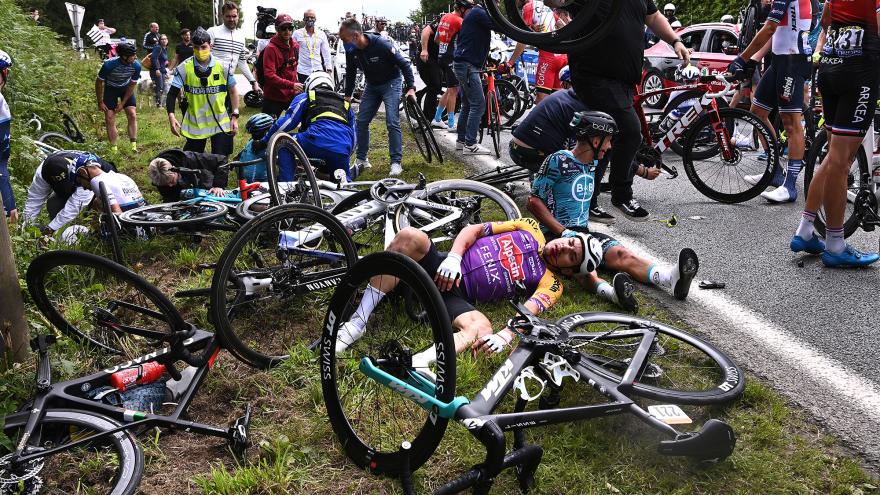 (CNN) -- French authorities have launched an investigation after a fan caused dozens of cyclists to crash during the Tour de France on Saturday.

The disastrous fall was caused by a woman standing on the roadside of the Tour's opening stage.

She stepped in front of the racing pack holding a cardboard sign, appearing to display a message for the television cameras.

According to the race's video coverage, the sign hit German rider Tony Martin who was cycling near the head of the pack. Martin fell, which led to the subsequent crash of dozens of riders behind him.

Cyclists fell en masse and the crash left bikes and bodies tangled in the road. The fall held the race up for several minutes.

Law enforcement officials from the Finistère area in western France have opened an investigation into the cause of "unintentional injuries....by manifestly deliberate violation of an obligation of safety or prudence" according to a statement on Facebook.

Authorities have launched a call for witnesses as the woman left the scene before investigators arrived, according to the Facebook post.

A spokesperson for Amaury Sports Organization, the Tour de France organizer, confirmed to CNN the company had made a complaint to the authorities.

According to the Tour de France website, three riders have withdrawn from the race following Saturday's first stage, including German rider Jasha Sutterlin who was involved in the crash.

His team, DSM, said in a statement that Sutterlin was "taken to hospital for examinations which revealed no broken bones, but a severe contusion to his right wrist that will require further examinations back at home."

The crash derailed the race, with it taking almost 25 kilometers for the peloton to fully regroup.

It was the first of two major crashes during the stage, with the second 8km from the end involving four-time champion Chris Froome and many others.

The 2012 Tour de France winner Bradley Wiggins said he had no sympathy for the fan involved, who may not have meant to cause such a crash.

"They're part and parcel of the spectacle of the Tour de France," he told Eurosport. "And this year, in particular, being able to come back onto the route and watch it. I don't know how you police it."