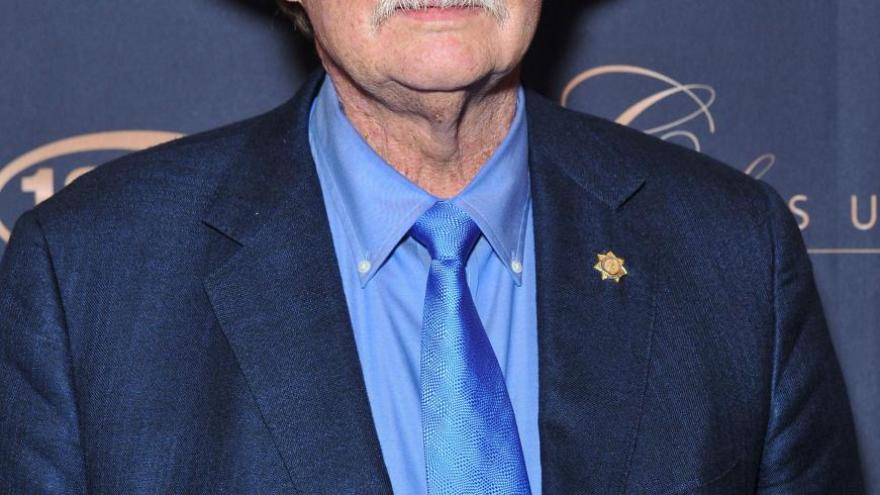 Make-A-Wish co-founder Frank Shankwitz has died. He is shown here attending a party at Allure Banquet & Catering on July 11, 2018 in Van Nuys, California.

Shankwitz passed away on January 24 at his home in Prescott, Arizona, of esophageal cancer, Kitty Shankwitz said. He was 77 years old.

"Frank's passing has created a loss in our lives that will take time to heal," his family said in a statement on his Facebook page. "However, we are comforted knowing that the legacy he left will continue to carry on in all those who knew him."

"The number of lives he touched throughout the world with the creation of the Make-A-Wish Foundation, his career in law enforcement, his service in the Air Force, as well as the impact he made through all the other organizations he gave his time to in recent years, is a testament to the man he was," the statement said.

Make-A-Wish, which grants the wishes of children with severe illnesses, traces its roots back to 1980 and a 7-year-old boy with leukemia named Christopher Greicius. According to the Arizona Department of Public Safety, it was Chris' dream to be a Highway Patrol motorcycle officer like the characters on his favorite TV show, "CHiPs."

Shankwitz was among several AZDPS officers who made Chris' dream come true, making him the first and only Honorary Arizona Highway Patrol Officer, a position that came with his own uniform, a badge and motorcycle officer wings.

Chris died just a few days after his wish had been fulfilled, and Shankwitz led the funeral procession in Illinois, according to AZDPS.

The experience inspired Shankwitz, along with his wife and several others, to found the Make-A-Wish Foundation. Shankwitz was the organization's first president and CEO.

Today, Make-A-Wish says it grants a wish to a child every 34 minutes in the United States and its territories thanks to the help of thousands of volunteers and donors. The organization also grants wishes to kids in about 50 countries on five continents, it says.

Shankwitz was an AZDPS officer until his retirement in 1996, but he remained an AZDPS reserve detective. He then went to work for the Arizona Motor Vehicle Division's Office of Special Investigations, the AZDPS says, before retiring in 2001. After that, AZDPS assigned him to the Prescott PD Cold Case Unit. He resigned in 2014 after 42 years of law enforcement service.

Shankwitz later went on to write a memoir, and his life inspired the 2019 film "Wish Man."

"Make-A-Wish is deeply saddened to learn of the passing of Frank Shankwitz," the foundation said in a statement on social media, describing Shankwitz as one of six individuals who started the foundation.

"Thanks to all our generous founders, more than 500,000 children with critical illnesses worldwide have had the chance to experience the long-lasting, life-changing benefits of a wish."