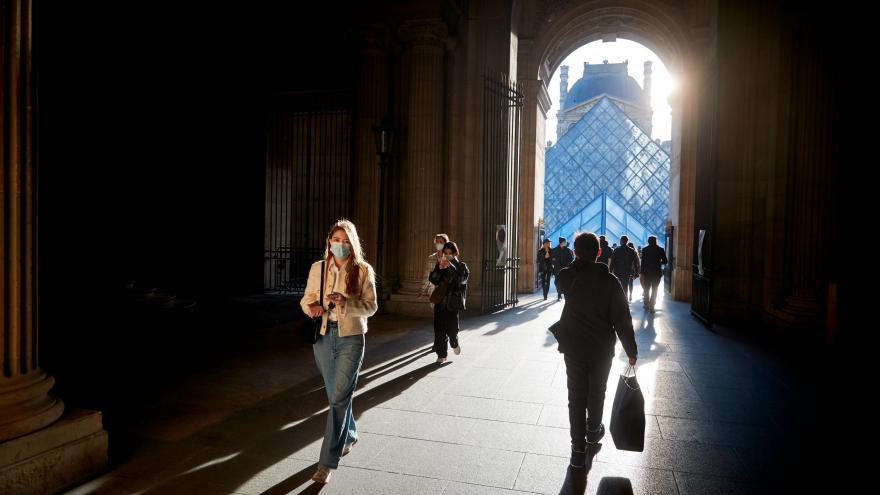 (CNN) -- The Omicron variant's rapid spread across France has prompted the government to slash Covid-19 isolation times for vaccinated people and move to further isolate the unvaccinated from public venues in a bid to ease the financial and social burdens of the outbreak.

Self-isolation times for fully vaccinated people who test positive will drop from 10 days to seven on Monday -- and can be cut down to five days with a negative test result, Health Minister Olivier Véran told the weekly Le Journal du Dimanche on Saturday.

"Unvaccinated people will have to isolate themselves for 10 days, with a possible exit after seven days under the same conditions," Véran said.

France reported 219,126 new infections on Saturday and became the sixth country in the world to surpass 10 million total recorded cases of Covid-19.

The rule change also means contacts of positive cases will not be required to self-isolate as long as they are fully vaccinated, but they will have to test regularly, Véran said.

Changes have also been made to the time period in which people should receive their booster shot. From February 15, a booster dose will need to be taken four months, instead of the current seven months, after a second dose in order to be considered fully vaccinated.

The new rules come into place on Monday, when French lawmakers will also examine a bill that would limit the unvaccinated from accessing restaurants, bars and other public venues, according to the proposed legislation published on the National Assembly's website.

Since July, a number of public venues and establishments have required a health pass for entry, demonstrating either proof of full vaccination, proof of a negative test or proof of recovery from the virus.

The bill aims to replace the health pass regime with a vaccine pass, which requires proof of full vaccination or recovery from Covid-19, meaning the unvaccinated would no longer be able to rely on a negative test to access venues. The vaccine pass would not be required in the workplace or essential healthcare of social services.

If adopted, the new rules are expected to enter into force on January 15.

Véran emphasized the importance of getting vaccinated as he expressed hope that France's fifth wave "may be the last."

"Omicron is so contagious that it will affect all populations of the world. It will lead to enhanced immunity, we will all be better armed afterwards. But to put the maximum chances on our side, we must continue to immunize the planet urgently, especially in countries where access to doses is more complicated," he said.

Focus on the unvaccinated

The bill would also empower staff in bars, restaurants and other venues to conduct identity checks on their customers if they have "doubts" about the authenticity of their vaccine pass or suspect they are using someone else's pass.

There could be penalties for establishments that fail to check the authenticity of the vaccine passes, and the bill will strengthen sanctions on fraud where the use of someone else's pass could be punishable with a 1,000 euro fine ($1,137). The use of a fake pass will remain punishable with a five-year jail sentence and a 75,000 euro fine ($85,304).

Center-right and center-left opposition lawmakers said they will not oppose the bill, but far-right party National Rally and far-left Untamed France have vowed to vote against it.

"Since the vaccine does not prevent either contracting or transmitting the virus, I call upon the government to give up on the health/vaccine pass," tweeted National Rally leader Marine Le Pen.

Roughly 73% of people in France are fully vaccinated, higher than the 68% average across the EU, according to data by the European Centre for Disease Prevention and Control, and many countries have been moving towards vaccine mandates to compel higher vaccine uptake.

In November, Austria became the first Western country to announce it would require citizens to get Covid-19 shot. Germany last month banned the unvaccinated from accessing all but the most essential businesses, like supermarkets and pharmacies.