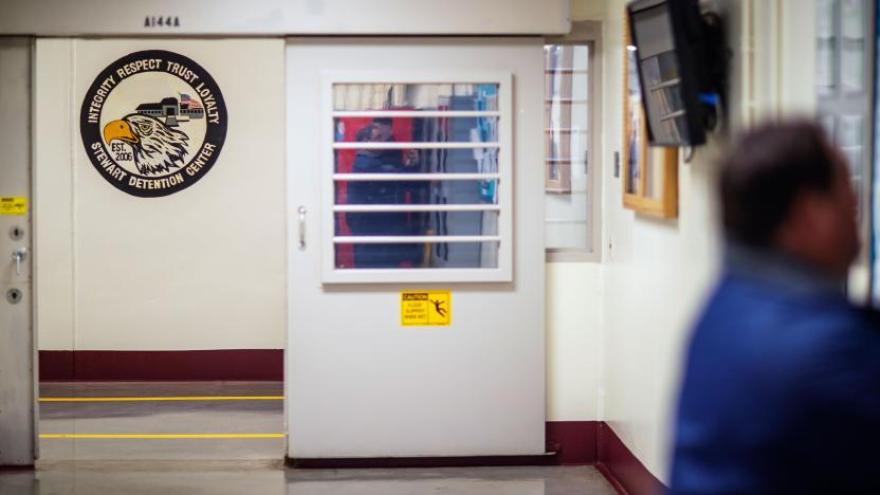 A door closes inside the Stewart Detention Center in Lumpkin, Georgia, on November 15, 2019.

A nurse at the privately run Stewart Detention Center in Lumpkin, Georgia, according to the complaint, took advantage of his position to coerce the women "into giving him access to private parts of their body without medical justification or need."

The Southern Poverty Law Center and a coalition of advocacy organizations filed the administrative complaint Tuesday with the Department of Homeland Security's Office of Civil Rights and Civil Liberties. It accuses Immigration and Customs Enforcement and private prison company CoreCivic of enabling the nurse's alleged actions and failing to protect and care for people in their custody.

The complaint details the accusations of four women identified with pseudonyms and described as detainees held at Stewart in late 2021 and early 2022.

Two of the women notified Stewart officials of the nurse's alleged behavior while they were in detention, according to the complaint, which alleges the women were "brazenly retaliated against through aggressive and accusatory interrogations and threats of prolonged imprisonment."

The nurse's name is redacted in a copy of the complaint the organizations released to the media Wednesday. The complaint, first reported by The Intercept, says the nurse continues to work and see patients at Stewart.

CoreCivic has denied the allegations

A spokesman for CoreCivic, the private company that operates the detention facility, said in a statement released to CNN that an internal administrative investigation of two of the women's accusations found one woman's claim to be "unsubstantiated" and the other's to be "unfounded."

Those women were released from Stewart before the investigation concluded, CoreCivic spokesman Matthew Davio said.

"We have very little information regarding the claims made by the other two women, but will investigate them thoroughly if and when we receive that information," he said.

The nurse was placed on administrative leave during the company's investigation, Davio said, adding that there have been no allegations against the nurse before or since.

"As he was cleared of all allegations, the nurse is still in our employ," Davio said. "We unequivocally deny any claims of threats or retaliation."

ICE also said its administrative investigation into the initial allegations determined they were unsubstantiated.

"Two allegations remain under investigation and ICE continues to follow all appropriate protocol" for reporting and investigations, an ICE spokesman said in a statement. "Any individual -- ICE employee or contractor -- suspected of sexual abuse or assault is immediately removed from contact with detained individuals until the completion of the investigation."

The agency has "a zero-tolerance policy for all forms of assault, including sexual abuse," the spokesman said, adding that facilities are required to notify ICE of all sexual abuse or assault allegations and notify local law enforcement of allegations involving potentially criminal behavior.

CNN has also reached out to the Department of Homeland Security and the Stewart County Sheriff's Office for a response to the allegations.

What the former detainees say happened

The complaint filed this week alleges that the two women who reported the nurse while detained were repeatedly accused of lying by officials at Stewart and warned that if they continued with their complaints their detention could be prolonged, they could be charged and they could face up to seven years in prison. The complaint also alleges that food was withheld from one of the accusers.

At a press conference in Atlanta Thursday, advocates accused authorities of dismissing the women's complaints and threatening them rather than protecting them.

"How many times have we seen this? How many times -- that survivors are disregarded, not believed and vilified," said Amilcar Valencia, executive director of El Refugio ministry, an organization whose volunteers are in regular contact with Stewart detainees and their families.

"To the survivors," he added, "we as a community are saying today that we hear you, that we believe you, that we stand by you, and we thank you for being brave."

The complaint outlines a series of allegations against the nurse.

In one instance, the nurse allegedly put his penis in a woman's hand during a medical exam, ordered her to lower her pants and tried to touch her below her waistline. When that woman, identified as "Maria Doe," attempted to report the alleged assault to officers at the facility, the complaint alleges that she was "subjected to repeated interrogations and accusations that she was lying."

In other instances, the complaint alleges the same nurse inappropriately touched women who'd come to him seeking medical help.

A woman identified as "Marta Doe" alleges that when she went to the medical unit for chest pain, the nurse had her remove her shirt and bra, then placed a stethoscope on her bare chest. On another occasion when she sought treatment for an injured wrist, the complaint says that the nurse "grabbed her hand and insisted that she remove her pants." In that instance, after she repeatedly refused, the complaint says, the nurse "gave up and told her to calm down."

"It has really affected me. I have become insecure and fearful, because the only person who could help me with my pain wanted to hurt me," she told CNN, adding that the experience has caused her to have nightmares. The woman, who is seeking asylum, asked to be identified by the pseudonym used in the complaint to protect her safety.

Marta told CNN she was detained from September to November 2021 and didn't report the incidents when they occurred because she was afraid she'd face retaliation and would be forced to spend more time detained. But she says she told her attorney what had happened as soon as she was released from custody, and felt it was important to join the complaint and share her story now, because she's afraid others could get hurt.

"There are a lot of us, the women who were abused mentally and physically. And he is still there," she said. "I'm afraid he's still causing harm."

Immigrant advocates are calling for a 'thorough investigation'

The organizations are requesting removal of the nurse from Stewart, an investigation into the facility and records related to the cases, among other things.

Erin Argueta, the initiative's lead attorney, said the complaint was filed with the DHS civil liberties office because that division is tasked with investigating allegations of abuse in ICE detention.

"We hope for a thorough investigation, with transparent results and follow-up," she said.

Lawsuits also could be possible in the future, she said.

The Stewart Detention Center is one of the largest ICE detention facilities in the country and was the subject of the 2018 CNN series, "Inside America's Hidden Border."

The facility had housed only male detainees for years, but ICE began holding women there in late 2020, several months after accusations of high rates of hysterectomies and medical neglect surfaced at another Georgia detention facility.

For years immigrant rights advocates have criticized medical care at Stewart -- and in the wider ICE detention system -- alleging inadequate staffing, delays in care and neglect.

CoreCivic's spokesman said Wednesday that the safety, health and well-being of detainees is a top priority.

"It is CoreCivic policy to aggressively investigate all allegations, regardless of the source, and support prosecution for those who are involved in incidents of sexual abuse," Davio said.