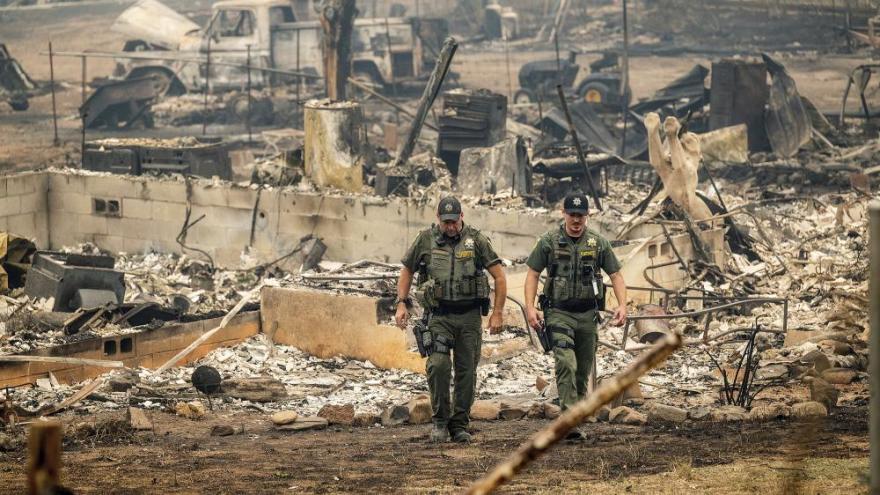 Officials have identified four people killed in the McKinney Fire in California as residents of the same community. Sheriff's deputies leave a home where a McKinney Fire victim was found on August 1, in Klamath National Forest, CA.

(CNN) -- Officials have identified four people killed in the McKinney Fire in California as residents of the same community.

Kathleen Shoopman, 73, Charles Kays, 79, Judith Kays, 82, and John Cogan, 76, were all residents of Klamath River, the Siskiyou County Sheriff said in a tweet on Friday.

The fire started in late July and burned over 60,000 acres, destroying nearly 185 structures, including 90 residences, in northern California. The massive blaze erupted in the forests near the California-Oregon border and is the largest wildfire in California so far this year.

As of Saturday, the fire was 95% contained, according to the California Department of Forestry and Fire Protection. In addition to the four deaths, 12 people were injured during the fire, says the department.

Fire crews numbering 948 personnel continue to battle the blaze, identifying and extinguishing the remaining hot spots and removing dangerous trees. All evacuation orders within the fire footprint were lifted on Thursday, according to a tweet from the Klamath National Forest official account, although "there is still a significant threat of toxic materials and debris."

Persistent drought in California set the stage for the fire's rapid spread, according to officials. High temperatures and low humidity combined with dry thunderstorms enabled the flames to quickly overtake thousands of acres.