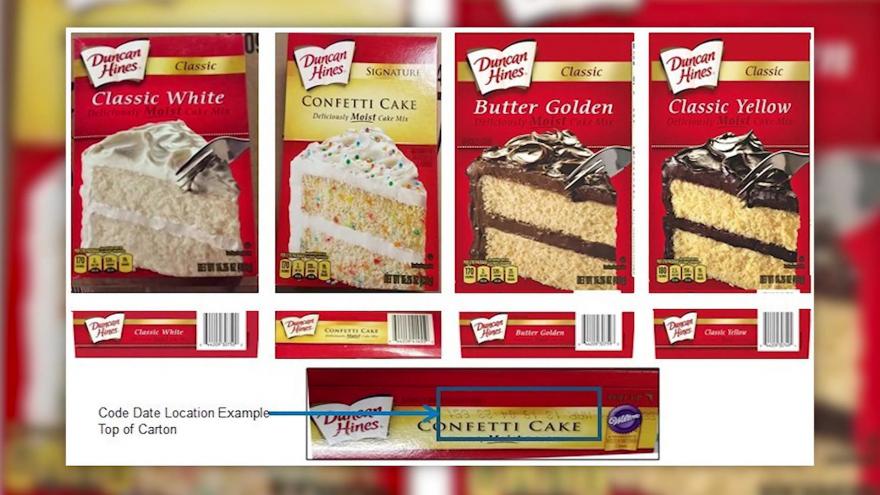 (CNN) -- A recall was issued for four types of Duncan Hines cake mix due to possible salmonella contamination, the US Food and Drug Administration said Monday.

The voluntary recall was issued by Conagra Brands due to "a positive finding of Salmonella in a retail sample of Duncan Hines Classic White cake mix that may be linked to a Salmonella outbreak that is currently being investigated by CDC (US Centers for Disease Control and Prevention) and FDA," Conagra said in a statement.

Several of the individuals who are sick told health investigators they consumed cake mix before their symptoms began, according to Conagra.

Symptoms of salmonella illness usually begin 12 to 72 hours after consuming something tainted with the organism and last about four to seven days. They include diarrhea, fever and abdominal cramps. Most individuals recover without treatment. In some patients the diarrhea can be so severe that hospitalization and antibiotic treatment are required to prevent the illness from spreading from the intestines to the blood stream and elsewhere in the body.

Conagra noted that some of the sick individuals could have eaten the mix raw rather than cooked. "Consumers are reminded not to consume any raw batter. Cake mixes and batter can be made with ingredients such as eggs or flour which can carry risks of bacteria that are rendered harmless by baking, frying or boiling," the Conagra statement said.

"While it has not been definitively concluded that this product is linked to the outbreak and the investigation is still ongoing, Conagra has decided to voluntarily recall the specific Duncan Hines variety identified (Classic White) and three other varieties (Classic Butter Golden, Signature Confetti and Classic Yellow) made during the same time period out of an abundance of caution," the company said.

The recalled cake mixes were distributed nationwide and to some international exporters. They are all 15.25 oz boxes of mix.

"The FDA is advising consumers not to bake with or eat any recalled cake mix," the agency said. Retailers should no longer sell these recalled mixes and consumers who have recalled mixes should contact Duncan Hines or the store where the mix was purchased for a refund.

As part of the ongoing investigation into the outbreak the FDA said it is inspecting the Conagra facility where the recalled cake mixes were produced and collecting environmental samples there.