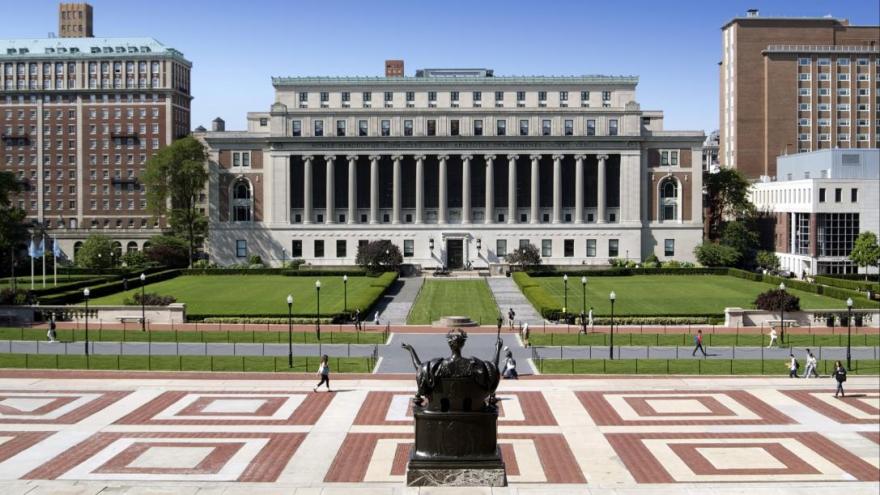 A Columbia University student walking down a street on Manhattan's Lower East Side saved a man from dying from an opioid overdose using training he received at the university.

(CNN) -- A Columbia University student walking down a street on Manhattan's Lower East Side saved a man from dying from an opioid overdose using training he received at the university.

Justin Tsui, a first-year student in Columbia's psychiatric mental health nurse practitioner program, spotted the man lying on the ground, not moving and propped up by just a backpack. Tsui noticed slow breathing, constricted pupils and a weak pulse -- all symptoms he had been trained to look for in an overdose victim.

Tsui administered two doses of naloxone nasal spray from a kit he carried, waiting 2 1/2 minutes between the doses. The man woke up shortly after the second one.

"The next, I think, 24 hours I was in a daze," Tsui recalled, noting he didn't usually carry the backpack containing the naloxone kit. "I thought, 'What are the chances that I bump into someone who's overdosing?'"

Tsui isn't the only Columbia student to save someone who was overdosing. In the span of about six months, there have also been three other Columbia University students across the city who have saved lives. The students had all attended opioid overdose prevention sessions at the university where they received kits containing naloxone nasal spray, capable of reversing an opioid overdose.

Last September, Matthew Linsky, a senior at the School of General Studies at Columbia, saw a group of people huddled around an apparently unconscious man outside the subway station at 110th Street and Broadway. He worried whether using the naloxone kit would only make matters worse. But then he recalled the advice of the professor who trained him, who said the only possible side effect was a runny nose -- so he ran to get it from his apartment a few blocks away.

Shortly after he administered the nasal spray, Linsky said he saw the man being taken away on a gurney, lively and talkative. "It's this weird feeling of terror beforehand, and then pure elation after," Linsky said.

In 2018, the US surgeon general issued an advisory recommending that more Americans carry naloxone. The drug, sold under the brand name Narcan (among others), can quickly restore normal breathing in someone suspected of overdosing on opioids, including heroin and prescription pain medications.

In 2018, there were 1,444 drug overdose deaths in New York, the city's Department of Health reported. Every day, 46 people in the United States die from overdoses related to prescription opioids, according to a study cited by the Centers for Disease Control and Prevention.

Since early 2018, Columbia has provided naloxone training to more than 2,500 students, faculty, staff and community members, according to the university. Facilitators are registered and trained with New York City's Opioid Overdose Prevention Program (OOPP), which provides free kits for the university's program.

Kellie Bryant, an assistant professor at the Columbia University School of Nursing, is the medical director of one of the school's Opioid Overdose Prevention Programs. She provided training to three of the four Columbia students who saved lives by using their naloxone kits, including Tsui.

She said students can be trained in only one session, lasting 20 minutes to an hour. The program is popular and most classes are over-booked, she said.

Bryant told CNN she is extremely proud of her students who had the courage to use their naloxone kits in these situations.

Training sessions are offered at the university's medical center campus, where the majority of trainees are graduate students, and at their Morningside Heights campus, composed primarily of undergraduate students.

A key factor stressed in training is not to worry about administering the naloxone, because it has no effect on people who have no opioids in their systems, said Michael McNeil, chief of administration for Columbia Health and the program director who trained Linsky.

"If it looks like it might be an opioid overdose you must act as (if) it is because you cannot hurt the person," McNeil told CNN.

Tsui and Linsky voiced hope that other people would take the training and carry naloxone kits. "I truly believe that we can limit the damage of the opioid crisis by training more people and at the very least making it common knowledge how to identify the signs of an overdose," Tsui told CNN.

Neither Tsui nor Linsky had any further contact with the strangers whose lives they helped save.

"I don't know anything about this man, but he could be someone's father, loved one, brother, friend etc," Tsui wrote to CNN. "Occasionally I might get hit by a flashback of that day and now in hindsight, because I can replay how everything unfolded, I'm struck by how 'close' to death he was—and that thought strikes fear and sadness in my heart."